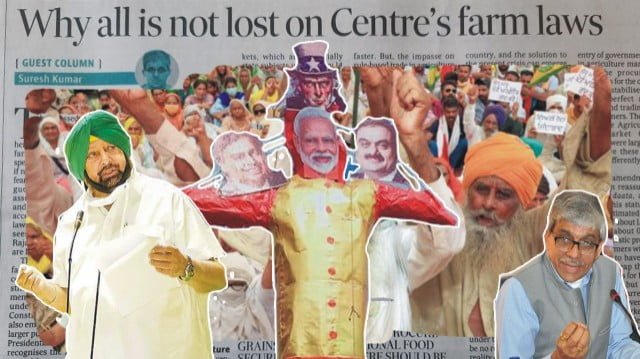 PUNJAB CHIEF MINISTER’S principal staff officer, Chief Principal Secretary Suresh Kumar has proposed a novel way out that can enable the Centre to wriggle out of the aggressive farmers’ agitation against the recent central legislation on sale, purchase, procurement and marketing of agriculture produce, by amending the Food Security Act and offering a legal protection for MSP, thus satisfying all sides involved.

“[A] solution to the present crisis can emerge from the pith and substance of the National Food Security Act (NFSA) 2013,” Suresh Kumar, who perceivably enjoys the absolute confidence of Chief Minister Amarinder Singh, wrote this week in a national daily.

Making it clear that “Views are strictly personal,” Kumar’s intervention, titled, “Why all is not lost on Centre’s farm laws“, gives a peep into the ongoing thinking in power circles looking for the most pragmatic way out at a time when neither the Centre nor the state government can ill-afford any escalation in the farmers’ agitation.

The solution proposed by Suresh Kumar will give a legislative protection to the MSP, thus satisfying the most contentious demand of the farmers, while allowing the Centre to claim that the bills it passed have finally been understood by the protestors and the agitation was merely because those opposed to Prime Minister Narendra Modi had misled the people.

Whether Kumar’s solution enjoys the blessings of CM Amarinder Singh or not, but it will certainly interest all stakeholders involved. In its simplest form, it argues that since the National Food Security Act 2013 makes it obligatory upon the Centre to procure food grains for the central pool through FCI and other procurement agencies, just ensuring the MSP protection in the Act via an amendment will assuage any fears of the farmers.

Kumar has argued that government purchase of food grain for national food security could be mandated at a fixed MSP, a step that would assure “the 6% farmers of the original green revolution states of Punjab, Haryana, and Western UP” which are the most perturbed by the Centre’s move.

“Minor amendments to the NFSA can reassure the farmers: the Ann Datta of the country about their future. This statutory assurance is estimated to involve a subsidy of about 1.10 lakh crore, which is about 0.60 percent of GDP,” Kumar estimates.

“Such a statutory assurance of entry of government agencies in agriculture markets, apart from procurement of food grains for the central pool, will also stabilize the otherwise imperfect agriculture market and trading in favour of the farmers. The regulations under APMCs were largely targeted to achieve these objectives, though differently in different states,” he said.

While farmer unions are raising many concomitant issues, including federalism, the fact is that the agitation is largely predicated on the issue of legal/legislative/statutory guarantee for MSP. In fact, the leader of the one of the most powerful farm unions, Bharti Kisan Union (Ugrahan), Sukhdev Singh Kokri Kalan, is already on record that his union will consider withdrawing the agitation if MSP is protected.

“The government should put a clause that if any company purchases our goods below MSP, they should be booked and fined. Or the government should pay the difference to us…If they add these clauses, we can think of accepting these bills,” Kokri was quoted saying in the Indian Express (See October 22, 2020 edition; Page 8).

In such a scenario, Suresh Kumar’s proposed solution can hit the bull’s eye.

While Suresh Kumar’s views could indeed be personal, the fact that this line of thinking is coming from the senior most staff officer of the chief minister and is being put out in the public domain will widely be seen as Punjab putting out an idea that can help pull out the Centre from an unenviable position.

At a time when the BJP in Punjab, while putting up a brave face, is flailing against the tidal waves of public anger and its leaders are publicly shunning the party, or risk not only a political death but even a social boycott, such a solution will be god sent.

Political analysts have been stressing that the ruling party at the Centre needs to act fast before the agitation seeps into cities, towns and suburban areas, a development whose signs are already readily visible, but is at a loss about the way forward.

Conceding that “the central farm legislations are now a reality,” Kumar reflected on the fact that “some states are evolving measures and preparing counter or complementary legislation to protect their interests” but argued that “hardened political positions may not lead to easy solutions.”

Experts said there is a clear understanding that CM Amarinder Singh’s move to call a session of the Punjab Assembly and get it to pass three State Amendment Bills to apparently negate the adverse impact of the central farm legislations was, at the end of the day, merely a political stratagem since there is little likelihood of Punjab’s laws passing the hurdle of presidential assent, required under Article 254 (2).

In any case, farmers will have to do better than merely forcing the Legislative Assembly to pass showpiece laws when the Constitution has Article 251, which gives any central law supremacy over a state law in case of any conflict.

If Rajasthan and Chattisgarh also jump on to the same bandwagon, it will only harden positions further. Politically, one wonders if Amarinder Singh wants to be the man leading the charge of the Congress brigade against a pet project of Narendra Modi. On the other hand, if the Amarinder Singh government, the Narendra Modi-led Centre and the agitating farmers can come to the same page through a solution that protects MSP, it will be a winning bet for all sides concerned.

Interestingly, on most issues, Amarinder Singh has proven himself to be more nationalist than even many in the BJP, toes a hard line on Pakistan and Khalistan, went head to head with the Canadian premier Justin Trudeau on issue of support to radicals, backed the Army officer who trussed up a Kashmiri citizen on the bonnet of a jeep and used him as a human shield, and is a hawk on Kashmir. His positions are often at variance with those of Rahul Gandhi, and he is perhaps one of the most staunch nationalists in the Congress.

Any such solution to a problem in which the Centre finds itself stuck in quicksand will help the Punjab CM politically, too, and will turn him into a solution-oriented statesman politician. Besides, the opposition parties will find it very difficult to pick a bone with Amarinder Singh if the solution involves a legislative protection for the MSP.

As Kumar wrote, with most of the food grains (45 million) for the central pool being procured annually from Punjab, Haryana and Western UP at MSP, and with the Centre under statutory obligation to procure food grains under the NFSA, “there should be no reluctance to reflect the reality of MSP also in this law, if not in the recent farm laws.”

Suresh Kumar, in his article, does concede that “states have been weakened” when it comes to agriculture and markets, which are essentially state subjects under Entry 14 and 28 of List II- State List of the Constitution.

He reminded that in the past, even while dealing with subjects in the concurrent list, the Centre used to concede “some space to the states for local and contextual amendments and adjustments.”

“This has made our federal system work for over seven decades, without any major constitutional breakdown in the country,” Suresh Kumar wrote.

Now there is a solution out there in the marketplace of ideas, and those who incessantly ask what must be done, would be seriously looking at the National Food Security Act 2013, a piece of legislation that was never an agenda of the BJP and was close to the heart of Sonia Gandhi, the liberal leader of a nationalist Amarinder Singh.

PrevPreviousShambhu Morcha and Khalistan: The Many Anxieties of Punjab Protests
NextCBI has always been partisan but it has now touched its nadirNext
Author Related Post
Related Post