Can political arithmetic of SP downplay communal polarisation of BJP? 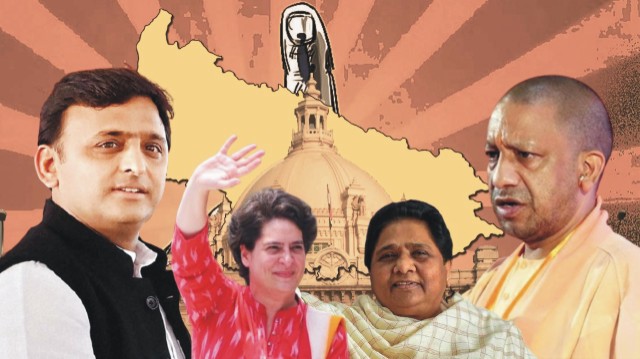 Many political analysts believe that an alliance between BSP and SP at this stage will be a perfect game changer. But will that happen is the big question?

These days even when we think of polls, be it assembly or Lok Sabha, the first thing that is reflected in our imagination is polarisation, as if polarisation has become synonym of elections. Hardly, even before the dates of elections are declared, political parties pull up their socks and political strategist start pushing agenda of hate to create a perception on the given political chessboard.

The political parties in Uttar Pradesh are hitting the campaign trail aggressively and trying to manoeuvre political strategy in order to match the political aspiration of the people in the state. In every election, in the recent past, in Uttar Pradesh in particular and other states in general the election campaign begins on a mild note but eventually turns out to be a battle of pure political arithmetic and communal polarisation. We have seen it in Bihar and in West Bengal.

As the political temperature rising ahead of assembly elections in Uttar Pradesh, new political slur and terms are being derived targeting Muslims by BJP leaders during their campaign speeches to polarise the sentiments of the people in the state.

The deputy chief Minister stirred up controversy when his tweet appeared to be a call to party workers and supporters to prepare for the Shri Krishna Janmabhoomi in Mathura. According to him, during SP regime ‘lungichap’ goondas carrying arms used to terrorise the people and traders and grab their lands.

Further, UP BJP president Swatantra Deo Singh has compared Akhilesh Yadav’s regime to that of Mahmud of Ghazni. BJP is trying to exploit every situation to polarise the political atmosphere in the state ahead of elections. We can see, on each passing day, a new low in terms of language used and the hate speeches of worst kind to score political mileage and communalise the atmosphere.

The BJP MP from Ballia, Ravindra Kushwaha said, when Narendra Modi-led government can repeal three farm laws it can also withdraw the Places of Worship (Special Provisions) Act, 1991 in order to pave way for the construction of a big temple at Sri Krishna Janmabhoomi in Mathura.

The BJP MP while speaking to reporters on 5 December said, “The BJP has a clear view regarding Ayodhya, Kashi and Mathura from the very beginning. These three religious places are a matter of faith for us. Our religion is associated with these religious places. Our origin from Mathura, Ayodhya has been decided, work is on in Kashi and now it is the turn of Mathura.” 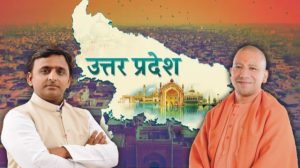 It has now become clear that the BJP is trying to set the political pitch on divisive agenda and Mathura seems to be the focus area of the political battle field. On 6 December, which marks the anniversary of demolition of Babri mosque there was heavy deployment of security in Mathura. On this day, Akhil Bharat Hindu Mahasabha had threatened to install a Krishna idol at the Shahi Idgah.

According to Praveen Rai, Political Analyst at the Centre for the Study of Developing Societies, Delhi, “The prominent political parties in UP have sounded the poll bugle for the forthcoming assembly elections and have revealed their electoral strategies for the crucial state election competition.

While, the Congress, shepherded by Priyanka Gandhi Vadra is planning to mobilize women voters by promising 40 percent of the seats to female candidates, the SP led by Akhilesh Yadav has stitched an alliance with a smaller caste based localized parties for maximizing the benefits of ‘First-Past-the-Post Voting System’. The political eclipse of the BSP and Congress in the state has turned the election into a bi-polar contest between the BJP and SP, with Chief Minister Yogi Adityanath and Akhilesh Yadav locking horns in communal chest thumping for electoral one-upmanship.”

On how crucial is assembly elections in Uttar Pradesh, Praveen said, “The election victory in UP is extremely crucial for both the BJP and parties opposed to it as it will provide a political force multiplier and electoral advantage to win the Lok Sabha elections in 2024. The media narrative of BJP winning state elections primarily due to communal polarization and consolidation of Hindu votes is a hyperbole, as the victory of regional parties in Delhi and West Bengal elections reveal that the majority of the electorate are swayed by issue dimensions of good governance and policy implementations rather than religious and communal issues.”

On the impact of UP polls on national polity, he said, “The BJP and SP are accusing each other in public platforms of religious appeasement and using communal rhetoric to polarize Hindu and Muslim voters respectively. However, the election in UP will be mainly decided on Yogi Adityanath’s effectiveness of governance and enforcement of rules. The communal card played by them will mobilize their religious constituencies, but it will not be enough to secure a win in the elections. The UP election will be a referendum for the BJP and its outcome will play a key role in determining the future course of Indian politics.” 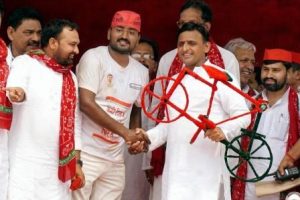 In Uttar Pradesh alliance is shaping up very fast for the Samajwadi party. Smaller groups and parties are moving closer towards SP. So far the party has made alliance with a dozen smaller parties. Alliance formation would be the key factor in this election. Many political analysts believe that an alliance between BSP and SP at this stage will be a perfect game changer. But will that happen is the big question?

On political arithmetic of Samajwadi Party, Professor Afroz Alam, Head of Department of Political Science, Maulana Azad National Urdu University, MANUU, said, “Can opposition parties take advantage of the weak moment of a dominant ruling party? The answer lies in the outcome of the forthcoming UP assembly election. Unlike many elections in the past, 2022 electoral contest will be bipolar and more specifically between BJP and SP.

While observing the trends in UP politics, I can argue with a tolerable degree of certainty that the SP’s strategy of social engineering may fail against the spiritually hegemonic design of BJP, if the social engineering and alliance with small parties are not in tune with the prevailing hyper-discontents among the voters.”