PM speeches are the face of India’s fight against Coronavirus 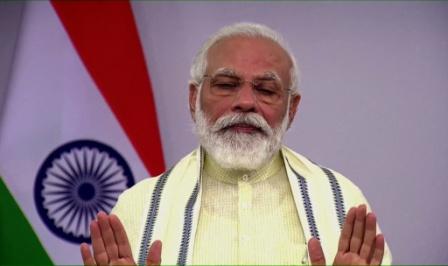 The Covid-19 contagion is an unprecedented calamity not only in India but all over the world. Not only do we not know enough about the Coronavirus, its behaviour, its spread, its effect on those it afflicts, its impact on society and economy.

It has been six months now but we have not been able to either find a cure or a vaccine to stop it. Yesterday, we clocked one crore cases world-wide.

Some nations have managed to contain the spread, others have not. In India, we are at a stage where we are now in the grip of a rising graph of cases and casualties.

We are adding one lakh cases every fifth day and had over five hundred deaths in one day yesterday. Is it because the contagion is what it is – unpredictable?

Or is it because in spite of all the bravado we have heard in the past few months, we as a nation have failed because of unclear directions right from the top?

There is no doubt that India woke up late to the emergency. The first case had come to Kerala on January 30 but we were busy with the Delhi elections, the Trump visit, the anti-Muslim pogrom, the change of government in Madhya Pradesh.

Even when the World Health Organisation had declared Coronavirus a pandemic, we issued denials. Then when cases started rising in China, Italy, Spain, and other nations, we panicked.

The Prime Minister’s first speech related to the contagion was full of bluster and heroism.

In imitation of western countries who were thanking their healthcare personnel, he asked us to observe a Janata curfew on March 22 and beat plates and ring bells. It seemed anachronistic to what was really needed to fight the contagion but was a way to boost public morale.

Two days later, with merely a four hour notice, the PM declared a total lockdown for 21 days. At that time we had five hundred cases and one death. More than the Coronavirus, the sudden lockdown panicked the people. It was a reverse of emotion to where we were a few days back.

There were two big responses. One, in the absence of viable transport, the migrant labour across all states simply started walking back home. Two, civil society got activated, started raising donations and giving out ration kits to the daily wagers, migrant workers, and poor people.

The PM addressed the nation again and again. The lockdown was extended. The migrant exodus continued. The civil society kept responding. The cases and deaths kept growing.

Until the economy started breaking but there was no respite in cases or deaths. Increasingly it was clear that the Central government had failed to safeguard the society against the spread of the contagion.

The PM addresses, growing tepid and weaker each time, became the picture of what the contagion was doing to the nation.

In the last few weeks, the PM morphed from a well-groomed, confident, energetic persona to yesterday when he looked tired, haggard, old patriarch whose is not heard. The point is not that India did not listen to him.

The fact is India did listen.In fact a bit too much, keeping its own questions at bay.But at the same time, India saw the government and administration absolutely fail in being able to address the contagion or the economy.

The worst aspect of the lockdowns is that they should have given the government and administration enough time to prop up the public care infrastructure that remains diminished but they did not do that.

The worst aspect of the speeches is they should have relayed a sense of trust the people can find in their leader but the actions on the ground belied that.

While the people listen to the PM, they also see what is going on: government not caring for the tens of lakh migrant workers going home, using the pandemic to open up key sectors of economy to private investors, announcing a Rs 20 lakh crore package which is basically an elaborate loan scheme, passing ordinances to the agriculture sector, not convening a Parliament, PM not conducting open press meet in the last six plus years, all demonstrate an ad-hocism and lack of transparency.

To add insult to injury, the BJP has in fact has started campaigning in Bihar for elections.

When the PM yesterday claimed to have given rations to 80 crore people in the last few months and expressed the intention to continue doing that until November, one gapes at the statement in amazement.

The fact is the Public Distribution System mandates that every family below poverty line is eligible for 35 kg of rice or wheat every month, while a household above the poverty line is entitled to 15 kg of foodgrain on a monthly basis. This should happen in normal times, not a calamity.

Yet, we know how broken is the PDS system owing to corruption and faulty parameters of ration cards. If there was any aid from government to the poor it was a measly one or three kilogram rice, some lentils, perhaps some vegetables. It was woefully inadequate.

In fact, even though they worked with best intentions, even the civil society’s aid was inadequate. In such a scenario to appropriate the work of citizens by the government is a blatant misrepresentation of facts.

To top it there was not a word for farmers or for the whole agrarian sector that has made this possible and whose big struggle is how much ration is wasted by inclement weather.

There was not a word for labour who work in industries and who have lost employment or the huge job losses the people are facing day by day.

Then there was no word on other challenges India faces – on the border with China, on how cyclone Amphan devastated Bengal.

Three years back a judge had remarked that we have a PM of BJP and not of a nation. This rings true even today.

What would be most useful at a time like this is that the PM stops giving his one-way talks and genuinely engages in an open Question and Answer with the press broadcast live to the nation. Yes, there will be much he would not be able to answer but that would be a start to being transparent and accountable to the nation.

Else, look at the history of fall of all great civilizations in the world. The reasons are always starvation, plague, external attacks, lies and apathy from those governing. Surely, we do not want India to end up as a failed nation.

PrevPreviousKartarpur Sahib Corridor is a test of India’s policy towards its neighbours
NextModi ⁠— PM of the country or just BJP?Next
Author Related Post