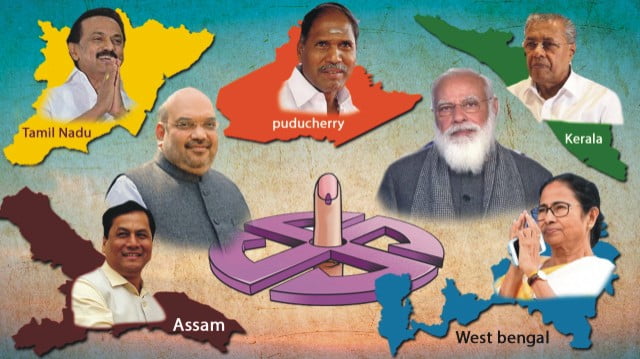 One of the biggest takeaways from the outcome of the assembly polls in West Bengal, Kerala, and Tamil Nadu is the dominance of strong regional straps like Mamta Banerjee, Pinarai Vijayan, and M.K.Stalin, who can win on their own. For the national leaders, it may be a good idea to groom local leaders and avoid imposing them from Delhi. 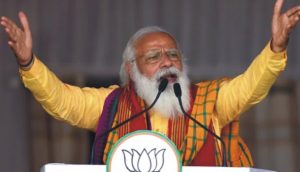 The results of five assembly elections may force a change of approach of the national parties in the ensuing assembly polls next year.

Especially given the fact that even the most popular leader like Narendra Modi cannot guarantee victory for the party.

But, general elections to Lok Sabha would be a ­different story, as Modi may not have a proper challenger.

In West Bengal, analysts believe that Bharatiya Janata Party’s five-point strategy, including polarization, did not work as Bhadralok (elite class) did not support BJP, and Bengali Pride worked in favour of Mamta Bannerjee.

The BJP simply had no answer after she turned the battle into a Daughter of Bengal versus outsiders’ fight.

Corruption as an issue did not pay dividends to the BJP as it thought it would. The man on the street was not impressed with corruption charges as for them the image of Mamata Banerjee, dressed in simple cotton saree and hawai chappals were the epitome of simplicity.

For the BJP absence of a chief ministerial face cost it dear and the fight became Mamata versus Modi affair. Clearly PM failed to help Bharatiya Janata Party win.

The RSS too frowned at the borrowed leaders from other parties and felt this affected the morale of the dedicated old BJP workers, who seemed overshadowed by turncoats.

Finally, BJP’s promise of ‘Sonar Bengal’(golden Bengal slogan) could not work in the face of the Daughter of the soil theme.

The RSS had cautioned BJP about the over-dependence on Modi, Shah for elections. It also strongly opposed relying on borrowed leaders as their ideological commitment could be in question.

The RSS had worked hard for 40 years to create a base in West Bengal but defections of 34 MLAs from Trinamool Congress demoralized its old leaders and cadres.

Observers feel that regional leaders like Naveen Patnayak, Arvind Kejriwal, Udhav Thakre, Nitish Kumar, Lalu Prasad Yadav, Prakash Singh Badal, Mulayam Singh Yadav , Mayavati etc (Some of them have been replaced by younger ones) are popular amongst the masses and cannot be unsettled by popularity ratings of national leaders.

Chances are they may not be able to win assembly elections. The Congress too persists with the policy of imposing leaders from Delhi, resented by rank and file. Due to this, it has also lost some leaders to BJP.

In Bengal, Bharatiya Janata Party gave tickets to 13 defectors out of whom only five could win, showing people’s dislike for these ‘Aya Ram Gaya Rams’.

BJP’s aggressive bid to expand its footprint across South and East has been blunted by strong regional leaders in the face of a strong Hindutva campaign and a popular Prime Minister.

The Bharatiya Janata Party can find some comfort in retaining Assam and winning the consolation prize of Puducherry.

Congress party’s slide continued as it failed to win any of the three states it contested on its own. It needs a serious introspection before assembly polls in Uttar Pradesh and Punjab next year.

It was purely ‘Charishma’ and fifty years of grooming that helped DMK president MK Stalin, who unseated the AIADMK after its ten-year rule. The BJP had sought to enter TN aggressively and had arm-twisted AIADMK into an alliance.

In all this, the DMK’s alliance partner, Congress got a fresh breath of air, winning 18 out of the total 25 seats it contested. The BJP could win only four out of 20 it contested.

Kerala chief minister’s unprecedented victory in Kerala has kept communist’s legacy intact whereas it has evaporated in a state like West Bengal, where its cadres have shifted to BJP.

In Bengal, the Bharatiya Janata Party has to rest content with a huge increase of its seats from three in 2016 to 77 in 2021. Mamata, and master strategist Prashant Kishor fought an all out battle against the entire might of the BJP after assessing is strengths and weaknesses.

The BJP had won 18 seats in 2019 election to Lok Sabha, translating into leads 122 seats with 44.64 percent of votes. This time, the BJP won only 77 out of them and the vote share too fell from its parliament poll performance.

Also Read: Article 21 of the Constitution – ‘Right To Life’ compromised