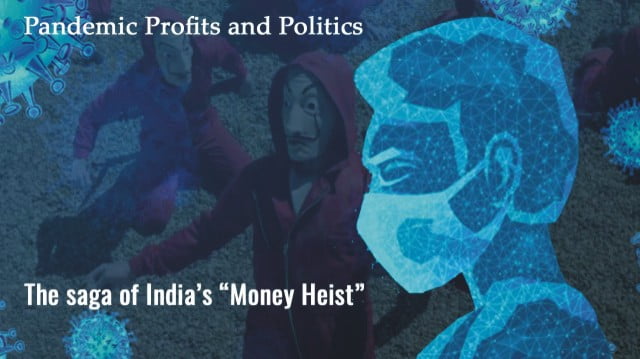 “La Casa De Papel” (Money Heist) is a Spanish heist crime drama television series created by Álex Pina. It is a blockbuster series on Netflix. The story is about a criminal mastermind who raided the Royal Mint of Spain.

If we go through the saga of vaccination, it is no less exciting. Possibly, it will make the author of “Money Heist” reimagine another blockbuster series. So here you are going to read the story, which is no less attractive. 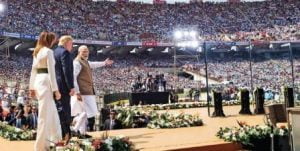 The story begins in Jan 2020, when Corona was first discovered in India. PM Modi had three priorities – Bihar Elections, Trump Visit, and a Regime Change in MP. We will investigate facts to see whether those three priorities were either by design or by chance, or by accident.

You can understand the answer on your own if you see the facts below:

The first reported case of the Pandemic in India was on January 27, 2020; a 20 yrs old female presented to the Emergency Department in General Hospital, Thrissur, Kerala, with a one-day history of dry cough sore throat.

PM Modi was busy campaigning in Bihar and praising littichokha, a traditional Bihari dish. However, he did tweet on March 3, 2020, telling people there was no need to Panic from pandemic.

Till the end of March 2020, the events like elections, the trump visit, and regime change were over.

On March 24, 2020, a dramatic lockdown was announced, which as per Modi, could break the chain of virus. Look at Fig 1 to validate his claim on how it was vice versa.

Fig 1: The progression of cases during the first wave

India lost two crucial months, but can we blame politics alone? Yes, a part of it was politics but let us find what else was going on.

India was testing the new cases at a plodding pace during March 2020. The pace was even slower by almost ten times than that of Pakistan in the last week of March 2020.

Testing and isolation are some of the most important steps in the prevention of any pandemic. India could test more than 10,000 per day in March 2020, but why was it testing almost five times less? Was it to allow it to spread?

During the same period, as per reports available in the public domain, a Gujarat-based company was producing test kits. The questions were raised by opposition on the proximity of this company with Modi. We don’t know what the truth is, but the data which we saw reveals that not only we reacted late, giving Corona an opportunity to spread, we also complemented it by not testing enough.

Later Huffington Post reported that the company involved had no prior track record in this area. It was also quoted in the public domain that the cost they quoted was even higher. The case remains a mystery we could not solve, but we know that the said same company subsequently was not on the approved list.

Another exciting development happened, which was no less attractive. ICMR ordered 500,000 test kits from China at a very high price. A dispute between the parties involved in the whole process exposed the massive escalation of cost.

The judgment was delivered to reconsider the price and indicating the massive profiteering. You can see the copy of the judgment here. Many news outlets reported this during that time which went unnoticed by mainstream media for the reasons best known.

Post this massive exposure, we also noticed that ICMR canceled the order. Whether it was because of the disclosure or because of ignorance, those remain unknown.

The most crucial point here to note is that we heard all the way ICMR is handling the Pandemic. It remains a mystery why NCDC (National Center for Disease Control) was not involved, which has one of the best scientists in the world today. NCDC is primarily responsible for controlling the spread of virus and ICMR is a research organisation. Why were they muted? Experts raised their doubts.

But did it end here? The answer is “No.” Vaccines will bring the climax. This story is becoming interesting from here.

In April 2020, the ICMR team involved in deep research on vaccines was asked to disband itself. It was reported that they were close to some breakthrough. In May 2020, they were asked to “collaborate” with Bharat Biotech and created a tie-up for vaccine development.

One of the topmost vaccine scientists, Gagandeep Kang, who was involved in vaccine research, quits following this though she denied it in media. Scroll later published a report raising doubt on the Ownership IP (intellectual property) of COVAXIN. Mainstream media largely ignored this.

The Government tried to launch COVAXIN on August 15, 2020. Why? They even wrote a letter to Bharat Biotech CEO. Was it to gain early market share or to grab the media attention for Modi? We don’t know the answer, but it may be both or none.

There are many things that happened in between, but the one that caught our attention is the delayed ordering of vaccines. It was reported widely in the media that the Government order vaccines started only in early 2021. 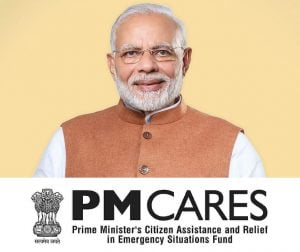 Many countries had booked their orders till then. Out of the initial orders, 66 Million (6.6 crores) vaccines were exported, a vast majority of it funded from the PM Cares fund.

There is no easy answer to explain why such complex transactions were initiated and what roles PM Cares play in procuring and supporting vaccines in other countries?

The matter became even more intriguing when the Government raised the price of vaccinations. Was it to make the vaccines producers super rich during the Pandemic?

Some experts may believe so, but the key question remains what Modi’s interests are? Possibly, we may not find the answer anytime soon now. But Supreme court has raised concern over this matter as per reports available in the media. 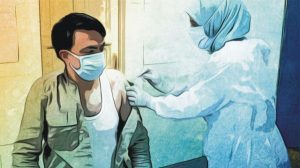 Meanwhile, concerns were raised in Brazil over an alleged scandal in procuring COVAXIN, where the president of Brazil, Bolsonaro was under scanner. Can we say no such thing happened in India? Again, probably we don’t have a concrete answer.

More concerns are being raised about how vaccines are available to private parties and scarcity in Government-sponsored vaccination camps. Central Government holds the responsibility for vaccine distributions. Many states have raised their concerns.

Meanwhile, the central Government was economical with truth related to vaccine availability as reported in Media.

NITI Ayog also indicated that Government is making unrealistic claims which are far from reality. The question remains why would Government or Modi like to mislead?

The vaccine saga can be more exciting, but we will not be able to do justice to our story if we missed how Modi used Donations.

On March 27, 2020, the Government registered a PM Cares under the Registration Act, 1908, with Trustees as Prime Minister, Defense Minister, Home Minister, and Finance Minister. Since then, several thousand cores of donations were received by this fund. 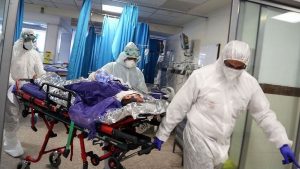 Some of the companies had intentions to develop ventilators at a much lower cost. If we take an average, the ventilators with such large order can be procured at less than INR 100,000 (against 400,000 offered under PM Cares)

During the same period, one of the whistleblowers working for a company that got an order claimed some wrongdoings. From the beginning, the way it was structured and progressed came into controversy.

Medical experts refused to accept the ventilators. See The Wire story “Behind Ahmedabad’s Ventilator Controversy, a Backstory of Connections to Top BJP Leaders. Besides this, some of the companies had no experience of making ventilators before.

While this was happening, some of the ventilators procured from the PM Cares fund exploded and caught fire in ICU. When India was gasping from breath during the 2nd phase of the Pandemic, several ventilators were either unused or not delivered.

Besides this, there were many which are faulty as well. Bombay HC, on hearing the plea on this subject, made a scathing remark on the quality of ventilators.

States identified the locations and informed the central government. The PIB information published on January 5, 2021, indicates that those hospitals have been identified, and CMSS which comes under the central ministry of health, has the responsibility for installation (see 4th and 2nd bullet).

Till April 2021, only 33 were built out of the 162 sanctioned. The hospitals complained the vendor who won the contract is untraceable. The plants take less than a month to build, and for almost several months, CMSS could not manage the delivery.

Subsequently, more allocations were done for setting up additional 551 oxygen plants. If we stitch the whole story, it will only indicate that vendors were too comfortable and CMSS was too complacent that they don’t have to manage anything.

The entire Saga of Testing, Vaccination, and Donations to complement a deadly cocktail of Pandemic, Profits, and Politics is very interesting and a fit case for a real-life blockbuster movie much of the tune of Money Heist.

At the core of the original “Money Heist” story, a teacher had ideas to stitch them together. But coincidences here are accidental.

Groping in the dark, government has been blundering its way through the pandemic