India Faces New Challenges: New Regime In US And Aggression Of China 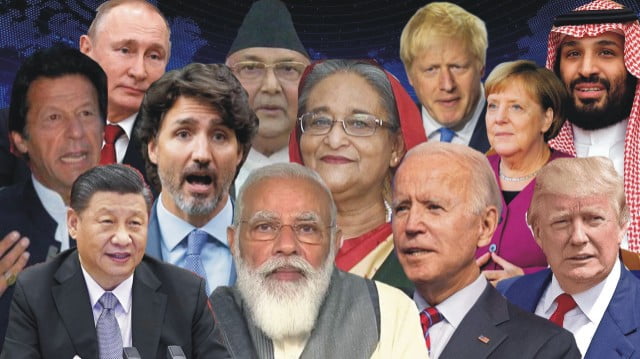 INDIA’S ‘Neighbourhood first policy’ needs to be given a fillip and execution at alarming speed in 2021 as its failure will encourage China to achieve an over ambitious and Aspiration goal to enhance its influence in the region hence an innovative approach may yield positive results thereby attaining a greater strategic confidence and trust amongst South Asian Countries.

While pondering over the preceding year when it battled Covid-19 fallout on the economy especially in view of the huge size of the country and Chinese aggression, India enters the new year with the challenge of strengthening ties and building new ones with the US, EU, Middle East countries, and its neighbors.

India Should Grab An Opportunity To Emerge As Global Player Instead Of Aspirational One.

The New Year presents India an opportunity to emerge as a global rather than an aspirational player which will depend upon the change in its policy to win confidence of neighbors being misguided and allured by China.

Analysts believe that New strategic approach will automatically help in achieving a greater bargaining power to deal with the new regime in the United States, European Union, the Muslim world, etc.

India’s rise is taking place in the shadow of aggressive and hostile China which is being deemed as even more theatrical, especially minimizing Covid19 impact on its economy and giving body blow to developed nations like the United States by hiding endemic related information to fulfill an ambition to become a world super power.

Foreign experts opine that China’s assertiveness has been viewed as a huge challenge for India because it opens up the likelihood of China dominating India’s immediate neighborhood.

By focusing a great deal of energy in the neighborhood, the Modi government must demonstrate that India has the capability to promote regional peace and economic integration which must be pushed with authority and commitment coupled with a killing spirit vis -a- vis China.

Experts believe that Donald Trump whimsically and in a fit on being ignorant, vacated the space for China during his four-year stint as US administration walked out of a dozen multilateral bodies or agreements including Iran nuclear deal, Climate change world initiative, World Health Organization projects etc.

On the contrary, Beijing moved in to claim this space though in view of India’s interest, Trump stood by our country and kept away from domestic issue whereas he vociferously targeted China and the Communist Party of China for disrupting the global order.

Trump Era Impact On Ensuing Policies Of US

Experts also feel that now with Joe Biden as President US is expected to reclaim the space vacated by Trump. But, former Foreign Secretary, Vijay Gokhale has expressed a different opinion when he said that the US will be defined by “Trump Americans” and Going forward whereas America will not be defined by the Democrats or by the Republicans.

India needs to woo Europe and keep watch on UK and EU deal ahead of negotiating with the United Kingdom and there is a possibility of an India-EU summit in May,2021.

France and Germany have come up with their Indo-Pacific strategy but an EU-China trade deal would be dismembered by Indian negotiators to project our economic interests. India will have to check the growing economic footprint in its neighborhood as China has exploited the begging bowl policy of Pakistan which increases the chances of using this rogue nation against India.

High Expectations From Biden And Relevance Of Us-China Trade Deal.

India is having high hopes from Biden in the new year who has stressed the need of having strong ties with India to checkmate China besides taking further economic ties between two countries which will depend on how the US views China in the larger scheme of things?

India will closely watch the implications of Us-China trade deal and one of the key tests will be the future of QUAD, comprising Japan, India, Australia and the United States and the Indo-Pacific strategy of the new US administration.

New Delhi should build on its deepening strategic and defence ties with the US and may opt for resolving trade and visa issues.

Dealing With Neighbourhood And Nations Like Pakistan, Nepal Etc Having Very High Influence Of China

It is an established fact that India faces a huge problem created by Pakistan by sponsoring terrorism in Jammu and Kashmir which is encouraged by China. India had dealt strongly when surgical strikes took place but several ceasefire violations continue unabated and dialogue could be an answer though it cannot be one-sided affair.

China becomes the biggest lender to Pakistan after surpassing Japan. Pakistan owes $19 billion (1/5 of its total debt) to China. The CPEC loans will add $14 billion to Pakistan’s total public debt, raising it to $90 billion, abating Pakistan’s economic ability to service a huge amount of debt. Piling up loans from China is a big gamble for Pakistan’s economy hence an improvement of ties seems to be a remote possibility.

But Nepal is a new headache for India in 2021 though the departure of PM, Oli may open up new vistas of relations in the future. Modi government has already taken an initiative and sent foreign secretary as well as army chief last year to hold negotiations with the Oli government which is in limbo and India will have to revive talks with the new regime after polls which, hopefully, may not be stooge of China.

Priority To Improve Ties With Other Neighbours

Bangladesh started asserting itself on CAA-NRC issues which were internal affairs of India. Bangladesh pushed back and India did not notify the CAA rules. India also watched closely the US and Chinese incursions with the Maldives and Sri Lanka. India appears to have made peace with the involvement of the US in the Maldives and also associating itself with Japan which has got stakes in Sri Lanka and the Maldives hence efforts should continue unabated.

Friendship of Saudi Arabia, Israel, UAE, etc., does help in OIC to ward off Pakistan’s mischievous attempt to attract world attention which needs to be strengthened. As chairperson of OIC, Saudi Arabia is protecting the interests of India especially when Pakistan has offended it. UAE-ISRAEL agreement will prove a welcome development as it will bring one block closer to India which is likely to make efforts to cement the ties with Muslim world.

Tackling RCEP Issue Which May Be Exploited By China

India has strong ties with Russia, and Moscow was the venue for all the India-China official and ministerial conversations over the border standoff. But it has taken note of Moscow’s position on the Quad and Indo-Pacific, a near-echo of Beijing’s stance. India’s public articulation of “self-reliance” and refusal to sign trade pacts with Regional Comprehensive Economic Partnership (RCEP) countries was widely perceived as “isolationist” and “inward-looking”. Hence there is a dire need of looking at it in the new year to find via media of the big decision to avert fallout on the economy besides checking the pre-eminence of China.

India did step up to supply medicines and protective kits to more than 150 countries in 2020 and the current situation warrants to attain a prominent position after supplying the vaccines to needy countries especially when manufacturing faculties are of top world level in our country. The humanitarian gesture will be appreciated by needy nations as it will lead to saving the lives of millions of people.

Entry As Non-Permanent Member Of Security Council In 2021

Experts opine that as India enters the UN Security Council as a non-permanent member for the eighth time, stakes are high in the wake of this leadership contest between China and the rest of the world. India will have to take positions on issues it had carefully avoided — from Tibet to Taiwan, from Iran-Saudi rivalry to the refugee crisis between Bangladesh and Myanmar. While cross-border terrorism is one of the top concerns and India will work towards isolating Pakistan further, a limited fixation on the western neighbor would distract from India’s aspirations of being a global leader.

Regarding future ties with Iran, the Biden administration may adhere to the basic attitude toward US-Iran relations that existed in the Obama regime. Biden even publicly stated that he still holds previous perspectives on the Iran nuclear deal – and if Tehran returns to “strict compliance with the nuclear deal,” Washington will rejoin the plan. However, Tehran says it will negotiate only if Washington lifts sanctions.

Due to the pressure created by the Trump administration, India had stopped importing oil from Iran after the US refused to extend the exemption from sanctions in April 2019. India had dropped its dependency on Iranian oil from about 2.5 billion tons a month to 1 million tons a month.

Now India needs to take a firm stand and contribute to the easing out of ties between the US and Iran which will have a lot of strategic importance to us. Iran is a trusted friend who has stood against the mischievous moves of Pakistan in the past.

FINALLY, it will be mandatory for all nations to give top priority to revive battered economy but India has got another impossible task to normalize the relations with neighboring countries, though pessimism may overtake especially when it comes to Pakistan controlled by the army which would favour status quo and tension to ensure its relevance but efforts must continue through every possible means.

PrevPreviousSubhas Chandra Bose: What is a correct, rational, assessment?
NextRepublic Day: What is there to celebrate about?Next
Author Related Post
Related Post