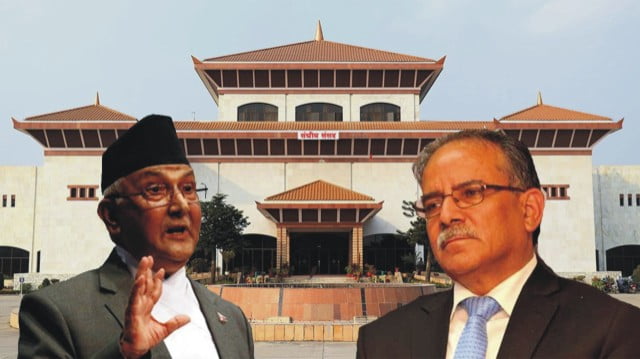 AN UPHEAVAL in political environment in Nepal forced Prime Minister KPS Oli to dissolve the Parliament two years ahead of its time.

This not-so-sudden development in Nepal politics, with his own colleagues calling for his ouster – 33 out of 44 members of the Supreme Body and Standing Committee of Communist Party of Nepal sought his resignation – also dealt a body blow to the designs of the Chinese Communists Party that was guiding Nepal’s regime.

The dramatic developments in Nepalese politics is being seen as a big blow to the Chinese interests, as the Communist regime of that country was interfering in the internal affairs of Nepal and disrupting its relations with other countries, notably India.

Oli, it is widely believed in Nepalese official and diplomatic circles, was guided, and ‘protected’ by the Chinese through its Ambassador, Hou Ynqui.

Now India can heave a sigh of relief, as the person who was needling India through official claims of Indian territories through a bill in Nepalese Parliament is now out of action.

Oli had also raised serious objections to the Indian efforts to construct road to Kailash Mansarovar.

Incidentally, a few weeks back two factions of the Community Party of Nepal (CPN) led by Oli and Executive Chairman and former Prime Minister Pushpa Kamal Dahal alias Prachanda had traded charges and counter charges against each other raising the political temperature in the world’s only Hindu nation. A split in the community party in future cannot be ruled out.

PM Oli had survived earlier onslaught of majority of his party colleagues due to the blatant interference of Chinese envoy Hou Ynqui. In fact, Oli had also blamed the Indian Embassy in Nepal for inspiring a coup against him and pointed fingers at senior leaders of his own party.

Now, India is watching the developments from a distance, and the Nepal leader can hardly accuse anyone else but himself for his political woes.

But Chinese efforts failed to sustain a weakened Oli as Prachanda stepped up his moves to unseat him. He came out with a 16-page document indicting Oli, listing out all his failures in governance, details of his corruption scandals and how he destroyed the party. His demand : immediate resignation of Oli.

Prachanda was s ole leader behind the people movement against Rana rulers from 1996 to 2006 that brought communists to power. Prachanda’s movement had a high cost as 13,000 activists lost their lives. Later, Oli merged his faction with the mainstream party.

It was Oli who violated the principles of hierarchy in the NCP sparking of problems in the party. Prachanda strived to unite the party but Oli refused to abide by this agreement and insisted on his superior status within the party apparatus.

Prachanda is of the view that the party should control the government while Oli dismissed this thought maintaining that in a democracy, a party cannot dictate to the government.

CPN Suffers Due To Open Feud

Analysts opine that the core issue of open confrontation between two groups relates to the leadership issue of the CPN. It may be recalled that during the merger of the two parties in 2018, there was a gentleman agreement between Oli and Prachanda to lead the party and government, with both leaders on an equal footing.

Later, the duo accepted party decision to allow Oli to run the government for five years and Dahal to run party till next general convention.

Incidentally, it is the Chinese interference and Oli’s dependence on a foreign power that led to a revolt against him, and his position had become almost untenable. Soon, he may have to rethink his position in the party and leave, analysts opine.

Turmoil In Party Pulls Down Oli

Experts say that the situation had gone out of hand as Oli has come out with 32 page document which targets Prachanda and diminishes chance of reconciliation which may mean end of his rule. He is in a hopeless minority in parliament.

Oli is hitting back with all he has, lacing his attacks with personal allegations of coercion, threats, pressure, violence, corruption, and this will lead them to a point of no return.

Foreign secretary held dialogue at different levels and Nepal government had expressed satisfaction over the exchange of ideas to narrow down the different between nations.

But experts believe that in view of recent fluid political situation, India will have to wait as PM Oli and his rival Prachanda battle it out and wait for the political fallout in Nepal.

Though Nepal Prime Minister might argue that visit of China’s Defence Minister has got nothing to do with crisis in his country, it does appear to be the last-ditch effort of the Dragon to save its loyal friend.

Chinese Defence Minister assured Oli of protection of the sovereignty of Nepal. Anti Oli critics alleged that Chinese ambassador to Nepal is working like an extension of PMO of Nepal and lobbying day and night to save communist government.

According to Nepal media reports, Oli was so desperate to cling to power that he went to the extent of seeking emergency help form arch political rival, Nepali Congress. The opposition party, which was waiting in wings to witness the downfall of communist government under its own weight, rejected the offer.

Nepali Congress has been standing with India whenever it was in power hence relations got strengthened but had drifted away during past few years.

Finally, India should wait for the controversy of dissolution of parliament to settle and if general elections are held, it should stay neutral and await the outcome. As per logic and foreign policy norms, India should deal with the political party whichever comes to power.

PrevPreviousMay the Tradition of Langars Grow — Loh Langar Tapde Rehan!
NextFarmers and Agriculture: The Case of a Culture on Verge of ExtinctionNext
Author Related Post

Nepal: Supreme Court Comes To The Rescue Of Democracy....

India’s ties with Myanmar may remain unaffected as it take....

India Faces New Challenges: New Regime In US And Aggression ....

Congress: The Purge And Sidelining Of Dissenters By High Com....

Nadda Toughens His Stand Against Infighting....

Nepal: Supreme Court Comes To The Rescue Of Democracy....

India’s ties with Myanmar may remain unaffected as it take....

India Faces New Challenges: New Regime In US And Aggression ....

Nepal PM Oli’s departure from office may act as a saviour ....