Nepal: Supreme Court Comes To The Rescue Of Democracy

It is being interpreted as a big setback to China 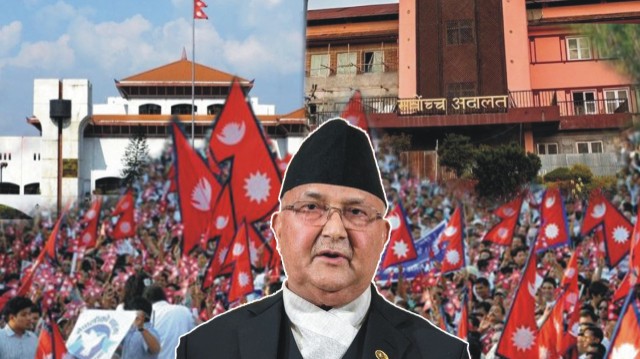 Nepalese judiciary did democracy proud when its Apex court stepped in to reverse illegality indulged in by Prime Minister K Prasad Oli.

Restoring the House of Representatives that was unconstitutionally dissolved by the Prime Minister to cling onto power, after having lost popular support, the Supreme Court reinstated the lower house much like late King Gyanendra did on April 25, 2006.

In a landmark ruling, a five-member Constitutional bench led by Chief Justice Cholendra Shumsher declared as null and void as well as “unconstitutional” the Oli government’s decision to dissolve the 275-member lower house of the Parliament. The court ordered government to summon the House session within the next 13 days.

Nepal had plunged into a political crisis on December 20 after President, Bidya Devi Bhandari dissolved the House and announced fresh elections between April 30 and May 10 even as a big tussle for power broke out in the ruling Nepal Communist Party (NCP).

A dominant Faction of ruling communist party Nepal (CPN) headed by former prime minister, Pushap Kumar Dahal, ‘Prachanda’ had hit out against the Caretaker Prime Minister, KP Sharma Oli, who was removed from the primary membership of the organization. This was being seen as a big jolt to China and a welcome relief for India.

The rival faction leaders of the Nepal Communist Party had threatened to expel Oli from the party as they took to the streets for the second time in less than a month to protest against his decision to dissolve the Parliament on December,2020.

Prachanda group was demanding the fresh elections in April and May this year in the backdrop of the political unrest in the country.

Confrontation with the supreme body of the party to cling onto power led to the decision to dissolve the lower house, plunging the government and the nation into a chaos when it was facing the Covid-19 pandemic.

Prachanda led dominant group in CPN enjoys the maximum support of the MPs in parliament and also within the supreme body which is why Oli is in a minority, and dissolved the house. It led to a split in CPN with Prachanda electing former PM Madhav Kumar Nepal as the chairman and insisted it was the real, legitimate CPN.

A five-member Constitutional Bench of the court led by Chief Justice Cholendra Sumsher Rana sought the original copy of the documents that led to the dissolution of the house.

Article 85 states that term of the House shall be of five years ‘unless dissolved earlier pursuant to this Constitution’. Article 76(7) is the only provision under the Constitution that envisaged a dissolution of the House. Under Article 76, the president has to exhaust all efforts to form the government, either by the leader of the party commanding majority.

Constitutional specialists, legal experts, scholars etc in Kathmandu opine that President Bidya Bhandari did not exhaust all the options and dissolved the house, which is illegal.

The ball was in the Apex court, where 13 petitions were filed challenging the decision, which also questioned the legality of the call for fresh elections slated for December 2022.

After 30 years of the Panchayat regime, democracy was restored in 1990 after great struggle by democratic forces. An election was held the next year, in which the Nepali Congress emerged as the largest party. But due to an intra-party rift, then prime minister Girija Prasad Koirala dissolved parliament in 1994.

The Supreme Court endorsed his decision on the ground that as a PM who enjoys a majority in parliament, he can go for a fresh mandate.

Again in 1995, then prime minister Manmohan Adhikari who faced a no-confidence motion dissolved parliament. But this time, the SC rejected his move with a view that there was still the possibility of forming an alternate government.

Oli’s Illogical Action To Dissolve Parliament Has Split The Party

An upheaval in the political environment in Nepal forced Prime Minister KPS Oli to dissolve the Parliament two years ahead of its time. This not-so-sudden development in Nepal politics, with his own colleagues calling for his ouster – 33 out of 44 members of the Supreme Body and Standing Committee of Communist Party of Nepal sought his resignation – also dealt a body blow to the designs of the Chinese Communists Party that was guiding Nepal’s regime.

The dramatic developments in Nepalese politics is being seen as a big blow to the Chinese interests, as the Communist regime of that country was interfering in the internal affairs of Nepal and disrupting its relations with other countries, notably India.

Oli, it is widely believed in Nepalese official and diplomatic circles, was guided, and ‘protected’ by the Chinese through its Ambassador, Hou Ynqui. Now Indian can heave a sigh of relief, as the person who was needling India through official claims of Indian territories through a bill in Nepalese Parliament is now out of action.

The Maoists have seized control of much of Nepal‘s countryside in a 10-year anti-monarchist insurgency that has killed about 13,000 people. Prachanda led the movement but Oli did not honour the agreement to keep himself away from organisaiton and focus on government. Oli tried to undermine Prachanda’s authority which was root cause of confrontation leading to fall of the government.

In May 1991, Nepal held its first parliamentary elections. In February 1996, the Maoist parties declared People’s War against monarchy and the elected government.

Parliamentary democracy was introduced in 1951 but was twice suspended by Nepalese monarchs, in 1960 and 2005. The Nepalese Civil War in the 1990s and early 2000s resulted in the establishment of a secular republic in 2008, ending the world’s last Hindu monarchy.

Over Ambitiousness Cost Oli Dear As He Ignored Constitutional Aspect

But Chinese efforts failed to sustain a weakened Oli as Prachanda stepped up his moves to unseat him. He came out with a 16-page document indicting Oli, listing out all his failures in governance, details of his corruption scandals and how he destroyed the party. His demand: immediate resignation of Oli.

Prachanda was the sole leader behind the people movement against Rana rulers from 1996 to 2006 that brought communists to power. Prachanda’s movement had a high cost as 13,000 activists lost their lives. Later, Oli merged his faction with the mainstream party.It was Oli who violated the principles of hierarchy in the NCP sparking problems in the party.

Though Nepal PM might argue that visit of China’s defence minister has got nothing to do with the crisis in his country, it does appear to be the last-ditch effort of the Dragon to save its loyal friend.

Chinese defence minister assured Oli of protection of the sovereignty of Nepal. Anti Oli critics alleged that Chinese ambassador to Nepal is working like an extension of the PMO of Nepal and lobbying day and night to save communist government.

According to Nepal media reports, Oli was so desperate to cling to power that he went to the extent of seeking emergency help from arch political rival, Nepali Congress. The opposition party, which was waiting in wings to witness the downfall of communist government under its own weight, rejected the offer.

IT IS a paradox that despite open interference of Chinese ambassador in Nepali politics to save political eclipsing of PM Oli, foreign minister, Pradeep Gawali gave an impression that his country will never allow external meddling in its politics as its leadership is capable of handling problems.

Gawali unsuccessfully tried to clear the suspicion of India about China’s role in the political turmoil in the neighbouring country. He tried to sell the idea that Nepal’s relations with both neighbours are excellent and it never compares its relations with each other.

Nepali media was full of reports about outcome of Gawali’s recent visit to India as it  has raised the issue of failure of foreign minister to seek an appointment with Indian PM, Narender Modi who might have avoided due to fluid political situation in Himalayan Kingdom which may go to polls in few months provided supreme court does not revive the parliament dissolved by Oli.

It is a fact that PM  does not enjoy majority of MPs after his expulsion by Majority leader of communists party , Prachanda. Gawali’s visit, however, succeeded in getting nod for supply of Covid Vaccine to Nepal by India and process has already started to help the victims which will be appreciated by common people in that country.

KEEPING in view norms of diplomacy, India must keep on having dialogue with Nepal which is so essential to keep it out of lap of China especially in view of the expansionist policy adopted by Dragon. As per available evidence, China has been inciting communist  government led by Oli against India to serve its nefarious design but revolt and ouster of Oli has come as a welcome relief to India which gives a chance to normalize ties with Nepal.