High Court: Lines between right to dissent & perceived terrorist activity getting blurred; "If this mindset gains traction, it would be a sad day for democracy." 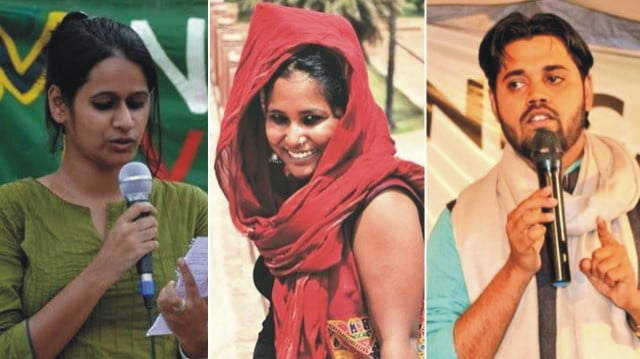 NEW DELHI: Faced with the entire might of the ruling regime, imbroiled in blatantly politically and ideologically motivated court cases, and deprived of their basic human rights, Devangana Kalita, Natasha Narwal and Asif Iqbal Tanha will finally walk free.

The Delhi High Court today (Tuesday) granted bail to the two Pinjra Tod women activists and the Jamia Milia student in a case in which they were accused of being part of a conspiracy to foment communal riots in India’s national capital.

The three were charged under the stringent provisions of the Unlawful Activities (Prevention) Act.

“We are constrained to express, that it seems, that in its anxiety to suppress dissent, in the mind of the State, the line between the constitutionally guaranteed right to protest and terrorist activity seems to be getting somewhat blurred. If this mindset gains traction, it would be a sad day for democracy,” said the bench of Justices Siddharth Mridul and Anup Jairam Bhambhani while granting bail.

The bench directed that a copy of the order be supplied to the counsels of the accused persons expeditiously. The court has granted bail to the three accused subject to furnishing Rs 50,000 personal bonds with two local sureties each.

“We have allowed all three appeals. We have set aside all three impugned orders [of the trial court]. We have admitted all three appellants [Ms. Kalita, Ms. Narwal and Mr. Tanha] to regular bail,” the bench said.

With the latest development, Devangana, who is facing trial in four cases, and Natasha, who faces three cases, have now been granted bail in all. Their counsel, Adit Pujari said they will be released from jail any time now.

Natasha Narwal’s father died last month without being able to see her daughter because she was repeatedly refused bail and his wish to meet her was also denied. His death had triggered a strong wave of protest among civil liberties activists.

The three were asked to reside in their respective place of records and inform the authorities if there was any change in residence.

A trial court had on October 26, 2020 dismissed Tanha’s bail plea saying his active role in the entire conspiracy seemed to be prima facie a truth. Similarly, a trial court in January this year had dismissed the two women’s regular bail pleas on similar grounds.

The Delhi Police opposed Tanha’s regular bail, claiming that he was part of a premeditated conspiracy to wage riots. Tanha’s lawyers tried to prove that he was not even present in the city at the time and did not visit any of the protest sites where rioting and violence happened.

Natasha Narwal and Kalita were arrested on May 23, 2020 in connection with an FIR about a sit-in protest at Jafrabad Metro Station against the Citizenship (Amendment) Act.

Police also registered an FIR against the two women in connection with the Delhi riots under sections that also included Sec 307 (attempt to murder) and Sec 302 (murder).