We need music with our news. 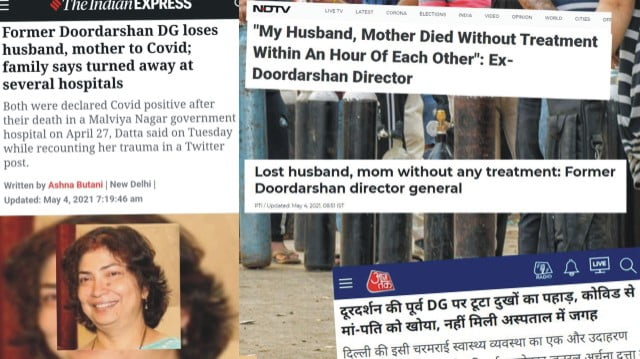 What’s happening outside, and deep within us, is suitable music.

Senior journalist, television anchor & columnist, SP Singh, today commented upon a news story in the media, as he occasionally does, sharing his observations via WhatsApp with a small group of his friends and acquaintances. We, at Punjab Today, felt that SP Singh’s observation was worth sharing with our readers, and have prevailed upon him to allow us to publish the same.

We leave it to our readers to do the soul searching on their own about the state of our news media, and how packaging and airbrushing of news stories has left us bereft of our capacities to resonate with the human soul. Have no doubt – we all figure in this SP Singh tale.

YOU don’t need pathos. The big words to describe what happens to a human being deep within are not required. You do not need to add some mourning tune in the background. Just the bare facts are enough to leave you numb.

Archana’s husband had symptoms that worsened in a span of 48 hours. They couldn’t find an ambulance. He was rushed to Max Saket. Both Covid and non-Covid wings turned them away. They went to PSRI, one of Delhi’s top multispeciality hospitals.

Midway, they stopped at Madhukar Rainbow Children’s Hospital, too. The oxygen levels were 40 and dipping. By the time they reached Pt Madan Mohan Malviya Hospital in the afternoon, it was too late. He was declared dead on arrival.

Later that day, the mother of the deceased husband, Archana’s mom-in-law, fell sick. They couldn’t find an ambulance. She was rushed to National Heart Institute since she was a heart patient and had been treated there. They failed to admit her there. Oxygen levels around 50. Rushed around, ended up at Pt Madan Mohan Malviya Hospital where they had lost a family member a few hours ago. She, too, was declared dead on arrival.

Now, Archana herself, her young son Abhishek, her daughter and her sister also have Covid, monitoring their health at home. Archana’s niece is low on oxygen. Her son is running around for oxygen cylinders.

One little factoid: Archana Datta is a former Director General of Doordarshan, also oversaw All India Radio and was Press Secretary to the President of India. 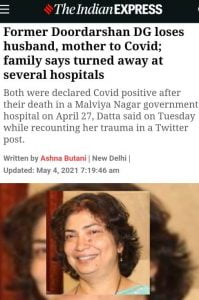 You will have to add the pathos, big words, emotions and that background music you have become so used to watching all that television news, on your own. The drama of a family losing a member, then not giving you even a couple of hours before you lose another, and with the death still lurking around the corners of your house and outside in the street, and the hospitals shuttering themselves up lest the sick come to them – you’ll have to fill in all of that on your own.

It’s a tough task, but others are busy – dying. So, you’re on your own, possibly watching the news – with background sad mourning music duly thrown in. TV studio में कोई तो दूसरे को आवाज़ मारता होगा — यार, उस की मम्मी भी मर गई है, थोड़ा और sad वाला music लगा दें? After all, that music doesn’t automatically come and fits itself in there! There are people working on that craft of presentation of death. Mere dying in droves is not enough. We need pathos, and those big words.

Someday, a generation will come along and study this phenomenon. I only pray that it does not write research papers about what were we doing, that it only takes out the time to go sit outside on the sidewalk and cry.

* * *
I still remember that when an army school was attacked in Peshawar in 2014 and some 134 children had been killed by Taliban terrorists, one of the very worthy progressive editors in a top media house spent half a day trying to first find ‘just the right’ music for background score to a ‘feature-ish’ story the channel had churned out by that very night, and then hours were wasted to confirm copyright issue.

Meanwhile, he was regaling his staff with his knowledge of Verdi’s ‘Il Trovatore’, of how the gypsy’s daughter abducts the baby and throws it into the fire and how the gypsies sing something called ‘Anvil Chorus,’ striking their anvils at dawn. A friend of mine working at the time in that studio had told him in a roomful of young things that he has wasted precious hours to find ‘suitable music’ to underline the sense of mourning, and that ‘death of a child is suitable enough factoid to induce that sense.’

The editor was angry, relationship got soured, my friend left the organisation, and eventually, one day, the editor, too, was unceremoniously eased out. These days he is a key face on a national channel that tells me how is my ‘country today.’

A few days back, I heard on that channel that very same tune from Verdi’s opera, filling up the background as pyres burnt in the backdrop. It brought back the memory of that 2014 day, narrated by my friend, when we were heartbroken by the news of scores of young kids shot to death by religious bigots. I can still close my eyes and envision that erudite editor waxing eloquent about the power of Verdi’s expressive music.

Years after she had left the organisation, I had asked my friend why exactly did she fell out with the seemingly progressive editor with such impeccable taste as his family background and books reflect. “Because of my last conversation in his cabin,” she said.

Let me quote from her letter of resignation – “If you can open your mouth wider, I’ll probably see those dracula teeth, too, but then I’ll need the right music to go with them and we might not have the copyright and it could be a problem. So, will you accept this letter as my resignation or need I come and throw a kid into fire to create some effect? I know I can always depend upon you for the appropriate music.”

What’s happening outside, and deep within us, is suitable music. We had become tone deaf to the cries of the unwashed and now these are providing the music to our lives. It is called fear of death, if you are lucky, and death, if that copyright issue is resolved. Happy listening!