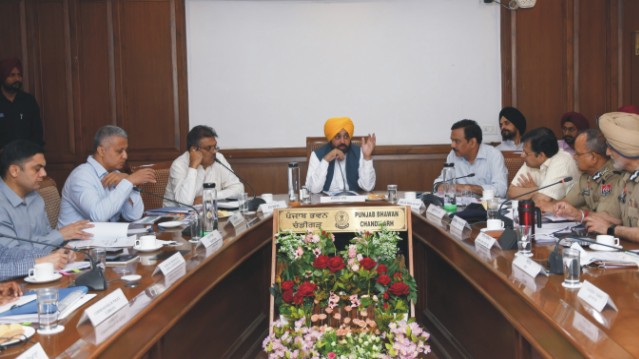 Condemning the trend of gun culture and gangsterism being promoted by the Punjabi singers in the larger public interest, Bhagwant Mann urged them to desist from fanning violence, hatred and animosity in the society through their songs.

Chandigarh, May 12: In a bid to combat the menace of drugs, the Punjab Chief Minister Bhagwant Mann on Thursday directed the SSPs/CPs to act in tandem with STF to launch joint operations to nab the big sharks running drug mafia.

Addressing a high-level meeting of DCs and SSPs here at Punjab Bhawan this morning, the Chief Minister categorically said that in case any incident of drug supply comes to his notice from any part of the state, then the concerned SSP/CP would be held solely accountable. The Chief Minister also asked the police officers to immediately swing into action in case someone lodges any complaint about drug trafficking. He said no laxity would be tolerated for eradication of drug at any cost as its supply chain would have to be broken to save our youth who had fallen prey to drugs.

Emphasising the need to tightening the noose around the drug smugglers across the state, the Chief Minister said that strict action would be taken in case of default bail due to non-presentation of challan in the stipulated mandatory period, particularly in cases of commercial recovery.

Showing zero tolerance for those who are in hand in glove with the drug peddlers, the Chief Minister underlined the need to evolve an effective mechanism to punish the erring police officials who were giving patronage to the drug peddlers.

The Chief Minister also directed the DGP to issue detailed guidelines to all the SSPs not to disclose the price of drugs seized during recovery in the international market as this practice attracts the innocent people to make quick buck. He, however, said that rest of the information regarding quantity seized, location of recovery and the details of accused could be made public.

Underscoring the need, Bhagwant Mann asked the Health and Police departments to work in close coordination with a focus to adopt reformist approach towards petty offenders. He stated that OOAT clinics are being increased from existing 208 to 500 immediately to facilitate the drug addicts to get easy access for treatment within a radius of 5-6 km from their residence. He also emphasized the need to set up the peer support network, which would be instrumental to prevail upon the drug addicts to refrain from drugs through their own life experience about quitting drugs.

He also asked the DGP to strengthen the investigation mechanism also so that an exemplary punishment could be handed down to the guilty involved in drug mafia at the earliest. He said this step would go a long way as deterrent for others to desist from selling drugs in future. The Chief Minister also asked the DGP to speed up the process for confiscation of properties belonging to those involved in drug mafia. Showing concern over tardy pace in this regard, Bhagwant Mann asked the DGP to personally monitor the progress of confiscated properties every month and keep him updated accordingly.

As preventive measures, Bhagwant Mann stressed the need for regular joint visits conducted by DCs/SSPs besides SDMs and DSPs within their jurisdiction especially the hotspot villages. Similarly, special focus should be laid on revamping sports infrastructure in villages and wards besides intensifying efforts to hold sports meets, tournaments and youth festivals in order to channelize the unbounded energy of youth into constructive manner thus keeping them away from drugs. Drug free villages should be declared in every district to instill the confidence of people.

Condemning the trend of gun culture and gangsterism being promoted by the Punjabi singers in the larger public interest, Bhagwant Mann urged them to desist from fanning violence, hatred and animosity in the society through their songs. He called upon them to follow the ethos of Punjab, Punjabi and Punjabiyat thereby strengthening the bonds of brotherhood, peace and harmony instead of fuelling anti social activities through such songs.

Bhagwant Mann asked these singers to be far more responsible thus playing a constructive role in promoting the rich cultural legacy of Punjab for which it is known world over. He said, “It is our prime duty to prevail upon such singers not to encourage violence through their songs which often pervert the youth especially the children with impressionable minds. Initially, we request them not to prop up such trend failing the government would be forced to act sternly against them.”

Later, the Chief Minister also asked the Deputy Commissioners to launch a vigorous awareness and motivation campaign to promote the Direct Seeding of Rice (DSR) technology in order to save fast depleting ground water table besides encouraging farmers to sow summer moongi and basmati thus giving impetus to crop diversification.

Sharing his government’s latest initiative to ensure hassle free and transparent governance to the people across the state, Bhagwant Mann said that a dedicated office would be soon set up in every assembly constituency as an extension of Chief Minister’s Office to expedite those works of people requiring immediate inter-departmental intervention. This programme ‘Tuhadi Sarkar Tuhade Dwar’ would help the people in getting their several vexed issues resolved promptly to their satisfaction.

PrevPreviousSedition Ruling: At last, SC offers a ray of hope against misuse of the law
Author Related Post
Related Post