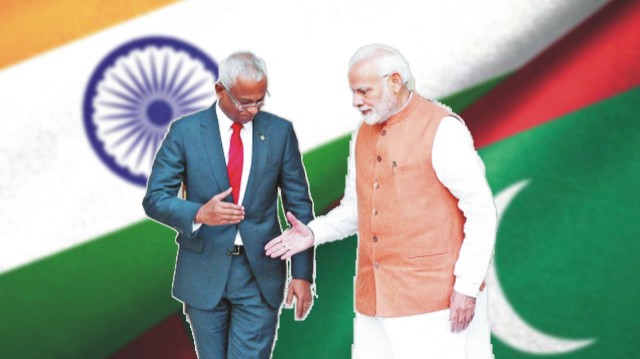 Once cordial relations between the two sea neighbouring countries, India and Maldives, have soured during the last three years, but the mature handling by both governments may result in restoring the ties back to normal.

A lot has happened in the bilateral relations between India and Maldives during the last ten years. The relations which were once described as one of the most vibrant and dynamic, have turned into one in which India has been painted as a villain. Though the genesis started ten years back, yet it gathered further momentum during the last three years particularly, resulting in ‘India Out’ campaign on the social media.

The movement got a boost when the Maldives Supreme Court overruled former president Yameen’s conviction in a money-laundering and embezzlement case in November 2021. The development allowed him to make a return to politics.

Ties between India and the Maldives had hit a low during the tenure of Yameen, who was considered to be pro-China rather than pro-India. Yameen’s half-brother, former president and currently Maldives Reform Movement party leader (MRM) Mamoon Abdul Ghayum, is among those who have opposed the campaign, even in 2013 when Yameen became the president.

India-Maldives bilateral relations deteriorated during the Peoples Party of Maldives’ (PPM) five-year rule beginning in 2013, then led by Abdulla Yameen and the anti-India sentiment was apparent even back then, observers say.

Other political parties in the Maldives too have opposed the anti-India campaign, saying the former president is irresponsibly inciting hatred among the people towards India.

The PPM brushing aside the charges against it, in its defence says that the current Solih government has opted at times to keep the relationship, particularly that under the defence sector under wraps from where the criticism basically stems from.

The Jumhooree Party, another coalition partner of the Solih government, also said in a statement that it doesn’t support any activities, which compromise the independence and sovereignty of the Maldives, and the Jumhooree Party does not believe that there is any legal ground to decide the existence of any Indian military presence in the country.

There are specific issues, which have fuelled the anti-India sentiments and rhetoric on the social media during the last three years. The first is the long-standing controversy over the two Advanced Light Helicopters (ALF) that were given by India to the Maldives in 2010 and in 2015, both of which were used for ocean search-and-rescue operations, maritime weather surveillance and for airlifting patients between islands.

These helicopters were meant to be deployed for humanitarian purposes only, but some in the anti-India constituency, particularly Yameen’s party PPM, tried to portray that by gifting these helicopters, India was creating military presence in the country because they were military choppers.

Secondly, the two countries signed bilateral agreements according to which Indian officers were to train the Maldives National Defence Force, under whose command these helicopters operate.

Thirdly, after the Solih government came to power, in 2019, local Maldivian media speculated that the UTF Harbour Project agreement signed between India and the Maldives in 2016, during the Yameen government, would be turned into an Indian naval base. Under the project India was to develop and maintain a coastguard harbour and dockyard at Uthuru Thilafalhu, a strategically located atoll near the capital Malé, and develop road connectivity to Male and decongest the Male harbour.

Back then, Maldivian chief of defence forces, Major-General Abdulla Shamaal had said that while the Indian government had indicated that it would provide grant assistance for this project, there were no plans of any Indian naval base in the country. Fourthly, in 2016, an Action Plan between India and the Maldives was signed for ‘defence cooperation’ to enhance “shared strategic and security interests of the two countries in the Indian Ocean region”.

In 2016 when anti-India sentiments were at their peak and the bilateral relations were at their worst against the perceived military presence of Indian forces in Maldives, the Yameen government had asked India to take back these helicopters and refused to extend the term of the agreement that would extend their stay and use in the country.

Observers say that one of the main reasons behind the ‘India Out’ campaign was rooted in this controversy surrounding the ALF choppers and India’s reported refusal to take them back.

During the Yameen-era, India had looked on in concern as the Maldives began to develop stronger ties with China and its Belt and Road Initiative.

By 2018 when Ibrahim Mohamed Solih assumed office, he immediately renegotiated these agreements, extending the stay and use of these choppers in the country. The Solih government’s visibly warm relations with India have only served to fuel anti-India sentiment in the country.

However, among the many grievances in social media posts by prominent members of ‘India Out’ campaign, a recurring complaint is the lack of transparency in agreements being signed between the Solih government and India.

It is a fact that that much of the criticism levelled by the Maldivian opposition and the ‘India Out’ campaign wouldn’t have arisen had these bilateral agreements been publicly discussed in the Maldivian Parliament. But the ruling government and the defence ministry describing these agreements as confidential has led to agitation in political circles that percolated down to ordinary Maldivian nationals and has taken the form of a wave of criticism, inflammatory rhetoric and unverified allegations, especially on social media platforms.

Fundamentally, the issue is not so complex though it involves bilateral relations, geopolitical and economic interests for both countries. However, both the governments have acted in a mature manner in this regard. Both of them are aware of the increasing defence importance of Maldives in the Indian Ocean, due to the increased US interest in the Indo-Pacific and Maldives’ strategic position. In addition to the Maldivian need to have India on its side to guard its defence and commercial interests.