Farm Laws and Farmers’ Concerns: What is the way out? 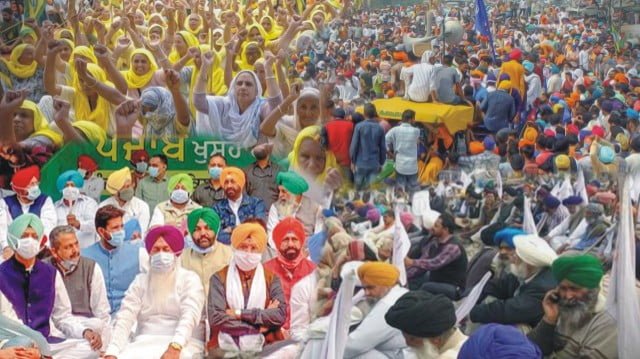 What pushes us to reconsider our approach to the current anti-Farm Laws protests?

OFFICIALLY, the anti-Farm Laws protests have gone on for over a month now. Unofficially, in Panjab at least, the protests have been more than three months old. The farmer unions are demanding withdrawal of new Laws. The Central government has not budged. Owing to earlier rail roko by unions, which has now been lifted, the government has not started the trains.

Panjab is facing a crisis in supply of urea and DAP, staring at being unable to plant potatoes and wheat. Panjab has run out of coal stock for power generation. Power cuts have become the norm. ASSOCHAM has said, goods worth Rs 7,500 crore have not been able to reach the industrial manufacturing hub Ludhiana, goods worth Rs 4,500 crore are lying on railway stations. Estimates are of Panjab facing a loss of Rs 15 lakh crore if the situation is not resolved.

In a rare show of unity, two weeks back all the political parties in Panjab passed Bills seeking to undo the new Central Laws.

While other non-BJP states are following the same path, it needs to be understood that sadly the BJP controls not only the Governor, the President, but also the Supreme Court. We must not really expect these Bills to even get a hearing anytime soon.

The fact is, while the Panjab state has promised Minimum Support Price to farmers, it is also contingent of the Centre, read BJP, sanctioning funds for procurement of rice and wheat from Panjab, Haryana and Western Uttar Pradesh.

The BJP has now cancelled the Rural Development Fund to Panjab, the battle lines are clearly drawn.

Soon after the show of unity by political parties, the parties are back to bickering again. The President has not granted audience to the Panjab chief minister. The CM also held a Symbolic Dharna at Jantar Mantar. The opposition parties too are on protest against the CM.

A few days back, a senior bureaucrat suggested a slight tinkering of the Food Security Act and offering a legal protection for Minimum Support Price, thus satisfying all sides involved. That could be a typical bureaucratic way of solving the issue for now but it is still not a permanent solution to the multiple agrarian woes that afflict the ‘granary of the nation’.

The main point of the farmer unions is: restore MSP. This demand begets the question: at whose cost must the 6 per cent farmers from the granary of the nation get the MSP? Also, should MSP really be the only demand?

The fact is, even when MSP was available in the past few decades, the entire agrarian sector was suffering. This distress is what led to farmer unions protesting for some cause or other for the last many decades.

The MSP is linked to the era of the Green Revolution. However, it is this Green Revolution that has devastated Panjab’s economy, health, ecology and environment – land going fallow, water table dipping.

Over the past many decades, the massive production of rice and wheat through the Public Distribution System has also devastated the food eco-systems of states like Karnataka, Telangana and Andhra Pradesh whose staple diet was ragi and jowar.

The rice and wheat procured through the Food Corporation of India has also depressed the prices of rice in Bihar, Bengal and Odisha. Since FCI procures from the granary, it does not buy from local farmers and they never get a good price, leading to perpetual poverty among them.

That is why the MSP is not only an economic but also an ethical question. Would the farmers of Panjab like to maintain MSP at the cost of their brethren in other parts of the country?

This is what pushes us to reconsider our approach to the current anti-Farm Laws protests. There is no doubt that the incumbent Central government has passed these anti-farmer laws by stealth and bulldozed the Parliament to help the crony capitalists. But the fact is the government was under immense international pressure to bring these failed neo-liberal policies to the agrarian sector.

If we look closely, we realise that the new Laws were not sudden. On February 22, 2018, Dr Rajiv Kumar, Vice-Chairman of NITI Aayog, told Panjab not to bother about national food security, but secure the income of its farmers, besides reducing pressure on its soil, power and underground water.

At that time, the CM Amarinder Singh, reiterated his demand for the ‘special category’ status for Panjab. This demand was rejected. In fact, Dr Kumar asked Panjab to get out of wheat-paddy monoculture and sell produce in the open markets.

While media screamed these statements, neither the government, nor the farmer unions took them seriously. Looking at the new anti-farmer laws with this hindsight, it is clear that the Centre was moving in this direction even two and a half years ago.

In any case the farmer unions have been aware of the General Agreement on Tariffs and Trade Agreements, Uruguay rounds to which India is a signatory. They are aware of the World Trade Organisation designs for the last three decades.

That is why it is important to address the concerns not only these new laws are going to create but also the continuously degrading situation of agriculture and find indigenous solutions to them. The answers lie with us, if we are willing to accept them and work towards them.

For solutions to work, the state and Centre governments, as well as the unions should apply themselves on the ground.

a) The answer to chemical and heavy machinery (Green Revolution) farming lies in Baba Nanak’s natural farming and diversification to lentils, vegetables, oil seeds. Over more than a decade now, above 10,000 natural farmers in Panjab have proven this thesis.

The need now is for the government to establish a policy framework for natural farming and encourage farmers and farm labour and arthiyas to move towards farming that protects and nourishes the land and water resources and allows for diversification of crops.

b) The ownership of small and marginal farmer lands needs to move towards a cooperative entity. It is only through consolidation that the small and marginal farmers can take on the big corporates. We already have a cooperative structure at the village level. We need to consolidate it and build upon it. The Jutts need to learn from Dalits who have been struggling in Malwa for their rightful land and tilling it profitably for the last few years.

d) Panjab is in the corner of the nation. It is 3,000 kilometers from Kerala and Tamil Nadu and a few meters from Pakistan. Panjab must prevail upon the Centre that, through the neighbouring nation, it can trade with the Balkans and East Europe.

That is how, as the BJP puts it, the Panjabi farmer will be truly ‘free to trade anywhere’. Panjab should take the BJP on their word and not limit it to the nation alone but go international.

e) All of the above need leadership, support and money. Caught in the cycle of loans, a small and marginal farmer cannot suddenly move from GR to natural farming. The land needs time to rejuvenate, new crops might initially fail.

Through all this we need to protect the farmer and labour. The monetary support can come from Panjab’s vibrant Diaspora. For that Panjab needs to build a bank – a system of trust – in which people can invest. Again, the government must play a role in the creation of a bank.

This does not mean we stop protesting. We must protest but instead of the current impasse we must seek MSP for the next five years because that is the time Panjab will need to transition from GR farming to natural farming.

The farmer unions have good local organisation and structures. While protesting the new Laws, they must start the effort to build local networks and moving in the directions outlined above.

We must also realise that to be competitive in the international natural produce market, we need to follow and practice a high degree of compliance with standards. This is where the government, the universities, the research centres, the scientific know-how have a role to play.

Before the previous election, Captain Amarinder Singh had declared that this was his last term. Now, Captain harbours ambitions for another term. It does not matter how many terms Captain gets; what matters is what legacy he leaves behind. Shifting Panjab from GR farming to natural farming is perhaps the worthiest legacy he can create.

Moving from GR to natural farming is a lot of work – a social and economic revolution. Panjab has earlier in history reinvented itself many times. It can do so again and become the lighthouse to the world. It is a battle for Panjab’s survival and we must fight it together.

PrevPreviousRSS Role in 1984 Sikh Massacre; What Nana Deshmukh wrote?
NextIs Arnab Getting The Taste Of The Journalism He Has Created?Next
Author Related Post
Related Post