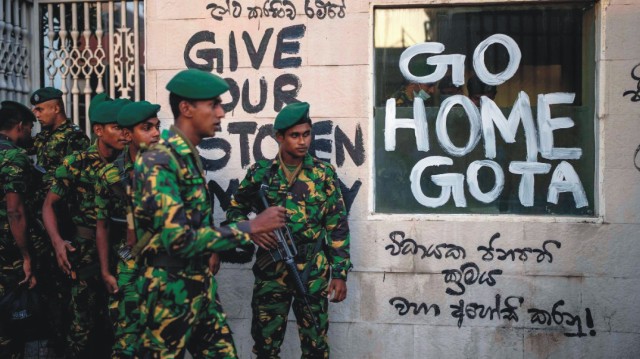 The political tendency in Sri Lanka has been to bestow more powers to the President; autocracy has been the overall direction of the regime.

The crisis in Sri Lanka has shaken not only its citizens but the entire world, the neighbouring countries in South Asia in particular. At one level there is a humanitarian crisis; at another we can see the impact of autocratic and discriminatory policies on citizens, particularly workers, Tamil and Muslim minorities and ordinary people.

The sight of thousands of people surrounding and occupying the President’s House in Colombo and torching the private house of Sri Lanka Prime Minister Ranil Wickremesinghe is frightening. The shortage of food, petrol and medicines has led to immense misery among the population.

The political tendency in Sri Lanka has been to bestow more powers to the President; autocracy has been the overall direction of the regime. Its autocratic nature has been complete from last few decades. The dictatorial autocrats have taken economic steps which have ruined the foundations of economy.

Liberal imports particularly of luxury items and reckless privatization have been two major factors apart from whimsical mega projects like Mattala Rajpaksa Airport, which is hardly useful has emptied the treasury to a large extent. 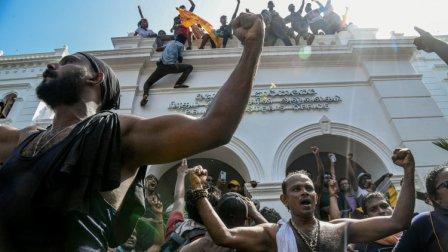 The food crisis, apart from other things, has gone for a free fall due to a senseless ban on import of fertilizers and total emphasis on organic agriculture which has brought down the food production in a drastic way.

Such economic misadventures have a lot to do with the dictatorial nature of regime, where one person (or family combo) takes the decision as per their whims and fancies.

The rise of such an autocracy has a lot to do with the parallel policies which have oppressed and marginalized the minorities, Tamil (Hindu), Muslims and Christians.

Sri Lanka had close links with India and it was here where Emperor Ashoka sent his son Mahinda and daughter Sanghmitra to propagate the values put forward by Tathagat Gautam Buddha.

It was here that large number of Tamils (mostly Hindus) migrated either as plantation labors or for trade relations. While the native Sinhala are mostly Buddhists, Tamil Hindus (12.9%) are in substantial number and are followed by Muslims (9.7%) and Christians (1.3%) in population.

Being a post colonial state, it also had ethnic identity highlighted due to the British policy, which divides the population on the ground of religion in particular. The Sinhala Buddhists claimed to be the ‘first comers’ and so having primacy in rights. Hindus (Tamils) were presented outsiders, ‘non natives’ and so deserving no rights.

Rohini Hensman, a scholar activist of Sri Lankan origin gives a very comprehensive account of the roots of ethnic religious divides on which major political parties harped and in due course this gave rise to the anti-people; autocratic regime of Mahinda Rapaksa and Gotabaya in particular. (Rohini Hensman, Nightmare’s End, 13th June 2022, New Left Review).

With Independence in 1948, the two major parties already came to an agreement to deprive a million Tamils of more recent Indian origin of their franchise and citizenship.

She points out “The exercise was carried out in a patently discriminatory manner by demanding that these poverty-stricken and super-exploited workers provide documentary proof of Sri Lankan ancestry which the vast majority of Sinhalese citizens would not have been able to provide.”

She recalls a childhood experience of her own. In 1958, she had to leave her place, near Colombo, as anti Tamil squads were out to target Tamils. Her father was a Tamil.

In 1956, S W R D Bandarnaike came to power by promising to have Sinhala as the only National language. Tamils in Sri Lanka felt discriminated against and launched an agitation against it. An extremist Buddhist monk from right wing Sinhala organization murdered him, for not going far enough in suppressing Tamils.

In 1972, a new Constitution was enacted. This brought in Sinhala as the only official language. This Constitution also gave special status to Buddhism. Protection of rights of minorities was done away with. 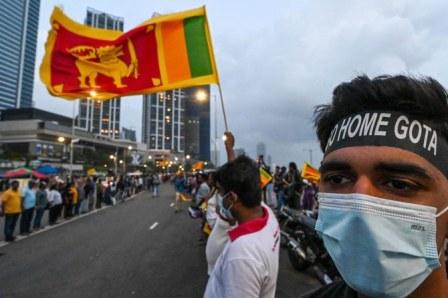 Later in 1972 and 1975, in the name of nationalization of plantations, the Tamils in Sri Lanka were deprived of their livelihood and left to starve. Administration gradually turned more rightwing, freedom of expression and democratic rights were crushed by and by.

With Mahinda Rajpaksa coming to power in 2005 the attacks against Tamils increased and death squads targeted the critics of the Government.

In response, the Tamil United Liberation Front (TULF) called for the creation of an independent Tamil Eelam. Militant groups, most notably the Liberation Tigers of Tamil Eelam (LTTE), was formed to fight for this goal. As Tamils’ dissatisfaction peaked; LTTE resorted to acts of terror. This worsened the situation. A sort of war was launched against Tamils, in which as per UN estimates 40000 civilians lost their lives.

There were two reasons for this, one LTTE used civilians as life shields and Gotabaya Rakpaksa, the then Defense Secretary, asked for bombing of civilian targets, including Hospitals and safe zones.

Hensman writes “…the Rajapaksas also funded Islamist militants to fight against the LTTE – who remained on the government payroll as informants despite credible intelligence that they had been radicalized… The final blow to its credibility was the Easter Sunday terrorist attack in 2019, which killed 269 people in locations across the country. As it turned out, the bombings were perpetrated by the very same Islamists that the Rajapaksas had been bankrolling.”

Right wing Buddhist groups like Budu Bala Sena were the foot soldiers and Sinhala masses were strongly behind Rakpaksas. With the elimination of LTTE, the new enemy was found in the Muslims. State sponsored Buddhist monk groups came up targeting the Muslim minority.

With the economic downslide of the regime, without and democratic safeguards, it became totally unresponsive to the economic suffering of the masses. The high handed policy making proved to be the undoing of Sri Lanka. The rising dissatisfaction of most sections of society led to the present horrific incidents.

What can we learn from this totally disastrous style of ruling, the intensification of sectarian divides, propagation of ‘majority religion in danger’ (in this case Buddhism) the marginalization of minorities and power being concentrated in couple of autocrats is there for all to see.

Autocrats think they know all and take decisions which in due course ruin the nation and intensify the ethnic divides.