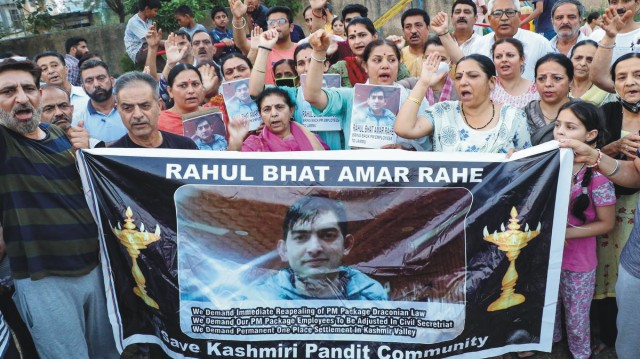 The communal forces have totally misrepresented the complex processes of Kashmir imbroglio.

Killings by Pakistan trained, pro-Pakistan terrorists have been unrelenting in Kashmir. When Modi announced demonetization, one of the arguments was that this is aimed at containing terrorism in Kashmir. Later even while abolishing article 370 and 35A this was to be one of the aims.

In this background we get the disturbing news of the killing of Rahul Bhat, A Kashmiri Pandit (KP) by Kashmir Tigers, a militant pro-Pakistan outfit. The loud mouths from the ruling establishment are silent on this while the Whatsapp University got one more point to blame the Kashmiri Muslims for this brutal killing. As such the brutal act has been done by the terrorist outfit, trained into inhuman methods by the Pakistan based training camps funded by America. 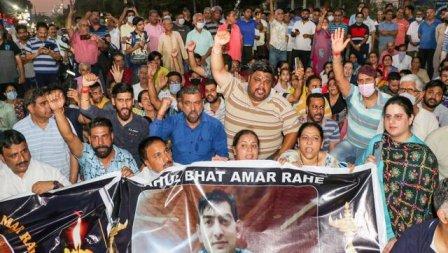 The Kashmir issue has multiple factors contributing to the present turmoil. The alienation of the locals due to erosion of autonomy has been the fertile ground on which the crops of terrorists were grown by the neighbor fully backed by America. America’s goal was to keep control on the oil resources of West Asia. The complementary aspect of geographically strategic importance of Kashmir was also one of the reasons for America to operate through its vassal Pakistan.

Earlier attempts were made even by Atal Bihari Vajpayee to have dialogue with diverse groups of Kashmiri dissidents. He very aptly said that the solution to the Kashmir issue lies in ‘Insaniyat, Jamhoriyat and Kashmiriyat’ (Humanism, Democracy and Kashmiri culture). Later Dr. Manmohan Singh also attempted to have dialogue with dissidents to solve the problem. Today while Vajpayee’s meetings with dissidents are put under the wraps, the meeting of Dr. Singh with Yasin Malik is highlighted to project as if Congress has encouraged such dastardly actions.

The first act of releasing the terrorists by National Front government (supported by BJP) when Rubia Saeed was kidnapped, are put under the carpet and Congress is blamed for the present plight in the region. The most needed process is of course that of rooting democracy and restoring autonomy. In turn what is being imposed is the Central rule and undermining the democratic process. The presence of the military in the area is the constant eye sore for civilian life. After 2014, with Modi coming to power the process is going in a reverse direction as far as democratic mechanisms are concerned.

One recalls that during the UPA regime there was a sincere effort to make the Pandits go back to their beloved land. A process was conceptualized to rehabilitate a few Pandit families back in the Valley. Good deal of monetary allocation was also provided for this work. One of the most important steps, which by now have been frozen, was the interlocutors report. The team of interlocutors sent by the UPA, was constituted by Dileep Padgaonkar, M.M. Ansari and Radha Kumar. The team travelled extensively and recommended the gradual restoration of autonomy. 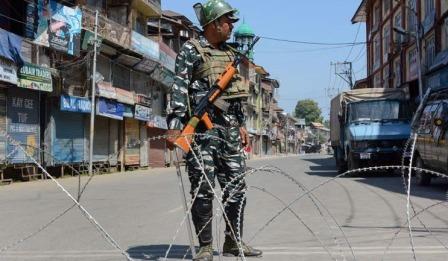 Abolition of Article 370 has been always on the agenda of BJP and was supposed to be a solution for all problems related to Kashmir. Two years down the line the civic life is much worse and democratic voices do not have much place in the policy making in the state. The murder of Rahul Bhat has underlined the continuing issues which dog the state.

The state of democracy can be gauged from what happened to the protestors who were trying to meet Lt Governor, Manoj Sinha. He did not turn up to meet Kasmiri Pandits (KPs) and other protestors, so they planned a march to the airport. The police fired tear gas shells to disperse the crowd.

The manner in which the state is dealing with issues is well summed up in the tweet by Omar Abdullah, who called the move shameful:

“It’s shameful that legitimate & justified protests are met with a heavy-handed response. This is not new for the people of Kashmir because when all the administration has is a hammer every problem resembles a nail. If the LG’s Govt can’t protect KPs they have a right to protest”

The perception is created all over the country that Kashmir issue is a Hindu Muslim issue, with Hindu minority being oppressed by the local Muslims. This is what was forcefully presented in the film Kashmir Files, approved by bigwigs of right-wing. In contrast the reality is very different. Protesting Pandits in Anantnag on the killing of Rahul Bhat question asked whether this is the new Kashmir, Modi is talking about. KPs also are thanking Kashmiri Muslims for supporting them in their hour of grief.

While the claims of efficient administration abound, the agitating Pandits highlighted the state of security of the civilians where the militants can enter the Government building and kill the employee. Rahul Bhat’s widow Meenakshi Bhat said that “PM Modi and Amit Shah are using KP’s as scapegoats, they are using KPs as cannon fodder for their politics. I challenge them to come to Kashmir and roam around without security.” At the same time 350 Pandit employees tendered their resignations for security reasons. 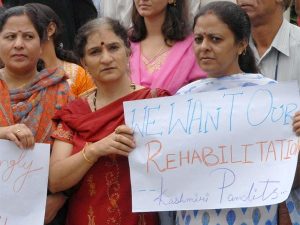 It is not that only Pandits have to face such a plight. In the aftermath of Rahul Bhat’s murder Riyaz Ahmed was also murdered. An RTI activist’s inquiry is very revealing. Terrorists in Kashmir killed 1,724 people – of whom 89 were Kashmiri Pandits and the rest were “people of other faiths”, including Muslims – over the past 31 years. This information comes after a wave of civilian killings in parts of J&K, including Srinagar, in the past few months, in which Kashmiri Pandits as well as many from other communities, including Muslims, and those from outside the union territory, were shot dead. Those killed are mostly pro-India elements.

The communal forces have totally misrepresented the complex processes of Kashmir imbroglio. The killing of Rahul Bhat and Riyaz Ahmed is to be seen as a part of the same process. In the light of the support of Kashmiri Muslims to Rahul Bhat’s murder we can clearly see the reality of local population Hindus and Muslims are together at social level.

PrevPreviousCM Mann directs SSPs to work in close coordination with STF to nab big sharks of Drug Mafia
NextGyanvapi Mosque: Digging up the past to ruin the futureNext
Author Related Post
Related Post