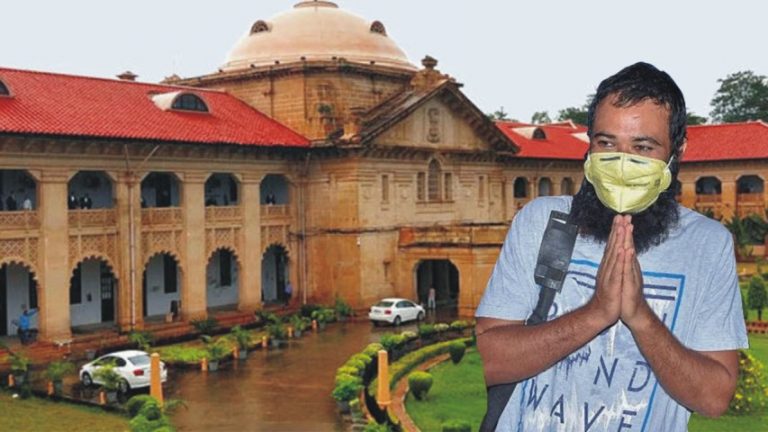 Kafeel Khan, the Uttar Pradesh doctor jailed under the tough National Security Act (NSA) for an alleged speech against the Citizenship (Amendment) Act or CAA, must be freed immediately, the Allahabad High Court said, calling his detention illegal. The doctor’s speech did not show any effort to promote hate or violence, the Court said.

Dr. Kafeel Khan was slapped with the order of preventive detention under the NSA on February 13, 2020. The subjective satisfaction for the invocation of NSA has its roots in the speech delivered by him on December 12, 2019, at Aligarh over the issue of the Citizen Amendment Act, etc.

A report was submitted by the C.O. of Civil Line, Police Station to the SSP that the speech delivered by Dr. Khan on December 12 was provocative, and it led to mayhem in Aligarh, after that, for several days also. The SSP, in turn, recommended for pressing NSA to the District Magistrate on the same day.

The District Magistrate, with the supersonic speed, accepted the report and ordered the fastening of NSA against Dr. Kafeel Khan on the same day; this itself reflects beyond any shred of doubt and also smacks the ill-considerations deployed dehors the law. The same warrants to be commented adversely by all and sundry.

The State Advisory Board, in terms of the law of preventive detention, also issued prohibitory orders, and further custody was extended for another three months. Thereafter, again on August 13,the NSA was further extended for three months.

The order of detention was challenged by his mother by invoking the Constitutional Provision of Article 226 before the Allahabad High Court. The systematic delay, which is prevalent everywhere because of the paucity of the Judges, the writ petition could not be heard, wherein the petitioner Khan watches perpetually languishing behind bars.

“… we are having no hesitation in concluding that neither detention of Dr. Kafeel Khan under National Security Act, 1980 nor extension of the detention are sustainable in the eye of law.” And the court further said, “The writ petition for the reasons given above is allowed. The order of detention dated 13th February 2020 passed by District Magistrate, Aligarh, and confirmed by the State of Uttar Pradesh is set aside. The extension of the period of detention of detenue Dr. Kafeel Khan is also declared illegal. A writ in the nature of habeas corpus is hereby issued to release Dr. Kafeel Khan, the detenue from State custody forthwith.”

The order of preventive detention is very atrocious, for there is no provision for legal assistance or bail or parole, and the detenu cannot be liberated without the lapse of the period of detention specified in the order of detention. A three-judge bench of the Supreme Court in the case of Alka Subhash Gadia propounded to provide the parameters for detention under the law.

The same is still holding the field, and another three-judge bench of the Supreme Court presided over by Justice Markandey Katju in the case of Rekha versus State of Tamil Nadu laid down specific tests to be adhered by the detaining authority before the invocation of the law of detention. The crux of the test is that it records the criminal proceedings to deal with alleged prejudicial activities if sufficient to contain; in that situation, the order of detention would be illegal.

It would not be out of context to highlight, herein, that the Supreme Court was apprised of the misuse of this provision by the executives at the command and dictates of their political bosses in the most infamous case of the emergency era, namely, the ADM Jabalpur’s case.

The eminent lawyers expressed their apprehensions qua the atrocious assault on the liberty of the citizens by the executives at the instance and instigation of the ruling political dispensation to which Justice Y.V. Chandrachud vide para (421), reacted that

“Counsel after counsel expressed the fear that during the emergency, the Executive may whip and strip and starve the detenu and if this be our judgment, even shoot him down. Such misdeeds have not tarnished the record of Free India and I have a diamond-bright, diamond-hard hope that such things will never come to pass.”

The truth surrounding over the phrase of diamond-bright and diamond-hard hope is revealing in no uncertain terms that the brightness of the diamond has disappeared to permanent obscurity and the hardness of the diamond shattered to irredeemable pieces.

Resultantly, the law is being mercilessly for the reasons other than legal and legitimate is being misused to score the brownie points and muzzle the voice of dissent.

This was the Judgement of the constitution bench comprising of 5 Judges. The lone dissent was of Justice H R Khanna, who earned an unforgettable name in the history of the Indian Judiciary and was also recognized by the international media.

It will not be out of context to state herein that a few years ago, Justice P N Bhagwati, who was also the assenting Judge of the majority judgment and who also known as the father of public interest litigation, regretted in a TV interview that he consented to hold the constitutional validity under challenge, under the pressure of one of the brother Judge.

Democracy is known to be the “Government for, by, and of the people” as said by former US President Abraham Lincoln. In this scenario, heavy-duty is cast upon the constitutional courts to give utmost precedence to the liberty of the detenu in terms of Article 21 of the Constitution of India over other matters, lest the liberty is laid to eternal rest by the holders of the rein of democracy at their whims and avarice. And at the same time, the executives are expected to show their fortitude to the law and law only, nothing else.