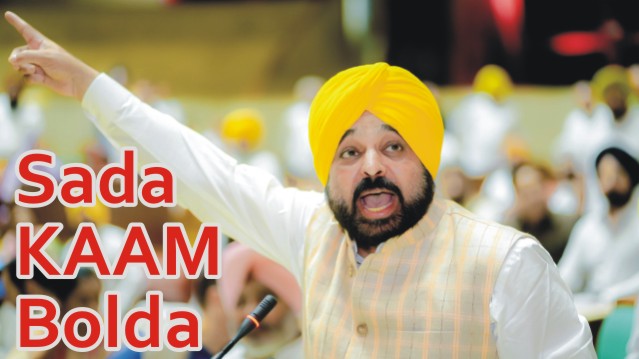 Are the concepts like dignity, sobriety and grace so alien to AAP honchos that they can now churn out obnoxious stuff like “Saada Kaam Bolda!”

“Sada Kaam Bolda!” India’s leading English and Hindi language television channels are currently airing a rather longish advertisement of the Punjab government, paid for by my state’s taxpayers, that is insulting to all Punjabis, corrupts the metaphor of the youth, is a subtle attack on our mother tongue, and is an act of out and out ‘thuggery.’

“This utterly debased advertisement talks of the Kaam speaking loudly in a political matrix where many AAP ministers and MLAs are making news for assaulting their wives, being embroiled in extramarital affairs or pursuing divorce cases on doubtful grounds. A few are busy getting married or remarried. In such a scenario, what do you think “Sada Kaam Bolda” represents,” senior politician and former Deputy Speaker of Punjab Assembly, Bir Devinder Singh, said here on Friday.

Demanding an immediate stop to this less-than-civilized advertisement and the accompanying ditty that talks less about “work” and sounds more like “erotica,” Bir Devinder Singh said the advertisement is basically aimed at voters of Himachal Pradesh and Gujarat where the reality of AAP’s intellectual, cultural, social and political bankruptcy is still not known. 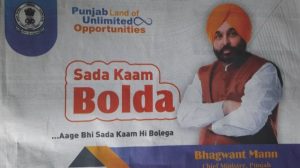 Complete with the state’s official insignia and pictures of Chief Minister Bhagwant Singh Mann, the advertisement is an insult to Punjabi aesthetics. “I can say with complete responsibility that when any sane person encounters this advertisement, he or she only understands one fact: ‘Sirf Kaam Bolda Hai!‘

I urge this AAP government not to get so sucked into this kind of erotica and pay attention to the work for which they were voted into power,” Bir Devinder Singh, known for his legislative skills and understanding of the Punjabi metaphor, said.

“In the garb of modernity, rap and its youthful but misguided brigade, neither Arvind Kejriwal nor Bhagwant Mann can be allowed to misrepresent Punjab’s ethos and culture. Our public discourse is peppered with metaphors like ‘Charhdi Kala’, ‘Punjab Vasda Guru De Naaon‘ and ‘Sarbat Da Bhala’. If the state government is paying for an advertisement, it is expected to hold the high bar of language, idiom and message. Mann and AAP are failing on all these counts,” Bir Devinder said.

Those creating any advertisement paid for by the taxpayer always take care that it must not even tangentially be liable to be used as a ‘double entendre’, Bir Devinder Singh said, adding that he has received complaints from many dignified citizens, including women, who asked him to try and privately prevail upon the government to stop such linguistic and cultural corruption. “But this government is oblivious to such concerns,” he said.

“What happened to concepts like dignity, sobriety, solemnity, humility and grace? Are these so alien to AAP honchos that they can now churn out obnoxious stuff like “Saada Kaam Bolda Hai?” Stop dirty allegories, plain lies and hyperbole claims. Get down to work and you might have something to crow about,” the former parliamentarian advised the AAP government.

He urged Chief Minister Mr. Bhagwant Singh Mann to immediately withdraw this advertisement that represents naked vulgarity or at least amend it appropriately so that it sounds less crude, if he cannot make it dignified.