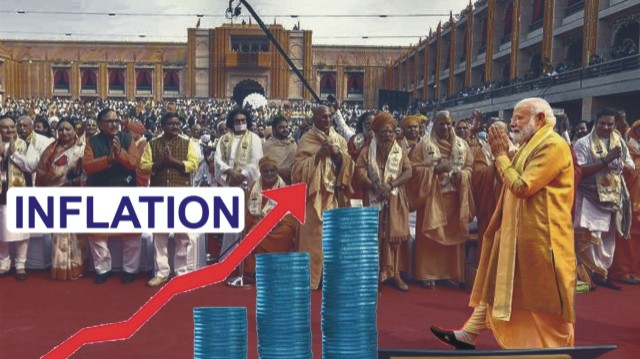 Only a hand full of television channels, mainly those focussed on economy and finance, had been discussing the vital issues of inflation and employment.

An all time high inflation in wholesale prices in the country at 14.23 per cent in November, up from 12.54 per cent in October, together with a decline in the employment figures, is a matter of great concern and the government must pay serious attention to the developing economic crisis looming on the country.

The record Wholesale Price Index (WPI) has come on the heels of the worrying official figures on retail inflation for November. It had shown a sharp increase to a three-month high of 4.19 per cent despite a cut in excise duty on petrol and diesel.

As is common knowledge the prices of vegetables have touched unprecedented levels with tomatoes selling at over Rs 100 per kilogram and peas upto Rs 200 per kilogram among other high priced vegetables. Same is true of pulses and edible oils.

With no corresponding increase in income, the common households are facing a very tough time.

An official statement attributed the high rate of inflation “primarily to the rise in prices of mineral oils, basic metals, crude petroleum and natural gas, chemicals and chemical products and food products”.

The wide gap between WPI and Consumer Price Index (CPI) inflation reflects the price pressures on the inputs side, which are expected to pass through to the retail level in the coming months. The rise in inflation is primarily due to the hike in food prices especially of vegetables, and minerals and petroleum products, as per data released by the Ministry of Commerce and Industry.

While inflation, riding on high fuel prices, has led to distress among the common people, it is double whammy for the unemployed and the underemployed. According to Centre for Monitoring of Indian Economy (CMIE), India’s unemployment rate sharply rose to 7.75 per cent in October from 6.86 per cent a month ago. Significantly, while the urban joblessness rate fell to 7.38 per cent, the lowest in three months, the rural joblessness rate rose to its four-month high of 7.91 per cent in October.

The over all employment rate is yet to come back to the pre-Covid level. It implies that job losses due to Covid pandemic have still not been fully restored.

Sadly, while large sections of people are facing such a serious economic crisis, political leaders and media, particularly the electronic media, remains obsessed with politics over Hindutva and the political discourse remains laced with communal and religious divide.

The ruling party must share the main blame for obsessing about religion and making it the most important agenda for the ensuing Assembly elections in some states, the opposition parties also appear to be falling in the same trap.

On Sunday, the Congress organised a large rally in Jaipur to protest against price rise and inflation and one thought that at least some party is paying attention to this major issue affecting the common man. However the focus of the rally was again diverted with a comment by Congress leader Rahul Gandhi over difference between Hindus and Hindutva.

The Congress, like some other opposition parties, is making the blunder of taking on the Bharatiya Janata Party on its own turf of Hindutva. Instead of focussing on the unprecedented price rise and the growing unemployment rate, these parties are encouraging the BJP to reinforce its agenda with all the more vigour.

The recent two day visit of the prime minister to Varanasi and the blatant show of the religious agenda at the cost of public exchequer was duely magnified by a section of electronics media which believed that nothing else worth its attention was happening in the country.

Only a hand full of television channels, mainly those focussed on economy and finance, had been discussing the vital issues of inflation and employment. No wonder common people have stopped watching the so-called news channels.