Can India become an Islamic Emirate? 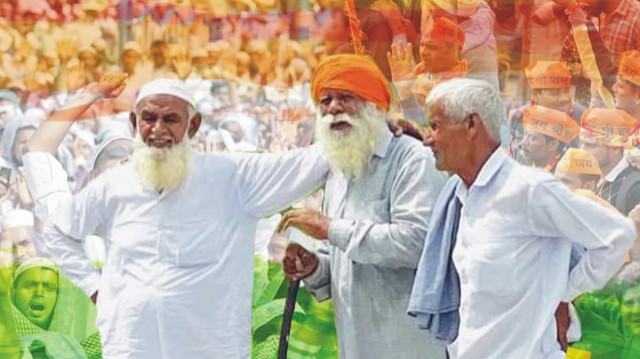 This propaganda is not good for overall interest of India.

I am going to keep this short and sweet. The population explosion of Muslims and the idea of an Islamic Republic of India is often a tool for fearmongering by Hindutva groups in India. I have tried to investigate the truth, which is often hidden behind the facts.

To understand this further, I tried to uncover the population distribution from the last several census data published by the government and used mathematical extrapolation on top of it to forecast future trends. It reveals that for the next 100 years, Muslims will be less than 25% of India’s population, and Hindus will be nearly 70%.

This analysis is keeping in view the constant fertility rates of Hindus and Muslims. The Muslim Fertility rates have historically remained higher than Hindus. 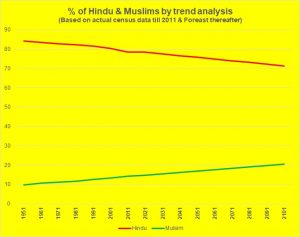 In the below figure, I have tried to understand how Fertility rates are changing. If we see there is a decline in Fertility rates of both Hindus and Muslims. I have taken National Family Health Survey Data here till 2015 actual data, 2020 is yet to capture at the national level, so I calculated the average of states, and beyond 2020 it is forecast data. 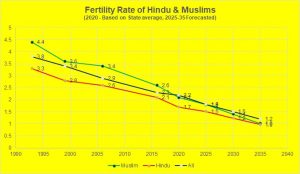 An interesting finding is that from 2025 both Hindu and Muslim fertility rates will drop, resulting in a population decline for both communities. As per the actual census, Hindus are already declining, and now Muslims will show the decline. By 2035, the Hindus and Muslims will have one child, which means two persons will produce one, leading to an exponential population decrease over the next few decades.

Looking at the above facts, the population explosion of Muslims or the future Islamic Emirates in India is a myth.

The better way to ensure the demographic balance is to elevate education, allowing opportunities for growth and driving prosperity and engagement across various communities.

Unfortunately, the Hindutva groups have misled the innocent, unsuspecting population and manufacturing the divide between communities. This propaganda may adversely impact the demographic balance in pockets and is not good for overall interest of India. My intent here is to bring the reality for a better fact-based conversation.