Thind and Aulakh promoted To IAS cadre from Punjab 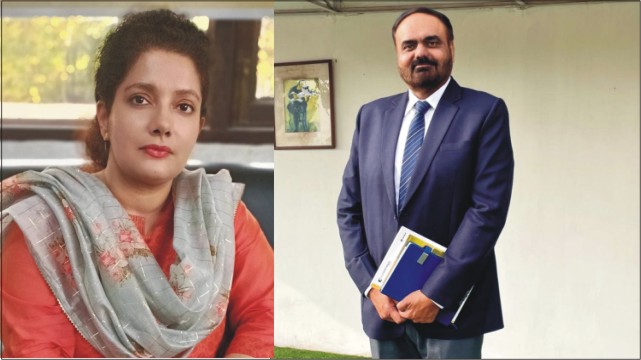 CHANDIGARH, MARCH 15: With the Union Ministry of Personnel issuing the notification in this regard, two Punjab state service officers – Gulpreet Singh Aulakh and Dr Sona Thind – have been promoted to the prestigious union Indian Administrative Service (IAS) cadre.

In total, 10 officers who had been recommended by Punjab government ranging across a wide spectrum of state services were interviewed by Board for two posts on February 5 last month at the UPSC headquarters in the national capital.

The state qualification criteria for recommendation of candidates for the UPSC interview entailed rigorous matching up of exemplary service record, length of service and above all the nuanced understanding and appreciation of their departmental domain areas.

1973-born Gulpreet Singh Aulakh, a B Tech Engineer joined the department on September 14, 2000 as Soil Conservation Officer; and has been instrumental in leading several consequential projects undertaken by the department over last two decades. At present, Aulkah is serving as Divisional Soil Conservation Officer and is posted at Chandigarh Office.

Dr. Thind, a 2005-batch Punjab Civil Sevices (PCS) Allied Officer has carried on her department’s special tradition of churning out IAS officers regularly. She is the third officer of the Food department to have bene elevated to the coveted national service in the last five years. Karnesh Sharma and Dr Bhupinder Pal Singh have both served as Deputy Director Field and Additional Director respectively before being anointed as IAS in 2015 and 2016.

Thind and Aulakh promoted To IAS cadre from Punjab....