A CM and an IAS officer – Yeh Lo Mera Resignation 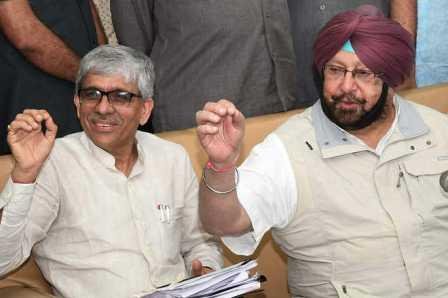 By a politician (currently not much in favour)*

FOR DAYS, the media was rife about seasoned bureaucrat Suresh Kumar putting in his papers; then news came of his meeting with the CM, he was back on his desk, and everyone heaved a sigh of relief.

But should the issue be allowed to go away just like that?

There has been some commentary in the media about Suresh Kumar’s quitting earlier, too. Much of it was on the lines of ‘yeh baar baar wahi baat ho rahi hai’. But it reflects on the state of our politics, too! And the state of our journalism, as well.

What does this IAS officer want? Did he run after the job he was called upon to perform? Did he smooth-talked to the politicians and their lackeys to get this job? Did he play the dirty tricks to get to keep his job?

Suresh Kumar was enjoying his retirement, reading stuff, sitting at home, sometimes participating in seminars convened by activists. He wasn’t hankering after a job. He was approached by a newly elected CM, who convinced him that he will get the freedom to do what he was expected to do.

You may have an opinion whether or not a retired senior officer should be redrafted into the government structure, but surely it was no one’s, not even his enemies’ case that he had wangled the job.

When he saw that elements within the government were trying to pull the rug from under his feet, he called it a day, gathered his papers, went home and said ‘I’m done.’ Then everybody and his uncle, and the CM, urged him to stay on.

Again, you may have a different view on whether one officer can be so indispensable that the CM has to go to his home to mollify him and reassure him that he will get the freedom to do his job, but again, even his detractors did not say he was doing anything underhand.

All this while, wayward elements in the power structure kept undercutting him, a legal case was mounted against his appointment procedures, his power in the decision making process was called into action — and he asked the government that had appointed him to defend him in court. Or to free him of his responsibility.

What more honourable action can an IAS officer take? Which part of this entire saga were you unaware of?

And what happened this time? The same thing. You know it, I know it, everybody and his uncle and the CM knows it.

What did he do? Exactly the same thing!

He wanted the government to either defend him in court, or to free him of his responsibility.

And what was the debate in the media? “Yeh baar baar wahi baat ho rahi hai.”

Again, you can have a view about his indispensability or about the procedures followed to appoint him or about the wisdom of redrafting into service a particular officer after his retirement, but the question we ask is a different one: Is it not our expectation that every IAS officer should act in the same manner?

If the government appoints an officer, it is duty-bound to ensure that he can work without fear or favour, without people in power corridors constantly trying to undercut him, without those with shadowy and shady ways to get close to a CM conspiring all the time to skirt their way around and push files and decisions in grossly illegal manner.

And other officers should find the guts to do the same thing, at least once, if not again and again.

Post Script: Personally, I wish we had a large crop of able bureaucrats so that no CM has to depend on just a couple of people. That choice should be wider. Also, people like Suresh Kumar, who is widely appreciated for his honesty, diligence, grip on law, processes and file work, should also ask themselves why has the system not produced more of their ilk? One day, when he finally bids adieu to the secretariat, I hope he mulls this over and writes about it so that it becomes a public debate, just like his resignation threats became. Till then, for God’s sake, let the good men work, few as they are.

(The writer is a politician, currently somewhat out of favour with powers that be, and has avoided giving out her/his name, lest it colours the argument she/he is making. Punjab Today respects that sentiment. — Editor)

The Guardian view on the Afghanistan withdrawal: An Unwinnab....

The Guardian view on Modi’s mistakes: A Pandemic That Is O....

What happens if a US presidential candidate dies before the ....