Amitabh Bachhan can't be our Hero; Our hero could be the honest officer who caught a CHEAT 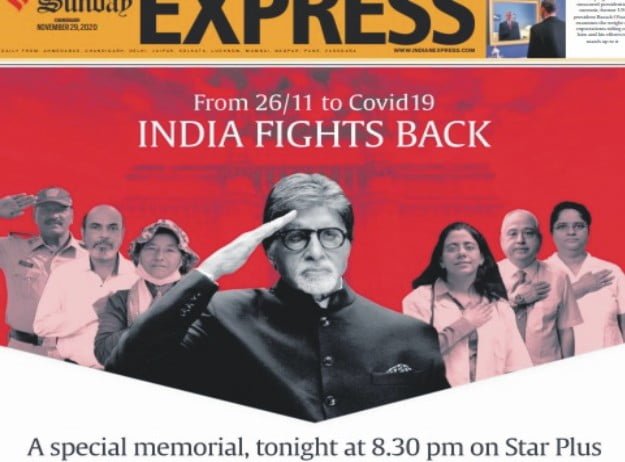 Journalism of Courage should introspect about its choice of a Hero

Amitabh Bachchan claimed he was a farmer.
His friend Mulayam Singh Yadav allotted him land in Barabanki district.

Barabanki District Magistrate Ashish Goel cancelled the allotment – he said that the land revenue records were fake. ASHISH GOEL was a HERO.

The District Magistrate Barabanki had alleged that the Bollywood icon had ‘misrepresented facts’ to receive the benefit. AMITABH BACHHAN NE ZAMEEN HADAPNE KE LIYE AFFIDAVIT PAR JHOOTH BOLA. In many other countries, he would have been in jail for perjury, cheating, lying and falsifying documents. In India, they transferred the District Magistrate. The next guy who came in as DM stayed the order cancelling the allotment.

Faizabad Additional Commissioner Vidya Sagar Prasad dismissed the writ by Amitabh Bachchan who had sought review of Barabanki District Magistrate’s order of quashing the allotment of this government farming land to him.

AMITABH BACHHAN DID NOT STOP AT CHEATING IN ONE PLACE, IN ONE STATE, FOR ONE PIECE OF PRIME LAND.

He used the fact of this allotment of land in BARABANKI to establish his credentials as a farmer to buy agricultural land in PUNE, MAHARASHTRA where only a farmer could purchase such land.

MAHAAN HERO KI MAHAAN STATEMENT AT THAT TIME WAS — “I am a law-abiding citizen and will obey whatever the law asks me to do. If proved wrong, we are ready to face penalty. If everything is found to be in order, I would say thank you.”

By the way, the then Samajwadi Party MP Jaya Bachchan had not mentioned the said property in her declaration when she filed her nomination for the Rajya Sabha poll in 2006.

Amitabh Bachhan could not get the land but ONE ENEMY STILL REMAINED — GOOGLE. You could Google, and it would throw up the facts that your HERO was actually a CHEAT.

So, Amitabh Bachhan decided to become a hero. He paid off minor loans of a few hundred farmers in Uttar Pradesh and his PR machinery worked overtime to ensure that the news is all over.

Now, if you Google, you will find that Amitabh Bachhan is the hero who paid off loans of poor farmers, but it was a ploy to push further down the Google search the tens of news stories about this filmi hero trying to cheat and pose as a farmer.

EVENTUALLY, Amitabh Bachhan, through his friends in the government, pressurised the panchayat in Daulatpur village of Barabanki to let him off the hook, and abandoned his claim on the land.

THIS IS THE ONE VILLAGE WHERE THE UP GOVERNMENT WORKED EXTRA HARD TO CONVENE A GRAM SABHA that passed a resolution to say that since the film actor has given up his claim on the land, the panchayat will not further pursue the legal case against him.

HERE IS AN EXCERPT FROM THE AFFIDAVIT FILED BY BACHHAN’S LAWYER:
“The petitioner hereby declares that he has now abandoned his claim in respect of the land at Daulatpur village in Barabanki district since the gram sabha has agreed not to pursue the matter any further…”

The affidavit also prayed that the court pass an order that no proceedings, “either civil, revenue or criminal in nature” be initiated in future against the actor.

If the JOURNALISM OF COURAGE wants to see a HERO in AMITABH BACHHAN, it is most welcome to.

When Muslim cattle traders were being lynched in the country, and the BJP had hyped up the ban on beef in India, Amitabh Bachhan was asked on a TV channel about his views on the controversy. His considered response was:

PrevPrevious#DilliChalo march has shattered the miasma of Hindutva’s power and arrogance
NextWhy are farmers protesting when govt says these laws are good for them?Next
Author Related Post
Related Post