A Riveting, Lyrical Re-Telling of Heer 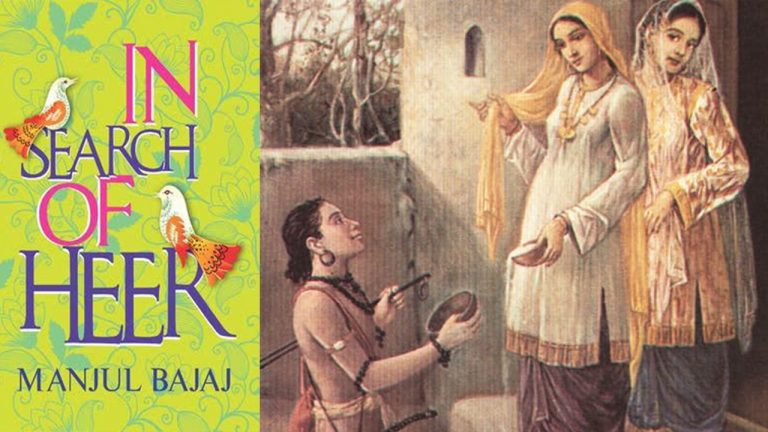 Through the character of Heer, the story is high on women’s rights.

In Search Of Heer, by Manjul Bajaj, is an excellent re-telling of the Panjabi tragic-romance of Heer-Ranjha, first attributed to Damodhar Gulati in the seventeenth century and later other poets including the famous Waris Shah in 1766. As with all good re-tellings, Bajaj not only brings alive the story of love, betrayal and loss framed by patriarchy and feudalism, she infuses new life into it by experimenting with points of views, gender norms, and even the ending. (Manjul is a writer and poet based in Gurgaon. She moved from developmental economics into full time writing and is famous for her earlier novel Come, Before Evening Falls and short story collection Another Man’s Wife.)

The basic legend is well known: After Ranjha’s father passes away, he is cheated of his inheritance by his brothers and he walks out of home. After an arduous forest travel he reaches the Chenab riverbank and gets on to the boat to Heer’s village. He meets Heer and confesses his love. She takes him to her father Mir Chuchak who employs him as in-charge of his cattle.

Heer and Ranjha marry in a cave with the blessings of Panj Pir. Heer’s uncle Kaido poses problems. While Chuchak is away, with the help of the Qazi, Kaido conspires to get Heer married to Seida to who she was betrothed at birth. Ranjha follows her but loses his way and goes on to become an ascetic. The endings vary from version to version. One says, Kaido poisons them. Another says, the lovers escape. What we have after nearly three hundred years after the supposed story played out is a tomb to Heer Ranjha at Jhang.

The 293-page book opens with that map of the greater Panjab before it was lacerated by the Radcliffe Line into modern nation states. Today, the locations of the story – Takht Hazara from where Ranjha hails, Jhang from where Heer from the Syal tribe hails, Rangpur where Heer is wrongly married, Tilla Jogian where Ranjha goes when he loses Heer – are all in what is today Pakistan.

Yet, we from Panjab, from north India, still quiver upon the hearing of the story. It indeed needs guts to tell the story in English, in a modern idiom, with a modern politics, and Manjul does very well here.

Manjul tells the story in ten parts, thirty chapters and employs six points of view including the crow, the pigeon, and the goat. My favourite is Part IV for its stunning narration of high achievements of humankind that ends in extreme depravity – child sexual abuse. Through the book there is no point where a reader feels deprived of information on the characters or events of the story.

Considering that the original Heer-Ranjha is a ballad, the music from Ranjha’s flute plays a major role in the story. It charms not only Heer, even her father Mir Chuchak, the beasts of the jungle, the cattle and the Jogis. Manjul evokes this music through her language – whether she describes nature, landscapes, emotions, characters or provides history or deliberates on reality. The language evocative of values, like the notes from Ranjha’s flute. Page 67 … The difference between a hero and a bandit lies not in how well each wields a sword, but in the cause to which their weapons are drawn.

As I turned the pages of the book to Part VI, the words that sprang to my lips were from the legend’s most popular version by Waris Shah: Doli chad-deyan maariyan Heer cheekan, mainu le chaleBabula, le challe … As the page opened I was struck by how Manjul too had started that part with the same pain: Babul, I left the doors of your house weeping… To me that is a testimony of a great rendering of an ancient and familiar story.

Through the character of Heer, the story is high on women’s rights. At the same time, Manjul is critical of the role women play in aiding patriarchy, whether it is Heer’s mother Malki under the sway of Kaido, or Seida’s mother silently suffering, or the observations made by the crow, the pigeon or Sehti.

In an earlier age writers assigned external deformities to characters with low morals. But that created issues of stereotyping of the genuinely differently-abled people. That is why I feel the depiction of Kaido as a cripple is not fair and could have been avoided. It would have meant Manjul having to ascribe other reasons to Chuchak for tolerating Kaido but she could have played with that as she brilliantly played with gender norms and ending.

ISOH is remarkable for how it opens up the possibilities of where the story goes. Quite like Life of Pi there is a possibility that Adali Raja who captures the fleeing lovers, recognises the merit of their bond over temporal laws and allows them to escape but burns down their prison cells to pretend they died in the accident. That is why a Bactrian camel tells us the lovers went to Persia, Agra and Kerala; their tomb is in Jhang; and this lovely book is in our hands.

Sangh Parivar – Whatever the Motive Behind a Shift in the Stance on Minorities, A Glimmer of Hope is Better than the Growing Despondency....