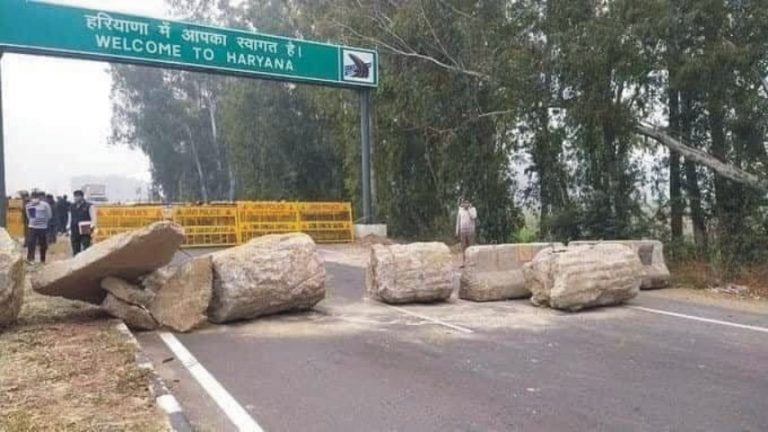 Sealing the Haryana borders to stall the Punjab farmers marching to Delhi demanding the scrapping the Centre’s farm laws is an authoritarian step aimed at provoking the democratic protestors to lose their cool thereby providing an opportunity for unleashing the state violence.

Sikh intellectuals associated with the Kendri Sri Guru Singh Sabha said the BJP led Haryana government had even arrested the state’s those farmer leaders who are opposing the Centre’s farm laws and proposed to join the Punjab farmers’ march to Delhi.

Stopping the agitating Punjab farmers at all entry points to Haryana is the repeat and reminiscent of the 1980s days when then agitating Akalis on the way to Delhi were obstructed, harassed, and bullied by the Haryana authorities to please then Prime Minister Indira Gandhi.

Those undemocratic acts of the then ruling Haryana politicians subverted democratic protests of the Akalis for preparing a ground for inflicting State repression on Sikhs. Consequently, Sikhs got alienated from the country’s mainstream which became the cause of tragic events of June and November 1984. All that gave birth to ultra-nationalist Hindutva, now out to establish ‘Hindu Rashtra’.

Developments of over the last 50 odd years since its creation of Haryana have testified that the province have been carrying the biddings of or acting on the behalf of the New Delhi masters unmindful of the long-term implications for its people. Haryana politicians rarely acted as rulers of an independent province. Practically Haryana has been behaving as a territorial expansion and extension of the New Delhi ruling elite into pre-1966 undivided Punjab.

Against the above-mentioned background, we appeal to the Haryana political class not to get succumbed to political expediency of the day and pick up a leaf from the horrible past experience and allow the farmers to reach Delhi territory. Haryana politicians should keep in mind that their farmers and that of Punjab share the same problems and they have same demand of retaining Minimum Support Price (MSP) for wheat, rice and other crops.

At the same time, we appeal to the regional and opposition parties of the country to support the farmers’ march and press the Modi government against adopting the dictatorial attitude vis-à-vis farm acts.