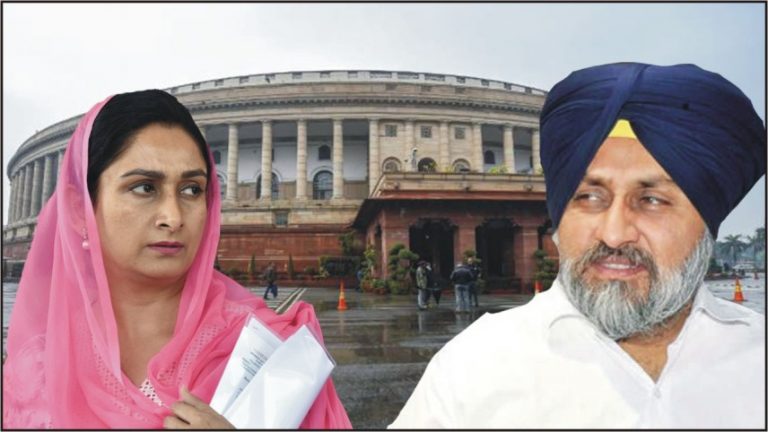 The political wisdom demands that Harsimrat Badal should have resigned immediately from the council of ministers.

The position of Harsimrat Kaur Badal has become ridiculously untenable after the President of the SAD (Badal) Sukhbir Singh Badal has opposed, (though quite belatedly), and expressed his opinion against, all the three Agri-Bills introduced in the Parliament on 14th of September 2020 .

The mysterious absence of Harsimrat Kaur Badal from the Parliament at the crucial time of the introduction of the bills and also when Sukhbir Singh Badal opposed, The Essential Commodity (Amendment) Bill, 2020 with a voice vote, yesterday.

The Political wisdom demands that Harsimrat Badal should have resigned immediately from the council of Ministers, when her Party has taken a definite view to oppose the Bills as such.

Now, Harsimrat must explain her public position with regards to the Bills, whether she complies with the views expressed by the President of the SAD (Badal) or she holds a different opinion, conflicting with the party position?

Since Harsimrat Badal’s abstention does not clarify the paradox, she must come out openly and make her position apparently clear on the issue. Badal couple cannot befool the farmers of Punjab anymore, through their enigmatic gimmicks in the Parliament.

The sudden change of mind and stance taken against the ill-effects of the Agri-Ordinances will not absolve the Badal Family and their party of the debaucheries, which they committed consistently, against the farmers interests, by unequivocally supporting anti-farmers Agri-Ordinances right from the date of its promulgation (June 5) till 13 of September 2020.

It is patently ridiculous on the part of Sukhbir Singh Badal to say on the floor of the Parliament, that he has not even read any of the three Bills. That perhaps speaks volumes of his bereft understanding apropos the basic knowledge of the parliamentary practice and procedures.

He should know that the Bills introduced in the Parliament, are exactly the same pieces of proposed legislation for which he and his party have been widely boasting and campaigning for more than three months, misleading the Punjab farmers, maintaining that the ‘Agri-Ordinances’ are farmer-friendly Ordinances.

Unfortunately the conscious awareness concerning the negativity of Agri-ordinances has occurred so suddenly to the sharp mental faculty of the SAD (Badal) leadership when it’s already too late to regret idiocies.

Farmers and the farming community in Punjab are publicly mourning their treacherous betrayal and they feel that they have been practically destroyed by the BJP and SAD (Badal).

Now it sounds like sheer comical nonsense to portray the last-minute course correction, the morality content of which no one is ready to believe. There is absolutely no use crying over spilt milk. The miserably salacious insinuations and the vested interests of the Badal family have served a last death blow to the farmers, leaving no hope for resurrection.

Thank you Badal family! Thank you BJP! Thank You NDA and Thank you Parliament for finalizing the destiny of the farmers of India, guaranteeing permanent slavery as a National salutation for making the poor country Self-Sufficient Nation and also for the immense contribution to the food basket of India.