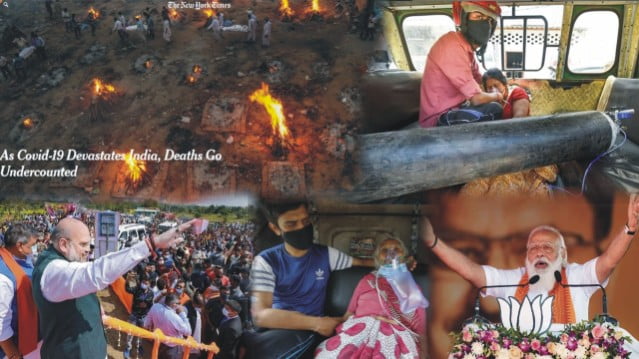 It is time for the governments to reach out to the people.

INDIA is currently undergoing through a period of national emergency and the worst medical crisis in a century.

We are still not aware of the exact magnitude of the problem or when will it end but it surely is one of the most difficult times we are passing through but the government appears missing in action.

We have already lost over two lakh citizens which is ten times more than all the soldiers who had made supreme sacrifice during all the wars we have fought since the independence.

The daily death toll is worse than the number of persons who lost their lives in the 9/11 attack on the United States in 2001.

There are about 30 lakh active cases of covid in the country as per official figures. The actual figures are believed to be much higher.

The country has passed through some other difficult times in the past like those caused by natural disasters but never in the past one has seen the government missing in action.

It appears the people have been left to fend for themselves. There is no control room or a centralised information centre to monitor and to guide the needy for basic requirements like hospital beds, oxygen and medicines.

Photographs and videos of the attendants of covid patients running from pillar to post to look for hospital beds, cylinders of oxygen and even basic medicines are common place.

It is so heart rendering to see visuals of those waiting for days to cremate or bury their near and dear ones because of the overload on crematoriums and burial grounds.

There is hardly any government agency available to guide such attendants and to provide any kind of relief.

No officials have been designated to deal with those in need and to see what help could be provided to them. Nodal officers to deal with the availability of hospital beds or medicines or oxygen cylinders should have been appointed at least in the worst affected districts.

Media has been reporting about people groping in the dark, attendants taking their patients from one hospital to another or trying to arrange oxygen cylinders from far off places and often at a very high price.

Evidently there are people who are making the most of the crisis to make profits and who deserve severest condemnation.

There are reports of ambulance drivers charging several times high to transport patients to hospitals or those hoarding medicines to make a quick buck. The government must take action against such anti social elements with a heavy hand.

Of course there are many kind hearted individuals and non governmental organisations which have held out a helping hand in these difficult times.

Their efforts must be applauded and its the duty of each one of us to extend whatever help we can provide in this difficult period.

These individuals and organisations had played a stellar role even during the first wave of covid pandemic last year.

There is another category of professionals who deserve all our support and gratitude. These are the doctors and para medical staff who have been stretched too much to meet the flood of demand.

Many of them have been functioning from 14 to 18 hours a day without any break to look after the growing number of patients. Some of them have actually suffered mental breakdown and need all our moral support.

A recent incident in Delhi where attendants of a patient are seen beating up doctors and para medical staff was most unfortunate and the authorities must take quick and strict action against such culprits.

It is time for the governments to reach out to the people. Prime minister Narendra Modi had addressed the nation over half a dozen times during the first wave of the pandemic but has made only one lacklustre national appearance this time.

It’s not only him, the other senior leaders including the chief ministers must also reach out to the people at this crucial juncture.

They must, however, not come out with false claims like those made out recently by the Uttar Pradesh chief minister Yogi Adityanath who falsely claimed that there was no shortage of beds or oxygen in his state.

The videos of the affected persons from the ground had debunked his claims and eroded the government’s credibility. 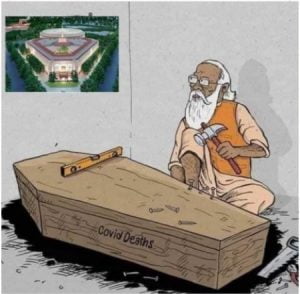 While a section of the media is doing a good job by exposing the ground reality and keeping the government on its toes, the same can’t be said about other institutions in the country like the judiciary, the election commission and the executive.

Undoubtedly it is time for everyone to join hands and contribute towards steering the nation back from the brink where it finds itself currently. All hands on the deck is the approach we need to ride over this situation.

Also Read: The Guardian view on Modi’s mistakes: A Pandemic That Is Out Of Control