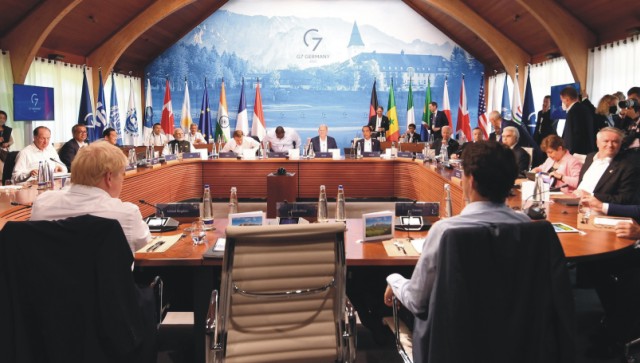 Within a week two strong messages have emanated from the two sparring world powers, aimed at controlling the world or realigning the current global order.

US President Joe Biden on 26 June and the Chinese President Xi Jinping on 23 June have announced two new global initiatives at BRICS and G7 Summits, respectively.

Last week in his address on 22 June at the 25th St. Petersburg International Economic Forum and the next day, on 23 June at BRICS Summit in Beijing, the Chinese President Xi Jinping stressed the need to forge greater synergy amongst countries for greater international development and close the development gap, by pooling resources, platforms and networks of development partnerships.

Noting that the international community is keen to achieve more equitable, sustainable and secure development, Xi said it is important to seize opportunities, meet challenges head-on, and work on the implementation of the ‘Global Development Initiative’ (GDI) to build a shared future of peace and prosperity. The Chinese president proposed the GDI in his speech to the 76th Session of the UNGA in September last year. The plan charts a course for international development, based on China’s goals and priorities.

Meanwhile at the recent G7 Summit at Schloss Elmau in the Bavarian Alps, Germany, President Biden on 26 June relaunched his initiative to provide infrastructure funds to poor and developing countries only a year after a largely similar scheme was unveiled at the G7 conference in Cornwall last July under the label ‘Build Back Better World’.

The fund was relaunched at the start of the G7 in Germany on Sunday as the ‘Global Investment and Infrastructure Partnership’. The avowed aim of this initiative is to become an alternative to the Chinese belt and road initiative (BRI) that Beijing has used for more than a decade to expand its economic ties and influence with developing countries.

The partnership aims to generate $600 bn of private and public funds by 2027, with $200 bn over the next five years coming from the US.

Projects cited at the event include a secure sub-sea cable linking Europe and south-east Asia, an industrial MRNA vaccine plant in Senegal, solar projects in Angola, a modular nuclear reactor plant in Romania and a port linking Christmas Island with the rest of the world.

However, up until now, little has been heard of ‘Build Back Better World’ since last year, while in January the EU launched its own infrastructure fund for developing countries, called the ‘Global Gateway’, aiming to mobilise €300billion ($53 billion) in investments between 2021 and 2027.

Initially, EU declared that this fund would work alongside ‘Build Back Better World’, and not be a rival. The UK, outside the EU, launched its own infrastructure project called the ‘Clean Green Initiative’. There are reports that Japan is planning to raise $65 bn over the same period for regional connectivity, though this fund/project has not been christened, yet.

All these various funds, though uniquely targeted against China have just created confusion for the politicos and the common man alike. Perhaps realising this Olaf Scholz, the German chancellor in his speech on 26 June, implicitly acknowledged the confusion, saying there were advantages if the G7 countries showcased their offers under a common roof.

It is reported that Biden, the European Commission president, Ursula von der Leyen, and the UK Prime Minister, Boris Johnson, met in November at Cop26 in Glasgow to evaluate their differing projects, and whether by duplicating their efforts they were weakening what they were offering to poor countries. However, it does not appear from the statements that the funds are being fully merged into one funding stream, but instead are being more closely coordinated.

The Guardian quoted Jake Sullivan, the US national security adviser and an important member of the project, saying at an event hosted by the Centre for a New American Security last week that the US-initiated partnership will cover global infrastructure, physical health and digital infrastructure and will provide “an alternative to what the Chinese are offering”. “We intend for this to be one of the hallmarks of the Biden administration foreign policy over the remainder of his tenure,” he said.

On its part China has criticised the initiative as based on a “zero-sum game approach.” The Chinese foreign ministry spokesperson, Wang Wenbin, said the relevant initiative from the US side ignores the desire of all countries for common development and win-win cooperation.

Though the avowed aim of the G7 Summit was to discuss, among other issues, the war in Ukraine and ways to stabilise energy markets and lessen dependence on Russian gas and oil, the announcements made seems very little, apart from moral support to Ukraine.

The G7 leaders heard the Ukrainian President Volodymyr Zelensky and promised him more arms, four of the G7 nations moved to ban imports of Russian gold from 26 June onwards to tighten the sanction squeeze on Moscow and cut off its means of financing the invasion of Ukraine.

However, metal analysts say this may not have a bearing on the international prices of gold, as they have held the same level since May last year. This follows reports that oil my move up again, and in this background the stalled Vienna talks might be resumed to ensure flow of Iranian oil in the market.

The common denominator at these two high-level summits was the presence of the Indian Prime Minister Narendra Modi. This underlines the importance, which both China and the US attach to India currently.

It is majorly due to its independent and realistic foreign policy, that the Chinese Foreign Minister Wang Yi praised India for calling out the West at the GlobSec 2022 Bratislava Forum, earlier this month, where Foreign Minister S. Jaishankar had said that New Delhi and Beijing can manage their bilateral relationship on their own, and stressed the need for the world to come out of its Euro-centric mindset.

India so far, has neither endorsed the Chinese president’s GPI nor has commented so far on Biden’s new initiative.

It continues to pursue a completely independent international foreign and trade policy and due to its geo-political and economic importance, and its unwavering stand has endeared it to both the blocs, and both seem to be courting it seriously.

Meanwhile, on 28 June, the US announced a new alliance for the Pacific including Australia, Japan, New Zealand and the UK to boost economic and security ties with the Pacific island nations.

Also, on the heel of the G7 summit, the NATO summit, to be held in Madrid this week, will for the first time include the top leaders of four Asia-Pacific countries, Japan, South Korea, Australia and New Zealand, and also for the first time, the bloc will identity China in its new strategic concept, a key document on NATO’s future security trial and military development will be adopted at the summit.

This underlines India’s central role in the new thrust for the Indo-Pacific by the western nations led by the US and if India plays its cards well, it could translate into benefits for the country in both defence and economic & trade areas.