Kangana Ranaut: How and When India Got Freedom? 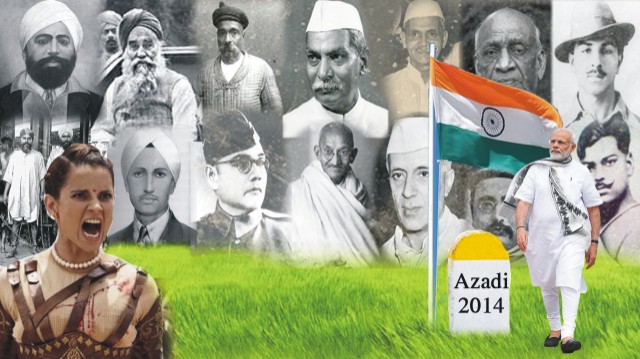 As sectarian nationalism is becoming more assertive and dominant the narrative about our freedom struggle and how we got freedom are being twisted to suit the currently surging religious nationalism. So far communalism was constructed by the communal vision of medieval history in particular.

To add on to that now the narrations related to the period of freedom movement are being distorted to undermine the freedom movement on one hand and to glorify those who kept themselves aloof from the process of ‘India’s making into a nation’ and its ‘struggle for freedom’ from clutches of the British powers. 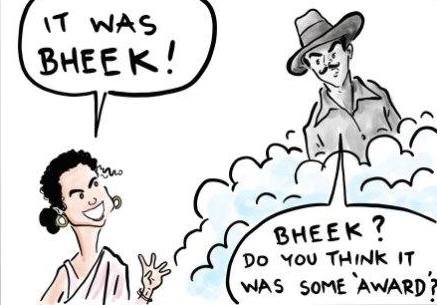 Kangana Ranaut, whose leanings toward right wing sectarian nationalism are written on her sleeves and whose twitter account has been permanently blocked for spreading hate, stated during a television interview, “…India attained freedom in 2014 when Prime Minister Narendra Modi came to power.”

She described the country’s independence in 1947 as ‘bheek.’ (Alms). It is not just a question of her level of knowledge about how India became a nation and how freedom struggle spanning over for several decades led to our Independence, but her statement is as such a part of the new narrative which is systematically being constructed and coming to the fore from last several decades in general and last few years in particular.

As such India getting real independence in 2014 is a further modification of what Modi’s own formulation was. 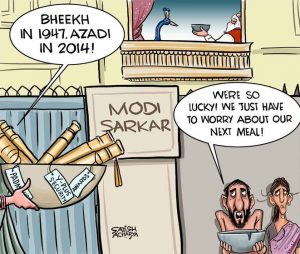 When he came to power in 2014 he stated, that 1200 Yrs of servitude is coming to an end, meaning that not only that the colonial period was a period of slavery the period when in some regions of India Muslims kings were ruling was also a period of slavery and now Hindu Nationalism is back!

As the religious nationalists were not the part of freedom struggle they are operating at multiple levels to gain legitimacy as nationalists.

At one level there are claims that quit India movement got its strength due to participation of RSS as its ideologue Rakesh Sinha points out,

“In August that year, in Chimur and Ashti, RSS cadre dominated Congress processions and attacked police stations, with police in these talukas coming forth with the severest repression of the people. Those hanged and awarded life imprisonment were mostly RSS volunteers.”

And puts his fantasy on paper

This is in total variance from what RSS chief Golwalkar instructed at that time, “In 1942 also there was a strong sentiment in the hearts of many. At that time too, routine work of Sangh continued. Sangh vowed not to do anything directly.” (Shri Guruji Samagra Darshan, vol. IV, page 40)

Some other ideologues of sectarian nationalism are now claiming that Gandhi led freedom movement had minimal role, quoting British PM Attlee statement published by the Institute of Historical Review in an article by Ranjan Borra in 1982. This is being presented as gospel truth contrary to the fact that ‘Quit India’ movement led by Gandhi had shaken the British Empire to no end.

One does not deny that multiple factors might have been at play in forcing British to leave India. Starting from First War of Independence led by Bahadur Shah Zafar, to revolutionary movement of Anusheelan Samiti and Hindustan Socialist Republican Association to Subhash Bose’s Azad Hind Fauj and Revolt of Royal India Navy in 1946, each much have contributed in the process. 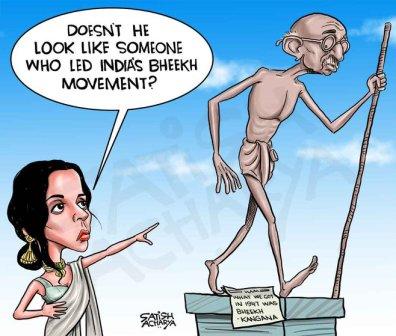 The undeniable fact is that freedom movement led by Gandhi was the one which was overarching and it roused people against British rule, taught the nation to be fearless and stand for the principles which led to the formulation of Indian Constitution. This movement incidentally has been the biggest ever mass movement in the World.

What is deliberately missing in the narrative of Right wing sectarian nationalists is that the freedom movement was not only struggling against British rule but was also at the same time was building the Indian Nation.

This is what led Surendra Nath Bannerjee to aptly say that ‘India is a nation in the making’.

This is the most profound phrase to describe the contribution of Gandhi, Nehru, Patel, Maulana Azad and their colleagues. Most of the revolutionaries (Surya Sen, Bhagat Singh) also believed in inclusive nationalism. Here Savarkar in his early phase was anti British revolutionary but later he did fall in the trap of communalism, based on exclusion of religious minorities. 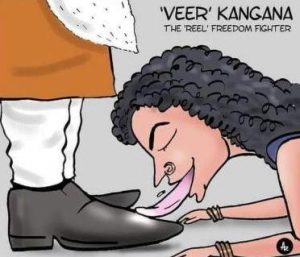 For Kangana Ranaut, heavily influenced by her role as Rani Laxmibai, says “…I know, but which war took place in 1947 I am not aware, if someone can bring to my awareness I will give back my PadmaShri and apologize also please help me with this.”

Presumably she thinks freedom is won through war and there was no such war in 1947. One cannot expect her to understand that our Indian nation came into be through the struggle against British.

The central, most important and crucial role of Indian people standing firmly with Gandhi and participating in Non Cooperation movement (!920), Civil Disobedience (1930) and Quit India movement(1942) brought us together in the bonds of fraternity with values of equality and aspiring for liberty.

Lamenting at what is happening in the new dispensation of which he is a part, MP Varun Gandhi wrote,

“Sometimes Mahatma Gandhi’s dedication and sacrifices are insulted, sometimes his killer is respected. And now lakhs of freedom fighters, from Shaheed Mangal Pandey to Rani Lakshmibai, Bhagat Singh, Chandra Shekhar Azad, and Netaji Subhas Chandra Bose, are being insulted. Should I call this thinking madness or treason?”

Who will answer this question? This in a way it sums up the arguments which are an apt response to Ranaut. But people who matter, the leadership of BJP-RSS will keep quiet on this blatant insult to our freedom fighters as this is precisely what they also believe.

They can speak in multiple tongues at the same time as in the aftermath of Gandhi murder on one side they were declaring mourning and on the other they were distributing sweets!