Freebies reduce the prospects of development and growth 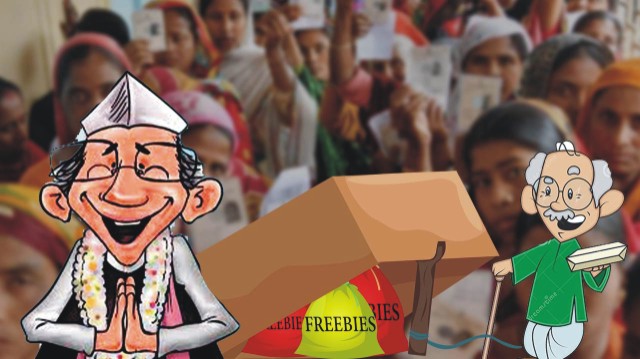 Populist schemes and freebies announced by political parties during assembly elections, can have serious consequences.

While political parties make all kinds of promises before elections, there is a growing and hazardous tendency of offering freebies to attract voters. All this is being done with the tax payers money for which the governments take the credit but the nation suffers. 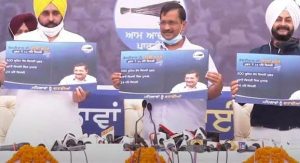 Thus instead of generating employment or providing soft loans for starting own cottage industry, political parties are offering Rs 1000 to Rs 2000 dole to all females. It amounts to giving alms rather than trying to make them self sufficient or to raise their dignity.

Among other offers are free electricity, water and even LPG cylinders. With cost of generating Electricity going up and most parts of the country facing huge power cuts, this promise does little to help the economy.

Instead liberal subsidies or long term loans could be provided to set up solar power units.

Likewise free food-grains should be provided during times of calamity but to extend such a scheme when normalcy is restored is unjustified. The beneficiaries should be made to do some work for nation building rather than turning them into beggars. Of course there should be provision of free food for the infirm or the elderly who can’t work.

This issue was flagged by senior bureaucrats to prime minister Narendra Modi recently. These officers, who were called by the prime minister to discuss challenges faced by the country, pointed out that populist schemes and freebies announced by political parties during assembly elections, can have serious consequences. 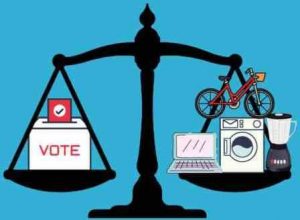 Some of them even went to the extent of warning that some of the states could be heading the way of cash-starved Sri Lanka or Greece if the trend remained unchecked.

They stressed that some of the announcements and schemes in several states were economically unsustainable taking into account the poor economic status of these states.

Punjab, for instance, is under a debt of Rs three lakh crore and has the dubious distinction of being the most indebted state in the country. Of course it is partly due to the long period of militancy but the various governments in the state have done little to improve the economy of the state. Instead there is competitive tendency to offer freebies.

It is not just Punjab, but states like West Bengal, Andhra Pradesh, Telangana, Uttar Pradesh and Bihar too have been burdening the state exchequer with such doles.

The tendency obviously limits the ability of state governments to allocate more funds for crucial social sectors such as health and education.

The senior officers who briefed the prime minister said this trend of competition among political outfits to offer freebies before every election will have serious repercussions on state and central government finances in the long run. The meeting was also attended by National Security Advisor Ajit Doval, Principal Secretary to Prime Minister PK Mishra and Cabinet Secretary Rajiv Gauba along with other top bureaucrats of the Union government.

It was pointed out that while the states get a share of central taxes and GST, their own sources of revenue are limited to excise on alcohol and VAT on petrol in addition to receipts from property and motor vehicle registration. Offering freebies out of these limited resources further reduces the prospects of development and growth.

Lessons need to be taken from the economic crisis being currently faced by Sri Lanka. It is currently experiencing its worst economic crisis with long queues for fuel, cooking gas and other essentials and even prices of vegetables and food grains becoming unaffordable leading to mass unrest in the country.

Apart from the setback it received during Covid19 pandemic to its tourism industry – which was its main source of revenue – poor financial management over the years has put the country under heavy debt. So much so that it is being forced to borrow more to just pay off its debt. Several countries and international monetary agencies have declined to provide it more loans leading to its inability to import essential commodities.