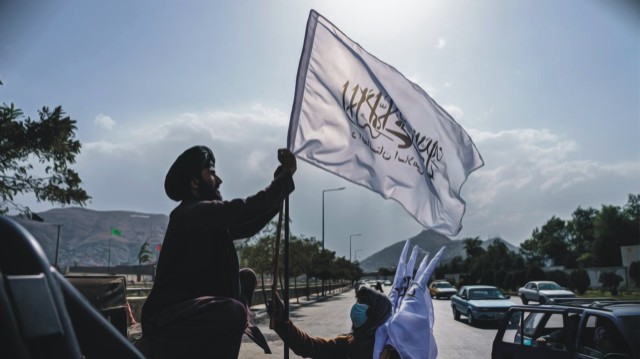 What is the significance of the white flag of the Taliban?

We should not ignore the color of the flag of any outfit as flags sometimes represent a larger purpose. For example, ISIS used the black flag, and it was not without a sense. But what is the significance of the white flag of the Taliban? To understand deeper, let us know the colors of different flags in the Islamic world.

𝐁𝐥𝐚𝐜𝐤 -The Rashidun Caliphate and the Abbasid Caliphate

The flag change in Afghanistan is not new, and it has changed 30 times in nearly 100 years. But for the Taliban, this is not the first time the white flag is being used. During the previous tenure (1996 – 2001), the Taliban used the same white flag.

In the center of the flag, you can find Shahadah. It says in Arabic- “𝐿𝑎𝑖𝑙𝑎ℎ𝑎𝑖𝑙𝑙𝑎𝑙𝑙𝑎ℎ, 𝑀𝑢ℎ𝑎𝑚𝑚𝑎𝑑𝑢𝑟𝑅𝑎𝑠𝑢𝑙𝑢𝑙𝑙𝑎ℎ”. Shahadah is an Islamic oath, one of the Five Pillars of Islam and part of the Adhan.

The conflict of flags has been an exciting factor. Historically, the Islamic State led by Abu Bakr Al Baghdadi used a black flag with Shahadah in the middle. Islamic state’s black flag is significant because it was the color prophet used to identify his army during the war. It was never a symbolism for anything else.

Mention of the Black flag in Hadith in one of the predictions (2269), which says, “Armies carrying black flags will come from Khurasan, no power will be able to stop them, and they will finally reach Eela (the al-Aqsa Mosque in Jerusalem) where they will erect their flags.”

This prediction became popular in the Jihadi network, especially with Al Qaida, a significant component of ISIS.

There is a conflict between ISIS and the Taliban, and the Taliban played a role in driving out ISIS from Afghanistan. Mullah Omar at some point asked Osama Bin Laden to leave Afghanistan and even asked him to sit on the floor.

Can we say The Umayyad Caliphate inspires Afghanistan’s flag? I have little reason to believe that the Saudi Arabian flag, which has the same look and feel except the green color is inspired by Fatimid caliphate for obvious reasons.

Green is the color of Islam. Islamic emirates will not always be guided or subscribe to historical Caliphates.

Besides, Afghanistan had a very choppy past and even in medieval period, there were many from Sasanians, Abbasids and others have tried to rule but not for long. Hence white color of the flag raises more questions than answers.

Since I could not establish the connection between the Caliphate and the Color of the Flag used by the Taliban, I decided to understand the significance of colors in Islam to understand if they are connected –

Using these color codes and their meanings, I cannot decode the meaning or purpose of the Taliban flag. It will be hard to consume that Taliban aspires for purity and peace given its track record. It appears that it does not have any significant purpose or thinking behind it, but any changes to this flag in the future may come as an afterthought and signify some intention.