Farmers’ protests: Potentially explosive situation building up with prolonged stalemate over the issue 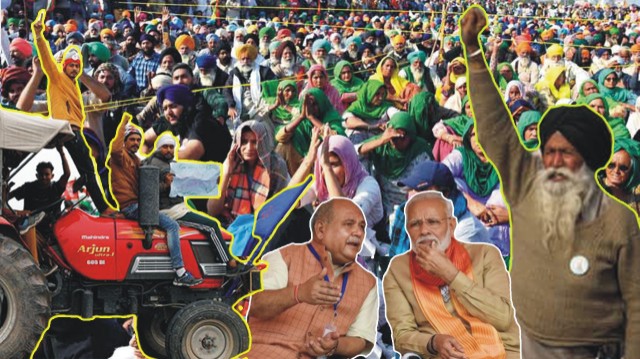 Govt must realise that the farmers are not country’s enemies and need to be treated as family members.

After 11 rounds of talks between the central government and representatives of farmers failed to achieve any breakthrough, there has been no further development except the prime minister saying the government was merely a call away but making no further move to reach out to the farmers.

Their leaders say the stalemate continues because they don’t have faith left in the union agriculture minister and don’t know how to reach the prime minister.

It’s been nearly three months that lakhs of farmers and their supporters have been camping on Delhi borders to protest against the three controversial farm bills.

They have braved the harsh cold conditions under temporary shelters and over 250 have reportedly died since the protest began from November 30.

The inordinate delay in resolving the issue with the farmers adamant on withdrawal of the laws and guarantee for minimum support price and the government declining the demand while assuring that the MSP would continue, is leading to a potentially explosive situation with long term consequences.

Evidently those braving the cold and the might of the state machinery, which has done its best to cut off water and electricity supply as well as wifi over long periods, are not likely to forget the hardships all their lives.

Without going into the merits of demands or otherwise in this article, which have already been debated in the past, this writer would strongly urge both the sides to give up the extreme positions taken by them and not let the situation drag any longer. Any such movement carries the potential of a section of the protesters, invariably egged on by outside powers with ulterior notices, to exploit the situation.

We all saw the unfortunate and condemnable actions at the Red Fort on the Republic Day.

The claims and counter claims about who was behind the acts is debatable but the point that needs to be underlined is that prolonged agitations are prone to be misused by vested interests and there is also ways a chance of some people losing patience.

The Modi government is perhaps afraid that any further climb down by it would damage its image of a “tough government”. After all it had carried through several pending issues like Ayodhya dispute, Jammu and Kashmir, CAA and even actions like demonetisation and hasty roll out of the GST with a heavy hand.

Also Read: Godi Media, what was wrong in hoisting the Nishan Saheb on Red Fort?

However it must realise that the farmers are not country’s enemies and need to be treated as family members.

Moreover the significance and contribution of these farmers is disproportionate to their population both is the fields of agriculture and defence.

The government must also not disregard the culture, history and ethos of the farmers from the region, particularly the Sikhs, who are known for being generous to a fault and for making extreme sacrifices.

The farmers too need to introspect and see whether lakhs should continue to brave the conditions or some middle path could be found to end the stalemate. One problem with the farmers reaching a consensus is the lack of clear leadership.

With over two dozen organisations and nearly 40 leaders involved in the talks, it was certainly very difficult to arrive at any agreement. Thus even when a section of leaders were agreeable to the centre’s offer for suspension of laws, the others put their foot down.

Before the situation deteriorates and unscrupulous elements attempt to fish in troubled waters, it is important for both the sides to bury the hatchet and find a way out.

With even the chief trouble shooter of the government Amit Shah failing to resolve the issue, the only option left with the government is a direct initiative by none other than prime minister Narendra Modi himself.

He must show statesmanship and not stand on prestige. Similarly farmer leaders must also go with a positive attitude for an amicable way out.

Even though the mainstream media is showing signs of fatigue in giving due coverage to the protests, the prolonged stalemate is causing long term damage to the country is many ways. It is in everyone’s interest to resolve the issues without any further delay.

When a Government is Rattled by Twitter posts, Toolkits and ....