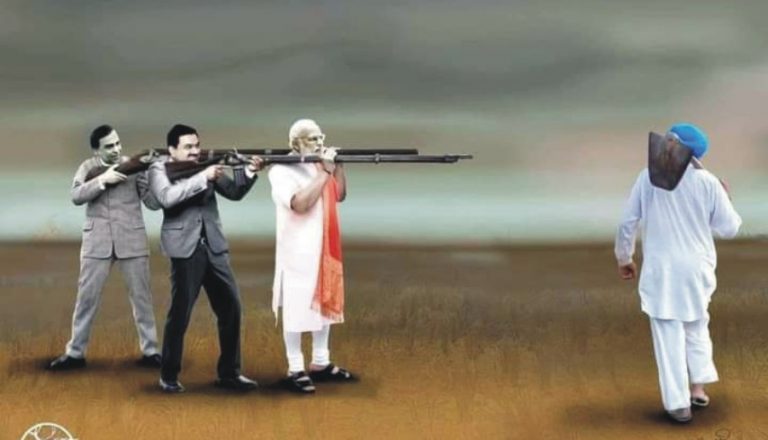 Farmer leaders have steadily been losing their strength to convince protesters on less than the withdrawal of the Acts.

ENLARGED farmers’ protests at Delhi that succeeded in mustering active support from adjoining states have forced the Modi government to leave its earlier stand that the Farm Act would bring ‘bonanza’ for the farmers. And in a way of confessing its error, the government has come down with a negotiating proposal for amending the Acts.

But by exhibiting trust-deficit in the government proposal, the farmer leaders spurned the official move resulting in deadlocking of the next sixth round of the latter’s talk with the Central ministers.

The protesters have become rather more firm in their resolve not to accept anything less than withdrawal of three Acts. A striking aspect is: the farmer leaders who were ready for a negotiated settlement a week ago are no longer in a position to push through any agreed solution among the protesters, now swelled in thousands.

The post-Independence experience of Left and Right parties’ leaders struggling for people’s demands and rights in Punjab and other states is quite bitter.

The farmer leaders do not mince words in saying that the governments would never honor the negotiated settlements and use such eventuality only to puncture their protests. Therefore, they want ‘yes’ or ‘no’ from the government side.

With the option of negotiated settlements receding, the government is left with two options. One is the withdrawal of the Acts and re-enact them after the inclusions of all pros and cons.

And second, using ‘tested’ tools like dividing the protesting leaders and evicting them with the use of force. But the second option could boomerang and is fraught with serious political implications.

So far, attempts by the pliant media to paint the protests as– Congress or Opposition inspired, a Khalistani upsurge and the rich-farmers’ propelled campaign– all have failed to stick.

Interestingly, a long historically whipped up and politically blown up ‘animosity’ over the unresolved dispute of river-water sharing between Punjab and Haryana has visibly eclipsed. And Haryana farmers have joined the Punjab farmers camping at Delhi borders in a big way.

Support for the farmer protests has been increasing day by day which has also strengthened the protesters’ will to withstand the chilling weather and cold nights in the open.

On the other hand, following the inconclusive informal talks with Home Minister Amit Shah, the farmer leaders announced a further intensification of their agitation by organizing sit-ins at Reliance business outlets and toll plazas besides blocking the Jaipur-Delhi highway from 12 December.

By choosing the corporate-run business as a target of the protest, the farmer agitation has sharpened its sting against neo-liberalism. Also, the protesters seek to highlight the nexus between the Modi government and corporates.

The neo-liberal policies have already led to the finance-capital control and privatization of health and education sectors which have brought untold miseries and hardships to a majority of the Indian people.

Besides that, the acute distresses- one after the other- caused by the abrupt demonetization, imposing GST and lockdowns in the wake of the Covid-19 pandemic have further added up to the people’s woes. Anguish and angst thus got piled up now visibly backing up the farmer protests.

An assortment of economists and columnists prodding up Prime Minister Modi to take hard decisions like that of Margret Thatcher and push through ‘reforms’ in the agriculture sector.

Already following neo-liberal policies the Modi government surreptitiously enacted Farm Ordinances in June this year to be converted into Farm Acts in Parliament after three months.

In the name of ‘reforms’, the Acts would deliver death blows to the regulated farm markets, known as APMC marketing yards. They would provide free access to agri-business corporations which, using their money power would control and manipulate farm produce markets to maximize their profits.

Succumbing to the pressure of World Trade Organization (WTO) earlier UPA government also toyed with the idea of dismantling the APMC regulated mandi system and doing away with wheat and rice procurement at Minimum Support Price (MSP).

But the UPA regime was wary of projecting itself ‘a firmest decision-maker and quick deliverer’ like that of Prime Minister Modi. Accustomed to give a sort of ‘shock therapy’ by his sudden decisions thereby to bamboozle the people at the receiving end, the PM chose lockdown period to issue the farm Ordinances and enacting of the Acts thereafter.

The Acts would deliver systemic destruction of the agriculture sector which sustains nearly 60 percent population.

The agri-business is not interested in food security and use the farmland as ‘financial assets’. They would uproot the farmers, 86 percent of them are in small and marginal category thereby replacing the local agriculture with industrial and export-oriented model.

And that would finally lead to degradation of soil, poisoning of water with excessive use of pesticides, and destruction of the environment.

Farmer leaders are vocal enough in conveying that they are now facing ‘existential threat’ with powerful agri-business corporation out to monopolize the farm produce markets.

Three Farm Acts plus amended Electricity Laws form a consummate recipe for the liberalization of the agriculture sector. India cannot pursue the old economic paradigm that the demise of agriculture is a must for the progress of the country. Such flawed thinking ruled when environmental problems did not come to the fore.

Now sustainable agriculture is the need of the hour to take care of a diversified economy, better ecology, and equitable society.

Even otherwise the agriculture cannot survive even in developed countries without the State subsidy or support.

How India could follow the neo-liberal policies in the farming sector since its industrial and service sectors are too small and inefficient to accommodate the working hands likely to be rendered idle with the operation of agri-business corporates and private players in seed and other input areas. Already rural areas have lagged behind in development as achieved by the urban ones.

The farmer protests have reached a critical juncture now. The government is out to use all tricks to see protesters upstaged and cowdowned.

On the other side, farmer leaders have steadily been losing their strength to convince protesters on less than the withdrawal of the Acts. They have to intensify the protests to keep their flock together. Fingers are crossed at the moment, anything could happen. But Indian polity would not be the same thereafter.

Also Read: A Punjab In Negotiation – What Did We Get?

Writer is a senior journalist.

PrevPreviousA Punjab in negotiation: what did we get?
NextWe Are The ‘Samaj’ – The Damsels of Singhu/Tikri BorderNext
Author Related Post
Related Post

Candidates with criminal background - Not Untouchable For Political Parties....