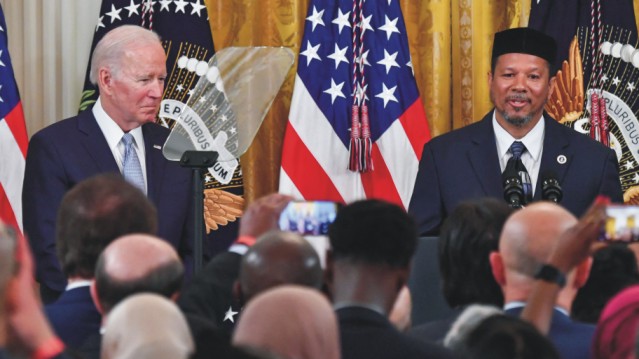 Let us hope India will learn President Joe Biden’s Eid message and implement it in India for peace and togetherness.

President Joe Biden’s decision to reinstate Eid celebrations in the White House is of great significance and huge step forward towards respecting otherness of others. The restoration is commendable in many respects: it strives to increase citizens’ sense of belonging, inclusivity and pluralism.

But can we ever expect from Indian Prime Minister Narendra Modi to reciprocate the same gesture of respect for Muslims. In India, Eid festival can be used to preach the message of brotherhood, togetherness, reinforcing the slogan of unity in diversity?

Biden’s Eid message has great connotation for the United States and the rest of the world, especially for India, where Muslims, in particular, and minorities in general, are being constantly attacked and subjected to hate and violence.

Despite possessing constitutional rights and protection for religious freedom, equality, the space for Muslims is shrinking by the day. These days the culture of instant justice with bulldozer aims to bulldoze the well-being of minorities.

Biden during Eid celebration at the White House had said, “One of the promises I made when I ran for office is that to restore the Eid celebration, because it’s very important. I’m incredibly proud to have nominated the first Muslim American ever confirmed to the federal bench. And I’ve appointed the first Muslim to serve as Ambassador-at-Large for International Religious Freedom. And it’s especially important because today, around the world, we’re seeing so many Muslims being targeted with violence. No one should discriminate against oppressed or be oppressed for their religious beliefs.”

He added, “Indeed, America’s prosperity can be attributed to inclusion.When you feel included, you feel secure, and when you are secure and free from tensions, your creativity comes into full play. You become an extraordinary contributor to the Nations growth and wealth. The more people we include, the closer we get to being a perfect union.”

On the meaning of Biden’s Eid message to India, he said, “Prime Minister Modi can work on bringing his superb rhetoric to fruition. We applaud President Biden for hiring a professor to teach him about Islam. I sincerely hope he has taken the time to learn about other religions. Certainly, if we can learn to respect the otherness of the others, then conflicts will fade away and viable solutions will emerge.Indian Muslims and all other Indians in the Diaspora want their Motherland to be an example of Inclusion and Pluralism for other nations to follow.”

According to Mujibur Rehman, assistant professor at the Centre for the Study of Social Exclusion and Inclusive Policy, at Jamia Millia Islamia, who is apolitical scientist by training and his area of research is identity and development politics, “America is becoming a more and more multi religious country…by reaching out to Muslims it is seeking to expand its social reach and presenting evidence of its practice of religious freedom. Some sections of Indian leadership have become majoritarian in their approach. By keeping silent they want to stay out of evidence of old association with such rituals. This is very undignified when a leader fails to reach out to a community on an important festive day which presents the opportunity to explore more active forms of religious reconciliation and brotherhood.”

John Dayal, noted social and human rights activist said, “Arguably, the messages of Pope Francis from Rome and US President Joe Biden from Washington are the most comprehensive calls for an end to islamophobia across the globe. Joe Biden, a practicing Catholic himself, in his official message had a special word of solidarity with the millions of displaced persons and refugees around the globe who had spent these sacred holiday separated from their families and were unsure of their future, but still hoping for a brighter tomorrow.

“Biden gave America’s assurance of always keeping faith with those seeking a better life. When Muslims across the United States were celebrating Eid, he said, “Let us renew our dedication to our foundational commitment to respecting all faiths and beliefs.”

Recalling that the Holy Qur’an urges people to stand firmly for justice, “we will continue to work with Americans of all beliefs and backgrounds to safeguard and deepen our collective commitment to this fundamental principle. This year, we have resumed the tradition of celebrating Eid at the White House”, he added.

Dayal added, “Addressed ‘To Muslims throughout the World,’ the message of Pope Francis was also an important call to action for peace and tolerance as he proposed reflection on the theme, ‘Promoting Mutual Respect through Education.’ As sectarian and religious tensions continue worldwide, the Pope emphasized the importance of respect and need to educate Muslim and Christian youth in a tolerant and loving manner, Vatican observers noted. He said, ‘We all know that mutual respect is fundamental in any human relationship, especially among people who profess religious belief. In this way, sincere and lasting friendship can grow.’”

“Unfortunately, Indian political leaders have not learned to go beyond the ritual obligation of a message. Prime Minister Narendra Modi’s message in the form of a Tweet, said “Best wishes on Eid-ul-Fitr. May this auspicious occasion enhance the spirit of togetherness and brotherhood in our society? May everyone be blessed with good health and prosperity?”Prosperity is fine and important in the aspirational world of India. Many of our own festivals are closely connected with gold, other precious metal, wealth and prosperity,” said Dayal.

Let us hope India will learn President Joe Biden’s Eid message and implement it in India for peace and togetherness, for pluralism next year on Eid day celebration and display our unity in diversity for which India is known in the entire world.