Economy Contraction: Do Not Blame Everything on the Pandemic 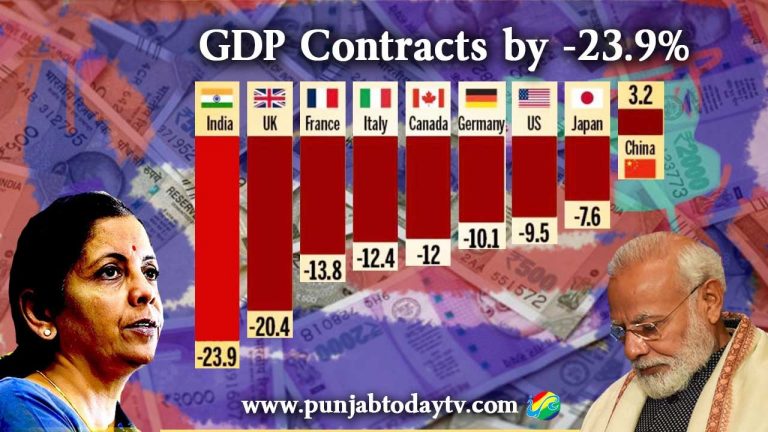 Economy contraction – Acknowledge the blunder, assign the responsibility, before you set out to even correct it.

India’s Gross Domestic Product contracted by -23.9 per cent in the April-June 2020. This is the largest contraction since India started reporting quarterly economic status in 1996.

The Finance Minister blamed the fall on ‘Act of God‘. However, since certainly God is not partisan, other countries too should have reported similar economic figures. But that is not the case.

India lags behind US whose economy contracted by -32.9 per cent. UK reports -20.4, France -13.8, Italy -12.4, Canada -12, Germany -10.1, Japan -7.6 and China’s GDP actually rose by 3.2 per cent. The reason for the economic devastation is not the pandemic alone but actually how different countries handled the pandemic.

If you look at the figure in greater detail, the numbers are even more scary. In India, Manufacturing went down by -39.3, Mining by -23.3, Electricity by -7, Public Administration by -10, Hotels by -47, Construction by -50, Private Consumption by -27, Gross Fixed Capital Formation by -52.9, and the only sector that posted a growth is agriculture +3.4 per cent.

However, we cannot take even these figures on face value. For example, look at Hotels. The whole sector was closed April and May, yet their fall is -47 per cent when a more realistic figure would be -75 per cent.

In any case, the whole contraction goes down to one single decision: the sudden, ad hoc, absolutely binding lockdown we imposed in the end of March until May when the pandemic was not as severe in the nation. The longest lockdown in the world led to a massive migrant worker exodus. Around 2.2-3 crore people moved back to their native villages which is double the displacement during the greatest exile in human history, the Partition of India and Pakistan.

The lockdown is rendered even more meaningless when these days the daily case load is above 75,000, we have over 37 lakh total cases now and have had over 65,000 deaths – most of them in July and August. Yet, pushing the catastrophe, the government keeps trying to open the economy through Unlock 1, 2, 3 and 4. This is utter and gross mismanagement.

But the reasons are deeper.

We know how the government keeps pushing crony capitalism – inviting foreign players to invest in key sectors, selling away nationalised Public Sector industries and even railways. The last bastion in this fight is India’s informal economy estimated at around 60 per cent of the national GDP and employing over 85 per cent of the nation’s population.

When economic recession hit the world in 2009, it was this sector that prevented India from tumbling down. India escaped that recession relatively unscathed.

However, the demonetization of November 2016, the ill structured Good and Service Tax program of July 2017 have already wreaked havoc in the informal sector. Millions have lost jobs; lakhs of businesses have wound up. With additional estimated 2 crore job loss during the pandemic, it is this informal sector that has been most vulnerable to the vagaries of the government’s bad decisions.

This is the plan: turn the nation into a basket economy and allow private players to buy up everything. This perpetuation of crass and brutal crony capitalism will be the legacy of this government in the history of the nation.

Amidst all this, given that the only growth was in agriculture, Punjab being an agrarian state has once again lived up to its role in the nation’s economy. The way Punjab managed the wheat harvest has secured the nation from a food crisis for another three years – provided the government can distribute grain justly to the nation in the coming months. Yet, the new ordinances passed by the government – encouraging private players – will soon devastate even Punjab.

As far as GST goes, with the Centre not willing to part with money already collected in the past quarter, Punjab suffers once again. As the nation spirals down, states like Punjab will have to think about surviving more than ever earlier.

Meanwhile, blame the GDP fall not on the pandemic but on how poorly the government managed the crises. Acknowledge the blunder, assign the responsibility, before you set out to even correct it.