With focus on Ayodhya and Kashmir, US $5 trillion economy a far cry 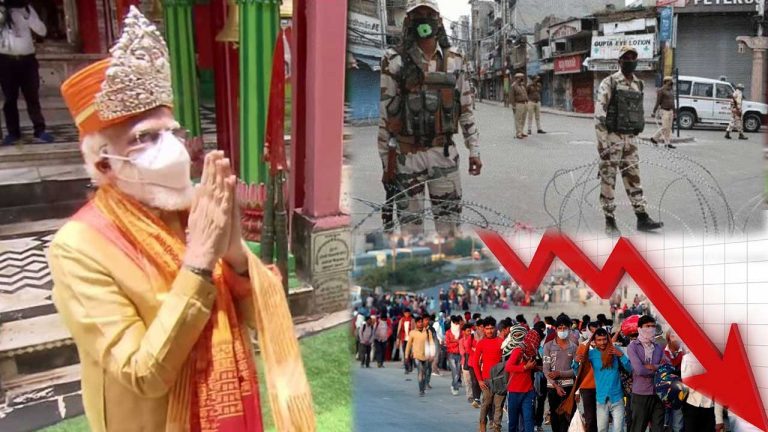 It’s been four months since India witnessed lakhs of migrant labourers trudging back to their homes hundreds of miles away either on foot or in packed vehicles. Later government too provided special trains to ferry them home. Those memories would forever remain etched in our collective consciousness.

The latest MANREGA data is an eye opener. It shows extreme distress among the country’s poor. During June, when agricultural operations also provide ample jobs, the figures reveal that 62 million people lined up for work which is given on the minimum wages and that too for a maximum of hundred days in a year. This figure is thrice the usual number during this period of the year.

It is evident that the displaced migrants are finding no jobs in their states and are desperate to get jobs to make both ends meet.

While a section of the migrants have come back on their own, others have been contacted by their former employers and taken back with higher wages. There are also a couple of instances in which big and specialised companies, including the diamond cutting industry in Surat, had chartered aircrafts to bring them back.

All this has contributed to some recovery of the economy and there are green shoots which give some hope for faster than expected recovery. However it would be too early to call it a revival of economy. The predictions world-wide are bad and economists believe that 90 per cent of the countries would suffer from recession.

India can not remain unaffected. What would differentiate the countries is the extent of damage caused to their economies and for that much would depend on how governments handle the situation.

Though the government has released more funds and has provided cash relief besides extending the period of free or subsidised rations, clearly these steps are not enough. Extending cash relief at such disastrous times is justified but not for an extended period. For their own good and for the good of the country more employment opportunities shall have to be provided and one way to go further is to invest massively in building infrastructure.

The massive migration has brought home the truth that greater damage has been done to the economy where industry was concentrated, particularly in Maharashtra and Gujarat, while the maximum suffering and strain on resources has been in the states to which the maximum number of labour belong.

It is also clear that the industrialised states have much better infrastructure while the worst is in the other states. Clearly much more needs to be done to build infrastructure in such deprived areas by deploying more financial resources.

The Indian economy was already on a down slide before the pandemic struck the world. It’s growth rate which was hovering at about eight per cent was impacted by the twin steps of demonetisation and faulty roll out of the GDP.

The economy growth rate has plummeted to just one or two per cent after the Covid pandemic and there are predictions that it might go into negative growth. Even in the current situation, economists point out that for the first time the number of people falling below the poverty line may actually go up.

Former Prime Minister Dr Manmohan Singh, who is also an authority on economy, has said the most important requirement at this critical stage is to infuse “confidence back into the entire eco system”.

But, as I wrote above, there are green shoots coming up with the demand for electricity, goods and manufacturing picking up. Top international business houses including Amazon, Apple, Google have recently announced massive investments in India.

One reason behind their decision could be the China factor. Some of these businesses are moving out of China or don’t want to invest more in that country. Their option clearly is India with its massive consumption capacity. It now depends on us as to how we give them confidence and bring in the ease of business while keeping our interests at the foremost.

The government’s focus continues to remain on building Ayodhya temple and “integrating” Kashmir with the rest of the country. It is not paying enough attention to revive the economy.

PrevPreviousHow was Manmohan’s rule far better than Modi?
NextWhy is the media meddling in as Investigator, Judge, Jury and Executioner?Next
Author Related Post