Delhi Budget: Truth Behind the Myth of Revenue Surplus 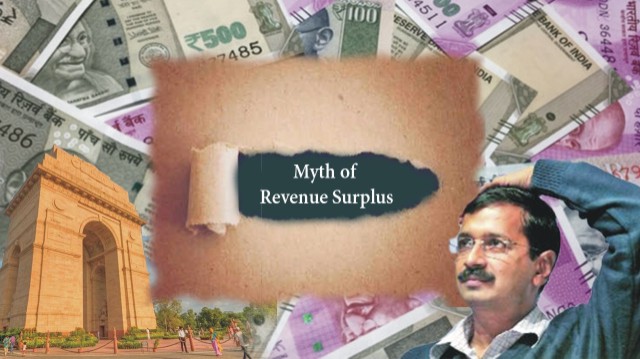 The Delhi budget has always had a revenue surplus for a long time now.

So, when did Delhi budget become revenue surplus?

The Delhi budget has always had a revenue surplus for a long time now. AAP government has inherited the legacy of excess from the previous government. In Fig 1, we can see the trend against %GSDP. We have tried to restrict it to 2019-20 to avoid the impact of the corona. However, the revenue surplus continues to decline.

Fig 1: Revenue Surplus trends of Delhi Government Budget as a percentage of GSDP


Is Revenue Surplus good or bad?

Governments are not corporates, and in a welfare state, they spend the money. Therefore, the Government intends to maximize investment for growth.

The surplus is used to reduce debt or invest in growth. The governments hence prioritize what exactly to be done. Do they increase the supply of money by investing or use the funds in servicing debt?

If the surplus arises from less spending, it is not a very healthy sign for the economy. This means the quality of life has been compromised. When the budget surplus comes from excess taxes, businesses are less profitable; they miss the opportunity to grow.

However, if it comes from better compliance, it means it is healthy. Therefore, one must be careful while advocating surplus as it may translate into both positive and negative impacts on the economy.

How do we see this from Delhi’s perspective?

The proof of pudding is in eating. If we look at how the economy in terms of GSDP growth, it has changed during the previous and current period, we can see some difference. The GSDP growth has slowed down during the AAP regime, though marginally considering current. Since we are considered YoY growth, we have taken current prices.


The per capita income growth was also slightly better during the previous regime. But the difference is marginal.

However, this is not everything we should look at. The current government has improved the spending on health and education, subsidized water and electricity to drive growth which will have a long-term impact on development. But we should also not forget that this can happen when the state economy is healthy.

Hence it will be fair to say that while the previous congress government of Delhi left a healthy fiscal situation, the current AAP government has taken the legacy forward and changed the benchmark.

We will be economical with the truth to claim that the current revenue surplus is contributed by AAP alone. But the truth always has three sides – Your side, my side and the truth.

PrevPreviousAligarh Is Etched In Our Memory, Will Never Fade Away From Our Thoughts, Soul and Spirit
NextBonhomie between a Kashmiri Pandit Diwan and Muslim NawabNext
Author Related Post
Related Post

Budget Fails To Allocate Adequate Funds for Implementation of NEP 2020....