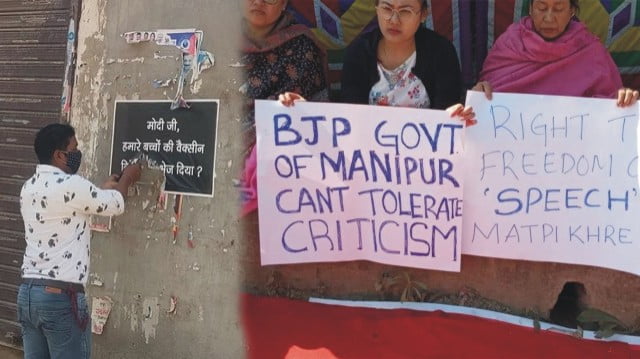 “The trouble with most of us is that we would rather be ruined by praise than saved by criticism.” –Norman Vincent Peale

No government likes criticism of its policies and functioning and would like to believe that it can do no wrong. However the recent tendency of arresting people, including journalists, even on very trivial issues and intolerance for any kind of criticism has plummeted to new depths. 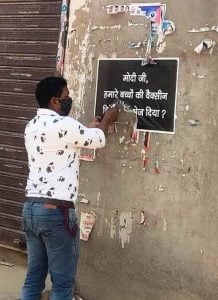 Delhi Police, under the control of the central government, last week arrested about 25 persons for allegedly pasting posters with comments critical of Prime Minister Narendra Modi regarding the Covid vaccination drive.

Among those arrested were a few unemployed youth, an auto rickshaw driver and a maker of wooden frames. Obviously they were hired by someone or some party and might not even be aware of what was written on the posters.

Subsequently thousands of people, including Congress leader Rahul Gandhi, posted the same question on social media. However, no action was taken against them.

Then there were reports from Amethi that a man had been arrested under the Epidemic Act, for allegedly creating fear among the people after he went on Twitter asking for an oxygen cylinder for his 88-year-old relative. All he had written was that an oxygen cylinder was required as soon as possible and had given his contact details.

Even though it is universally known that there is acute shortage of oxygen cylinder across the country, the local police claimed that he had made a “false claim”.

Around the same time the Manipur Police invoked the draconian National Security Act (NSA) against journalist Kishorchandra Wangkhem and activist Erendro Leichombam, who were arrested for saying that cow dung and cow urine were no cure for COVID-19 in social media posts.

The district magistrate concerned, while denying bail, said in his order for arrest that the two might “resume activities which are prejudicial to the security of the state and maintenance of public order on being released on bail”. 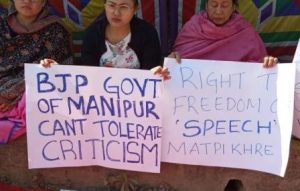 Not long ago the Bihar government had come out with a bizarre order that if your social media has “any offensive posts against the government, ministers, Parliamentarians, legislators, and state officials, it will be treated as cyber crime and invite penal action in the state of Bihar”.

A circular issued by a senior police officer said that it had “come to light that certain persons and organisations have been making defamatory and offensive comments on social media against the government, respected ministers, parliamentarians, legislators, and government officials”.

The officers obviously follow the indications from political bosses.

The Yogi Adityanath led Uttar Pradesh government has kept a Kerala journalist Siddique Kappan in custody since October under the draconian UAPA Act for trying to report on the rape and death of a Dalit girl in Harhras.

The Editors Guild of India had written a letter to the state Chief Minister in November last year highlighting several instances of state persecution and violence against journalists, including that of Kappan. Since then, the situation has only worsened.

Recently, the chief minister threatened to seize the property of anyone who reported on the paucity of oxygen in hospitals in the state even though it is the worst kept secret of the government.

As I said earlier, no government likes criticism but the governments headed by the Bharatiya Janata Party and its allies have shown a particular dislike and intolerance for any kind of criticism.

The imposition of emergency and media censorship by the Congress was the worst attack on the freedom of media in the country since the independence but the informal censorship through coercion and threats to arrest journalists and other citizens pose serious challenge to the democratic system of the country.

No wonder the freedom index of the country, the largest democracy in the world is plummeting and has reached a disgraceful position of 142 among 180 countries assessed in the latest World Press Freedom Index 2021.

WHAT DID THEY SMOKE? OXYGEN FROM LAHORE?

PrevPreviousWhy SELECTIVE SILENCE about citizen-led fact-finding missions has a role in discourse?
NextI SAW HISTORY BEING WRITTEN OUT ON THE ROADNext
Author Related Post