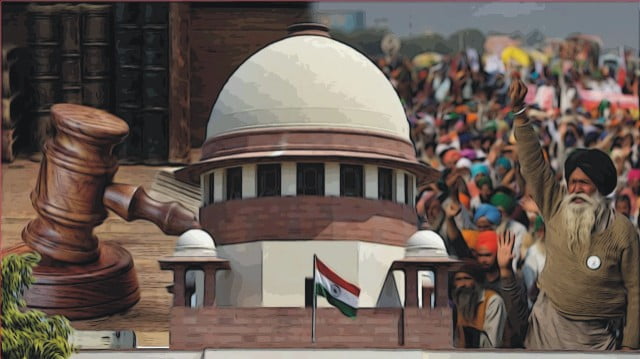 Supreme Court had erred in stepping into the issue.

SUPREME COURT’S unsolicited decision to set up an ‘expert’ committee, comprising four members who had been publicly hailing the new controversial farm laws, has only strengthened the worst fears of the agitating farmers and has dented its own credibility.

After raising hopes of the agitating farmers a day earlier by purportedly taking on the government and criticising it for mishandling the issue, the court has done only what would delight the government.

The least the highest court should have done was to include experts from various fields connected with farming who have an unblemished reputation and who could have given credible advise respected by all. It could have asked for suggestions on including names of unbiased experts.

All the four members, agricultural economists Dr Pramod Kumar Joshi and Professor Ashok Gulati, Shetkari Sanghatana president Anil Ghanwat, and national president of a splinter unit of the Bharatiya Kisan Union (BKU) Bhupinder Singh Mann, have at one time or the other backed the government on the new laws or had suggested only minor amendments.

The apex court has not clarified the criteria under which the four members of the committee were selected.

As anticipated, farmers’ leaders have rejected the directive of the highest court to hold the four contentious bills in suspension till it hears the views of the committee.

The manner in which the court handled the issue has added to the mess that has been created by the centre on the issue.

A section of intellectuals and commentators are of the view that, in the first place, the Supreme Court had erred in stepping into the issue.

They argue that the highest court had no business to intervene over the prolonged agitation and let the government do its job. It could have, however, intervened on the legality or otherwise of the new laws and could have stayed their operation till it studied the legal aspects of the bills.

The entire sequence of events leading to Chief Justice of India taking up the case, then seemingly criticising the government and finally appointing known supporters of the bills has put a question mark on the initiative taken by the court. Instead it has lent credibility to the suspicion that the government was part of the farce being enacted.

The apex court could have gained credibility and respect of the farmers and their supporters if it had stayed the operation of the new farm laws to study the legal aspects of the laws rather than to await the recommendations of the ‘expert’ committee. By doing so the highest court has nullified a good chance to redeem itself with sincerity of purpose.

The government has shown no inclination to soften its stand on the issue of repeal of the four Acts or even to hold these in abeyance for the time being.

Prime minister Narendra Modi is facing his first real challenge and would like to retain his image as a decisive and strong leader.

He has done everything, including visits to Gurdwaras and setting up meetings with farmers of Gujarat and Madhya Pradesh, except talk directly with the agitating farmers and their leaders.

Farmers unions too are firm on their demand for a repeal of the new laws. They have now announced gradual intensification of the agitation including a massive march to the interiors of Delhi.

Most constitutional and legal experts have questioned the move of the Supreme Court to intervene in the manner it did. They argue that the move has opened up Pandora’s box by crossing the line of its jurisdictions.

Yet it’s intervention had provided a ray of hope but it’s is good opportunity lost for a possible amiable solution to the vexed issue.