A NEW LOW IN PUBLIC MORALITY

Remission and Honouring of Gang Rape and Mass Murder Convicts; What next – Padma awards? 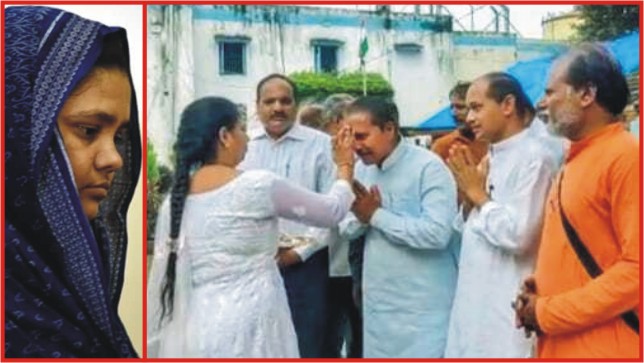 The ‘honouring’ of the convicts and the shameless defence of the act by a section of the society, shows that the poison of hate and communalism hasn’t abated.

A short video is doing the rounds of social media and electronic media these days which shows a couple of men garlanding a group of men and offering sweets to them. One of the men is also seen touching the feet of an elderly man in the group.

Generally it would pass off as a routine video in which a group of men are being honoured and someone seeking blessings from the elderly person.

But it is no ordinary video. These men had not returned after some heroic deed or after achieving something great. These men had been convicted for gang rape and murder and had been released on remission on the occasion of the 75th Independence Day of the country.

While we are increasingly getting used to lowering of moral values and inhuman acts by fellow citizens, this particular video has hit the nadir.

Welcoming back convicted rapists and murderers and then making a public display of the act should hurt the conscious of every literate person.

These 11 men, and perhaps some others, had indulged in the heinous crime of raping a six month pregnant Bilkis Bano after snatching away her three year old daughter whose head was smashed by hitting her against a wall. Seven other members of her family, including her mother and sister, were gang raped and killed in front of her.

It had happened in 2002 in the wake of massacres which took place after a rail compartment carrying Hindu pilgrims was put on fire in Godhra in Gujarat.

The rapists and killers were neighbours of the then 21-year old Bilkis Bano and had been living like a family till then. One of the rapist was old enough to be her father but they showed no mercy on the victims.

It was this group of monsters who were being garlanded and offered sweets as if they were political prisoners or had came back victorious from a war and not convicted rapists. Public honouring of such convicts just goes to show they the madness of 2002 has not ended yet.

While this act was abhorrent and would remain stuck in our collective memory, the conduct of the state government is no less condemnable.

It released them after granting remission on the Independence Day on the plea that the government of India had given directions to release convicts under various conditions. However, the conditions clearly mention that those accused of serious crimes like murder and rape would not be given remission.

The Gujarat government then took another alibi saying that the Supreme Court had directed the government to do so. It is also a half truth.

Ironically the decision to release the gang rape and murder convicts came on the day when the prime minister Narendra Modi has emphasised the need for empowerment of women during his speech from the Red Fort. 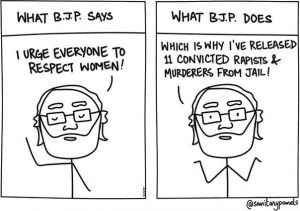 PM Modi had spoken of Nari Shakti and how they would be in the forefront to take the country ahead. “Can we not pledge to get rid of everything in our behaviour, culture and everyday life that humiliates and demeans women”, he had asked.

Supreme Court deserves kudos for pulling out the investigative and legal proceedings in the Bilkis Bano case from Gujarat, when the victim alleged that she was being threatened, and shifting it to Maharashtra.

The Special CBI Court in Mumbai convicted and sentenced the 11 men. Subsequently their conviction was upheld by the High Court. Supreme Court subsequently also awarded a compensation of Rs 50 lakh to the victim.

The same Supreme Court, which once spoke for the courageous woman who suffered so much and yet stood her ground, must intervene again and stop this injustice. Such remissions can send very wrong signals and are betrayal of the prime minister’s promise.

The ‘honouring’ of the convicts and the shameless defence of the act by a section of the society, shows that the poison of hate and communalism hasn’t abated. Rather it has spread over the period.