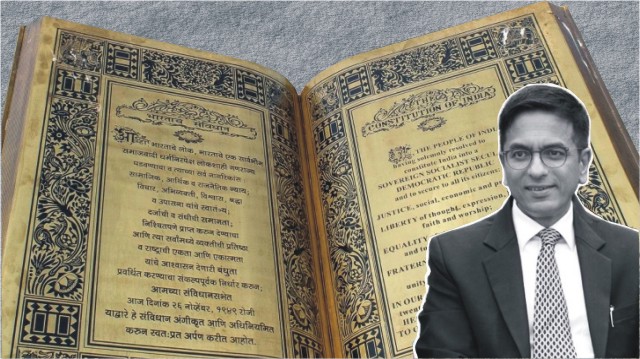 The basic structure of our Constitution gives a direction and guidance to those interpreting and implementing it like a pole star.

Chief Justice of India DY Chandrachud while speaking at the 18th Palkhiwala Memorial Lecture organised by the Bombay Bar Association on 21 January said that the 1973 court verdict shows the way to judges like a “north star” in understanding and implementing the Constitution.

In the changing times, judges interpret what is written in the Constitution and the verdict in the Kesavananda Bharti case helps in upholding the soul of the Indian Constitution.

“When the road ahead is complex, the basic structure of our Constitution gives a direction and guidance to those interpreting and implementing it like a pole star. The Constitution has been given the highest place in the basic form of the Constitution or its philosophy. It talks about the rule of law, power sharing, law review, secularism, federal structure, freedom and respect for every human being as well as national unity and integrity,” said the Chief Justice of India. 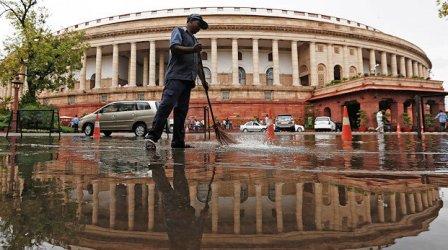 The Vice President of India who is also Rajya Sabha Chairman earlier said that he doesn’t subscribe to the Kesavananda Bharti case judgement which says that Parliament has the power to amend the Constitution but it cannot change its basic structure.

“If any institution on any basis strikes down the law passed by parliament, then it will not be good for democracy and would be difficult to say we are a democratic nation,” he said while addressing the 83rd All India Presiding Officers Conference in Jaipur.

Senior Supreme Court lawyer, Sanjay Hegde in his reaction on the ongoing debate of supremacy said, “The Vice President has been a Senior Advocate. He very well knows that the Basic Structure doctrine is 50 years old and settled law, since even before he became a lawyer. A constitutional authority suddenly asking for a reconsideration in the abstract, without any pending case in court, is surprising to say the least. The doctrine has been evolved to place certain parts of the constitution, out of the grasp of transient electoral majorities.”

“There must be a limit of spreading lies and falsehood about Constitutional provisions when politicians avail their right of freedom of speech and expression. This time a vicious campaign has been unleashed to depict the Doctrine of Basic Structure, a kind of obstacle to achieve the fascist agenda of the establishment. This time the ruling regime felt uncomfortable with the Doctrine of Basic Structure which was propounded by the Supreme Court in the Kesavanand Bharti case 1973,” said Dr Narender Nagarwal, Assistant Professor, Faculty of Law, University of Delhi

“The Doctrine of Basic Structure protect chief organ of the Constitution of India-like Federalism, Democracy, Judicial Review, Secular Character of Indian State, Independence of the Judiciary, Social Justice agenda of the State etc. The judgment serves as a safeguard for the Constitution against ruthless majoritarian control rather than merely being a verdict. The law of the basic structure serves as a reminder to the politicians that just because they have a resounding majority in the legislature, they do not automatically have the license to trample on the fundamental principles of the Indian Constitution,” added Nagarwal.

“Basically, the Vice President’s assertion regarding the Doctrine of Basic Structure is a hoax call to gain support for their abhorrent agenda to amend the Constitution drastically. Any attempts to vilify the Basic Structure theory ought to be viewed as an infringement on constitutional values and it will not be tolerated,” said Nagarwal.

Dr. V. Suresh, General Secretary, People’s Union for Civil Liberties (PUCL) said, “As the Modi government reaches the final stretch of its second five-year term, one can see the beginnings of its new priorities. The drumbeats against the judiciary, the lone institution which is not totally within its control, have become louder. Right from the Law Minister to the Vice President, questions are being raised about the judiciary and its way of functioning. The first salvo was against the collegium system and the mode of appointment of judges. Then the courts were excoriated (rightly so) for not being representative institutions in terms of caste background.”

He added, “The Vice President opened a fresh line of attack, criticizing the Supreme Court’s decision in ‘Kesavananda Bharati v State of Kerala’ as being ‘against democracy’. The Law Minister has now again upped the ante, by writing on 16th January, 2023 to the Chief Justice, asserting that the executive should be represented on Search – cum – Evaluation Committee’ (SEC) for appointment of judges to the Supreme Court. This latest demand flies in the face of the law laid down by the Supreme Court on how judges are to be appointed, keeping in mind the question of the independence of the judiciary.”

“An independent judiciary is the cornerstone of a constitutional democracy because it upholds the Constitution – its basic structure and system of checks and balances; protects the Fundamental Rights of citizens; and ensures through judicial review that the laws passed by the Parliament and the actions and policies of the Executive are in harmony with Constitutional principles. An independent judiciary is all the more critical in the present period, when the ruling party has used its brute majority in Parliament to ram through critical laws with hardly any discussion, within or outside Parliament, many of which have been constitutionally challenged before the Supreme Court,” said Suresh.

“One cannot ignore the reality of `majoritarianism’ posing a serious threat to the Constitutional values of secularism, federalism, social justice and socialism in our polity and society. What is to be noted is that the attack on the judiciary follows on the heels of a systematic subversion of other important constitutional institutions which are meant to play an independent role as monitors of democracy such as the Election Commission, NHRC, CBI, ED, IT Department, and other bodies,” said the general secretary of PUCL.