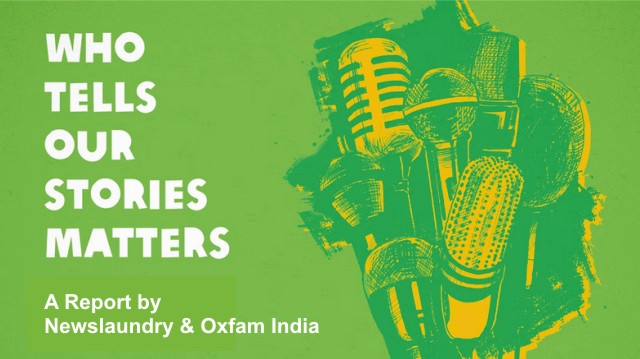 The second edition of Oxfam India- Newslaundry’s Report ‘Who tells our stories matters: Representation of Marginalised Caste Groups in Indian Media’ reveals that around 90% leadership positions in print, TV and digital media are occupied by General caste groups with no Scheduled Caste (SC) or Scheduled Tribe (ST) heading mainstream media outlets. A second media diversity survey after 2019 show less than 5% of panelists in Hindi and English TV debates were from SC or ST categories.

The report released on 14 October at The Media Rumble, South Asia’s largest news media forum also shows that every 3 out of 5 articles in Hindi and English newspapers are written by General caste authors while marginalised castes (SC, ST or OBC) only contribute to around 1 out of 5 articles.

Amitabh Behar, CEO, Oxfam India said, “Our second report in three years continue to show that newsrooms in India are not an inclusive place for marginalised communities in the country. The leaders of media organisations across all platforms continue to fail in creating an enabling environment for Dalits, Adivasis and Bahujans. The media in the country needs to uphold the constitutional principle of equality in not just its coverage but also in its hiring practices. It is critical that media organisations immediately conduct a significant overhaul of hiring practices and ensure that newsrooms across the country become more diverse and inclusive. This would be crucial for creating India without discrimination and injustice.”

The report studied around 43 Indian print, TV and digital media outlets for their coverage, social location of the leadership and caste composition of journalists employed by the organisations. The research which was conducted between April 2021 and March 2022 analysed over 20,000 magazine and newspaper articles, 2075 prime time debates with 76 anchors and 3318 panellists and 12 months of online news reports.

The research was conducted on qualitative parameters such as social location of authors/ participants, prominence of the news item and topic of news coverage. The report also examined representation of various caste groups among the staff of news organisation using survey, secondary sources of information and databases of UPSC and central universities.

The findings reflect marginal improvement in the overall representation of SC, ST and OBCs in the Indian media. The 12 months research shows the dominance of General caste groups’ across print, digital and electronics media in terms of leadership, by-lines,, opinion writing and content.

The earlier edition of the report in 2019 showed over 88% representation of journalists from the General category and this year, it is around 86%. While the biggest change can be seen in the SC category representation which has gained voice by 3.17% in 2022, up from none in 2019.

The analysis of 14 Hindi and English newspapers showed the organisations failed to employ SC/ST journalists to cover caste and tribal issues. More than half of the anchors from 8 news channels analysed for the study belong to upper caste groups while no channel had anchor from Dalit or Adivasi community to host the debate.

None of the 12 magazines analysed during the survey had members from the SC/ST community at the leadership position. The digital media platforms considered for the research period showed comparatively higher improvement in representation of SC and STs than print and electronic media. The SC and ST category representation in digital media has gone up by 11% and around 3%, respectively from earlier zero. While the OBC category has seen little increase, the General category representation is still around 77%.

Abhinandan Sekhri, CEO, Newslaundry said “The report captures the state of diversity in Indian newsrooms. Acknowledging the problem and diagnosing the fix is always the first step of any change. Hope editors and media owners can use its findings to make newsrooms more inclusive.”

Oxfam India is a movement of people working to end discrimination and create a free and just society. We work to ensure that Adivasis, Dalits, Muslims, and women and girls have safe violence-free lives with freedom to speak their minds, equal opportunities to realize their rights, and a discrimination-free future.