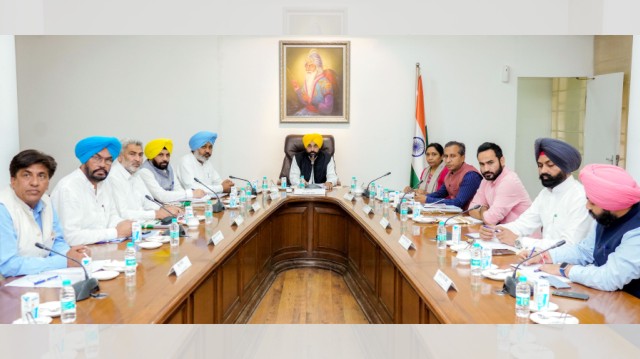 Does the cabinet of Bhagwant Mann led AAP government lack constitutional sanctity? Yes, in terms of First Proviso to Article 164(IA) of Constitution of India. Read on…

ON 16th March the Governor of Punjab, BL Purohit appointed Bhagwant Maan as Chief Minister of Punjab. He was administered Oath of Office and Secrecy by the Governor the same day.

On 21st March, the Governor again on the advice of CM Maan allocated respective portfolios as mentioned in State Government Business Allocation Rules, 2007 amongst all newly sworn in Cabinet Ministers including Mann who holds total 27 portfolios.

Meanwhile, on March 20 itself, I wrote to President of India, Prime Minister, Union Home Minister, Governor, CM and Chief Secretary of Punjab objecting to current strength of Mann’s Council of Ministers that is Eleven, which is one less than the Twelve, as mandated/prescribed in First Proviso to Article 164 (1A) of Constitution of India wherein it is explicitly mentioned that the number of Ministers, including the Chief Minister in a State shall not be less than twelve.

It is also noteworthy to mention here that the herein before mentioned First Proviso to Article 164 (IA) uses the word “shall” and not “may” hence it is nothing but compulsory/mandatory that the total strength of Council of Ministers in every State (including Punjab) at any given point of time shall (should) not be less than Twelve.

Also, till date there has been no authoritative judicial pronouncement (read any Reportable Judgment which acts as a binding precedent) by any Constitutional Court in India i.e. either by Hon’ble Supreme Court of India or else any High Court(s) in India including the jurisdictional Hon’ble Punjab & Haryana High Court on this very issue i.e. if total strength of Council of Ministers in a State in India can be less than 12 at any given point of time.

Hence, until and unless the strength of Punjab’s current Council of Ministers is raised from current 11 to 12, it nevertheless lacks legal (read constitutional ) sanctity in terms of First Proviso to Article 164(IA) of Constitution of India.

As a consequence thereof, there would be serious question marks over the decisions taken by such Council of Ministers/Cabinet with less than 12 Ministers including the Chief Minister as in case of Punjab currently. The first and only meeting of Punjab’s new Cabinet till date was held this past Saturday immediately after swearing in ceremony of 10 Cabinet Ministers.

Meanwhile, it has been two weeks but I am yet to get any sort of response or reply from Punjab Raj Bhawan. However, I got an email (cc copy) from the Office of Principal Secretary to CM a week back on March 21 from which it came to light that the matter has been forwarded to Secretary (PA- Political Affairs) and Superintendent (FUP) in CM Office, Punjab.

The writer is an Advocate at Punjab & Haryana High Court, Chandigarh. He has been writing on issues concerning administration, governance and law especially pertaining to the Constitution.