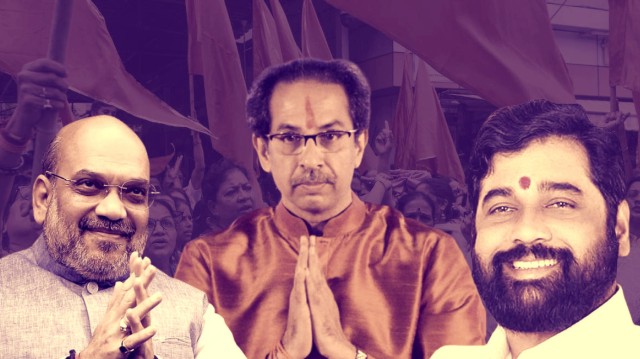 By naming Shinde for the top post, the BJP has made a desperate attempt to tackle the criticism that it is power-hungry.

An old saying that any smart person can kill two birds with one stone seems to have been rendered irrelevant especially when Modi-Saha-Nadda and RSS combine have killed several birds with one stone, leading to unexpected and stunning strategy to weaken Uddhav Thackeray after anointing Eknath Shinde, a normal Shiv Sainik, as new chief minister of Maharashtra.

Sharad Pawar had outsmarted BJP’s ‘Chanakya’, Amit Shah, two and half years ago when Uddhav Thackeray ditched saffron party to become CM. But now sweet revenge has been taken by engineering defections in Shiv Sena to pull down Maha Vikas Aghadi (MVA government thereby replacing it by Shinde-Fadnavis combine.

Second, the saffron party has settled the scores with Uddhav Thackeray who had preferred Congress and NCP though assembly polls were fought by Shiv Sena and BJP together in 2017.

Third, central leaders have also avenged the humiliation faced by the party when Fadnavis was sworn in the morning but Sharad Pawar’s Chanakya Niti had outsmarted Modi-Shah combine as government fell in six days.

Fourth, BJP has anointed grassroots Shiv Sainik to counter the allegation of being hungry for power which will be an effective election plank to hit against Uddhav who has been promoting himself and his son.

Fifth, caste equations may also change as Shinde is a Maratha which may create an impact in the entire state.

BJP has avenged its six day tenure of Devender Fadnavis, and tried to sell the perception that it has not toppled the government but Shiv Sena was itself responsible for the current political crisis and toppling of two and half years old MVA government in Maharashtra.

By naming Mr Shinde for the top post, the BJP has made a desperate attempt to tackle the criticism that it is power-hungry, though the world knows the defection game engineered by Saffron Party which has got its trail from Mumbai to Surat to Goa.

BJP is known for social engineering, hence it has targeted 30 percent Marthas as Shinde belongs to the Kunbi clan whereas Fadnavis is a Brahmin community which constitutes only 3 % of overall population which was the primary reason for his opposition in 2014 when he became chief minister and faced Marathas agitation.

Uddhav Thackeray’s last minute emotional appeal did not work as defectors had finalised the new government formation with BJP, though Shinde had tried to ward off the impression that toppling plan was given final shape in Delhi; though he offered to stay in Shiv Sena of Uddhav but severed his ties with Congress and NCP to have an alliance with BJP.

Shinde kept on hammering on the point that Uddhav has compromised with Bala Saheb Thackeray’s core ideals of Hindutva after being guided by alliance partners who dominate the state government. Now he may stake claim to be real Shiv Sena and real representatives of Bala Saheb.

BJP has also tried to show that it has helped grassrootss Shiv Sainik to occupy top slot and accused Uddhav Thackeray of promoting family rule, including his son Aditya Thackeray.

On the contrary, analysts opine that Uddhav may utilize, as a last weapon, an emotional appeal of betrayal by Shinde who was promoted by Baba Saheb and himself.

Uddhav may also throw light on the faith reposed in him, allocating important portfolios besides having unflinching faith on Shinde who has done breach of trust, hence must be punished by Sainiks who dominate Mumbai city.

Shinde was reportedly managing the funds for Shiv Sena which reflects the level of confidence of Uddhav Thackeray in his manipulating power and management skill. But now he is feeling cheated after the government has been pulled down by his own close confidants.

After the failure of the RJD-JD (U) alliance in Bihar, the MVA kindled hope in non-BJP circles that the BJP can be kept out of power through such an alliance which was successful in local elections when the total percentage of votes of Shiv Sena, Congress, and NCP had outsmarted BJP candidates.

Nitish Kumar had parted with RJD and returned to BJP fold in Bihar and the government is stable. Similarly, BJP has tried to win back one faction of Shiv Sena and will jointly fight polls in future which may benefit it.

With an eye of 2024 parliamentary polls and Mumbai Municipal Corporations elections, besides preserving core element of Hindutva, Bhartiya Janta Party has toppled an elected government of Maha Vikas Aghadi (MVA) headed by Uddhav Thackeray, 5th in row after Uttarakhand, Arunachal Pradesh, Karnataka and Bihar which gave an opportunity to an auto rickshaw driver–turned-minister to become chief minister of the business capital of India.

As per indications, BJP leaders and cadres are stunned over high command’s decision to ignore Fadnavis, who will be de-facto CM while running the government.

BJP high command may gradually convince the workers because the real test will be in 2024 parliamentary polls and it has got plan to increase its tally of 23 seats to higher level in Maharashtra especially after getting support of Shinde group which assumes a lot of significance for prime minister Modi to retain power.

Now the ball is in Uddhav Thackeray’s court to foil the attempt of Shinde to gain control of Shiv Sena which will be possible only if he exploits betrayal part of the present chief minister and lay claim on Baba Saheb’s legacy based.

PrevPreviousAct like a President
NextRewriting History: There are grave implications of the changes being made in school syllabus which will have long term impact on the societyNext
Author Related Post
Related Post