Bhagwant Mann has violated the ‘Oath of Secrecy’

By releasing to the media in advance, the most sensitive and confidential correspondence between him and the Governor of Punjab 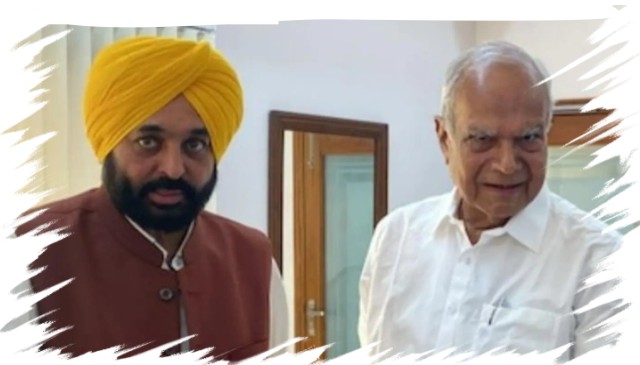 The Governor of Punjab Banwarilal Purohit and the CM Punjab Bhagwant Mann are seemingly at logger head for quite some time.

The Governor of Punjab Banwarilal Purohit and the Chief Minister of Punjab Bhagwant Mann are seemingly at logger head for quite some time, may be lack of proper coordination and understanding between these two, most important constitutional offices. 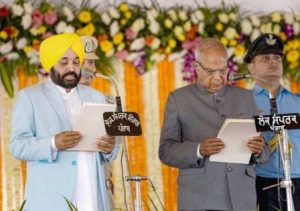 The role and the overriding authority of the Governor is clearly defined and thoroughly articulated under Article 167 and 168 of the constitution. Schedule 3 of the Indian Constitution deals with the Oaths or Affirmations and also an oath of Secrecy for Ministers of the States that includes the Chief Minister of the State.

The Oath of Secrecy that was administered to Bhagwant Mann by the Governor Banwarilal Purohit in a stipulated format of the oath form says :

Now in the current tug of war between the Governor and the Chief Minister over the issue of appointment of Dr. Satbir Singh Gosal as the Vice Chancellor of The Punjab Agriculture University, Ludhiana, rather than sorting out the issue amicably with Governor of the State, The Chief Minister Bhagwant Mann has committed another wrong and further vexed the tangle and complicated the issue beyond comprehension.

The Punjab Raj Bhawan in the milieu of the controversy, over two unidentical letters, purported to have written by the CM, has the upper hand; because the one letter written in English was sent to the Governor and the other one circulated to the media in advance, was written in Punjabi and was also posted on the Twitter of the Chief Minister.

Surprisingly transcript of both the letters (English and Punjabi) materially differs from each other in conveying entirely different connotation and nuance, one written in English is seemingly quite mild and modest but the other in Punjabi is more contemptuous in construct and the tone and tenor of its panorama is blatantly arrogant and also in the bad taste .

I am of the considered view that the classified communication between the Chief Minster and the Governor of the State over a contentious issue, should have been handled more carefully by the office of the Chief Minister by marking it as ‘Strictly Confidential’ under the ‘communiqué protocol’ and should not have released to the media, at all.

The Chief Minister’s office must know that the Twitter is not the ‘Secretly notified letter Box of the Governor’ and the Governor is right in his ‘Constitutional Dignity’ if he takes serious view of such a misdemeanor of debased equilibrium of protocol consciousness in the the CMO, that apparently lacks sagaciousness and delicate political acumen.

Such a ‘conspicuously sensitive correspondence’ with the Governor, containing divergent views, if released to the press puerilely, it certainly amounts to a deliberate attempt to disparage the dignity of the Constitutional Head of the State i.e. the Governor of Punjab and the Chief Minister Bhagwant Mann could squarely be blamed and charged for the violation of the Oath of Secrecy, administered to him while assuming office of Chief Minister by the Governor Banwarilal Purohit.

In this context, its pertinent to mention here that such a mishandling of classified correspondence between the Governor and the Chief Minister can incur criminal penalties and the violation of the Oath of Secrecy administered to the Chief Minister; entails the termination of the tenure of the office and most importantly this power can be exercised by the appointing authority under the constitution.

Therefor I would suggest the Chief Minister Punjab Bhagwant Mann, who is much younger to me in age, that he should handle his desk very carefully and sort out issues with the Governor as early as possible and also bring competent officers in his office, helpful to smoothen the system of stately Governance and all such officers responsible for the serious lapses and creating unnecessary ruckus in the corridor of powers almost every day must be shown the door forthwith.

PrevPreviousPhase out English intelligently. But prepare Indian languages for the difficult task first
NextSangh Parivar – Whatever the Motive Behind a Shift in the Stance on Minorities, A Glimmer of Hope is Better than the Growing DespondencyNext
Author Related Post
Related Post