Last opportunity for Badals to stand with the farmers

To observe September 14, as the ‘Doomsday’ for the destiny of the farming community in India, wear black turbans, dupattas or badges 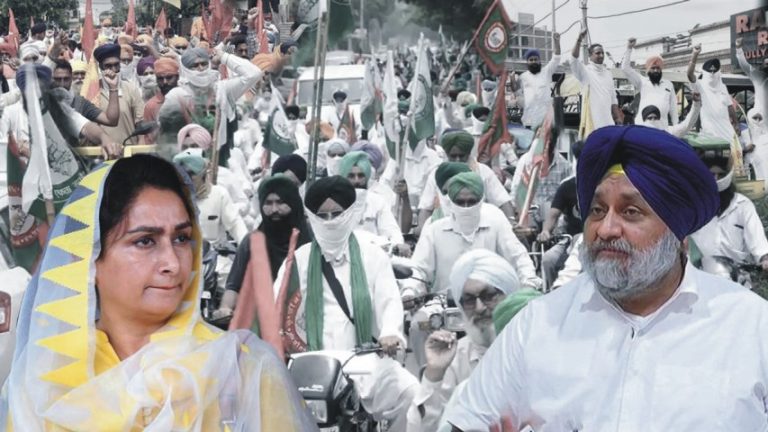 Badals’ treacherous betrayal of the farmers struggle would be recorded as a ‘black chapter’ in the history.

Monday 14th September 2020 is likely to prove a ‘Doomsday‘ for the farming community of India, because all the three anti-farmers Agri-ordinances, promulgated by the President of India Ram Nath Kovind on 5th June 2020 as approved by the cabinet on 3rd June 2020, are now being tabled in the Parliament in the form of Bill.

These Bills are listed in the list of business, circulated by the Lok Sabha Secretariat of the Parliament for their introduction on Monday, September 14, 2020.

It appears that the Government of India under the leadership of Narinder Modi, is adamantly determined to hit the fundamental interest of the farmers, favoring the corporate houses and big businessmen.

The bills if passed in Parliament as such would not only replace the half a century old time tested MSP regime, it would also completely destroy the age old existing marketing system of the agriculture produce.

The 14th of September 2020, should be observed as the ‘Doomsday’ for the destiny of the farming community in India.

All the farmers and Kisaan Unions must wear Black Turbans and black Dupattas or wear Black Badges in protest against the introduction of this Anti-Farmer’s Bill in the Parliament.

I would also appeal to all the farmers’ friendly members of Parliament to vehemently oppose the Bills on the introductory stage in a befitting manner.

The farmers would expect that all the MPs, opposed to these anti-farmer Bills should also wear Black badges, if possible, as a symbol of protest and also to express solidarity with the farmers of India.

It is also the last opportunity for Sukhbir Badal MP and his wife Harsimrat Badal, Union Minister to stand with the farmers of Punjab.

Consequently, Harsimrat Badal must resign from the cabinet as minister, latest by Sunday evening, before the introduction of anti-farmers Bills in Parliament, otherwise their treacherous betrayal of the farmers struggle in Punjab, would be recorded as a ‘black chapter’ in the current history of Punjab.