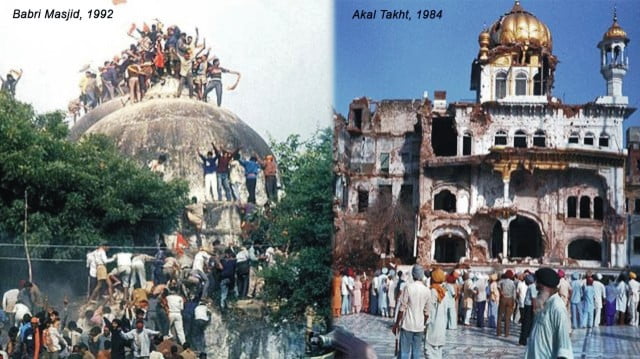 Before Babri this happened at a much larger scale during Operation Blue Star.

THE RECENT decision on Babri Masjid is yet another instance of the nation state betraying the faith of its biggest religious minority – the Muslims. Yet, its fallout must not be seen as only limited to Muslim grief. Any person who cares for the nation must feel pained and introspect what kind of a nation we are fathoming.

Twenty-eight years after the Babri Masjid was demolished by a mob, the special Central Bureau of Investigation (CBI) court acquitted all 32 accused citing lack of evidence. Through this judgement, Special Judge S K Yadav basically trashed his own organisation by questioning the validity of thousands of photographs, video records, print stories, essays and books written on the events of December 6, 1992.

Any community, society, nation is built on the twin pillars of faith in the system and belonging to the land or society. While both faith and belonging are abstracts, they are established and eroded by all the tangible steps the ones tasked with running the society or nation take to either keep its people together or squander its people.

Through the Babri case, a water-shed event in India’s life, and how the case has developed and justice been denied, it is very clear through the past three decades that with the rise of Hindutva forces, majoritarian will prevails in the country.

Before Babri this happened at a much larger scale during Operation Blue Star when the Indian Army invaded Darbar Sahib complex and thousands died. Even in terms of status of centre of faith and reverence, the Darbar Sahib for Sikhs is akin to Mecca for Muslims. That is why, for Punjab, the betrayal is familiar.

To understand this betrayal, we need to look at the key words from the Preamble of India’s Constitution. No, not the word Secular which some could argue was a later insertion. The words:

EQUALITY of status and of opportunity;

and to promote among them all FRATERNITY

These words were borrowed from the French Revolution (5 May 1789 – 9 Nov 1799). The Revolution upturned Monarchy and established Democracy the way we now know it. This democracy is based on the idea of a ‘social contract’. A social contract is when the government and the citizens enter a pact that both will contribute to each other.

The citizens will pay taxes, follow rules, conduct themselves honourably. The government would, in turn, preserve the citizens right to property, to freedoms and to faith. The destruction of Babri Masjid and the Akal Takht before that is a violation of the government in fulfilling its part of the social contract.

The double blow to our system of democracy is that no justice or even a full disclosure followed Operation Blue Star and no justice has followed the Babri Masjid demolition. This reduces the minority citizens of the nation into a reduced state of citizenship.

Incidentally, Judge Yadav started his career as a judge in Ayodhya in 1990, and has retired after pronouncing the Babri demolition verdict last Wednesday. This follows the pattern of earlier Chief Justice Rajan Gogoi who retired after holding the Babri demolition as illegal, ordered the disputed land (2.77 acres) to be handed over to a trust (to be created by Government of India) to build the Ram Janmabhoomi temple.

Gogoi was awarded with a Rajya Sabha seat. One wonders what would be Yadav’s reward. The judgement is not just a black mark on India. The denial of justice heralds a new India. India’s transition to Hindu Rashtra means that the minority religions have will have to lump this injustice and continue to live with their heads bowed. Many more injustices will follow and the system would not care.