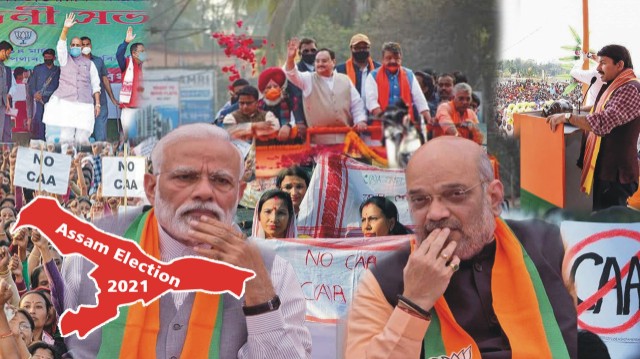 BJP is taking a contradictory stand on the issue of CAA in the two neighbouring states, Assam and West Bengal

Unlike West Bengal, where it is a direct and high pitched fight between Mamata Banerjee’s Trinamool Congress and the Bharatiya Janata Party, Assam is witnessing a close contest between the ruling BJP and the Congress led alliance called ‘mahajot’.

In West Bengal the BJP is banking on anti incumbency factor against Mamata Banerjee who is seeking a third straight term as chief minister, in Assam the BJP is attempting to retain its citadel against a resurgent Congress led alliance.

It had snatched power from the Congress in 2016 mainly due to anti incumbency factor against the Congress which had been in the power for over a decade. Its victory in Assam had opened the gateway for it in the north east where it is the dominating power in the region.

Ironically the BJP is taking a virtually contradictory stand on the controversial issue of Citizens Amendment Act (CAA) in the two neighbouring states.

While it has made it an important plank and one of the most important promises in West Bengal, the party’s manifesto in Assam is silent on the issue of CAA.

It had brought in the law to make political gains in West Bengal and Assam but it faced stiff opposition in Assam due to the complex demographics of Assam. The act was supposed to please the sections of Assamese who thought that Muslim migrants from the neighbouring Bangladesh were infiltrating into Assam and might outnumber the natives.

However the BJP perhaps did not anticipate that the locals were also strongly opposed to infiltration of Hindus from Bangladesh and for the same reason that they may outnumber the Assamese speaking Hindus of the state.

The passing of the law had led to very strong protests, particularly in the upper Assam region, which had backed the BJP in the previous elections. As luck would have it, the agitation petered away with the outbreak of covid pandemic.

The Congress has now made CAA as one of its most important planks and has declared that it would not allow its implementation in the state. The moot question now is whether it remains an important enough issue for this elections.

In case the simmering resentment against the Act is reflected in the voting patterns, the Congress would stand to gain. BJP, on the other hand, is trying to ignore the issue and is being non-committal on the issue of its implementation.

In these elections, the Congress is also trying to project itself as a party for all Assamese rather than its previous focus on minorities, tribals and tea garden workers.

Asom Gana Parishad, which held away in the state as a representative of the indigenous Assamese, is now an alliance partner of the BJP but has a rather limited support in the state.

BJP has a popular chief minister in Sarbananda Sonowal who has done commendable job in building infrastructure in the state.

Congress, on the other hand, is going with its young but untested Gaurav Gogoi. He has the advantage of the goodwill left for his father and former chief minister, the late Tarun Gogoi.

The BJP led alliance had won the previous assembly elections by a narrow margin and the opinion polls are claiming a potential close call even this time.

It is the only state going to the polls where the Congress has some chance of a victory. If that happens, the party might have some chances of revival elsewhere.

BJP, on the other hand, is leaving no stone unturned even though it has put its might to win the West Bengal elections. The retention of power in Assam would reflect that the fallout of pandemic including the massive unemployment and staggering economy had not dented its popularity. The counting and results on May 2 would be keenly watched.

PrevPreviousCentre wants to give farmers what they wanted, Farmers all set to fight against it
NextWomen empowerment: India’s dismal show in the international gender gap rankingsNext
Author Related Post
Related Post