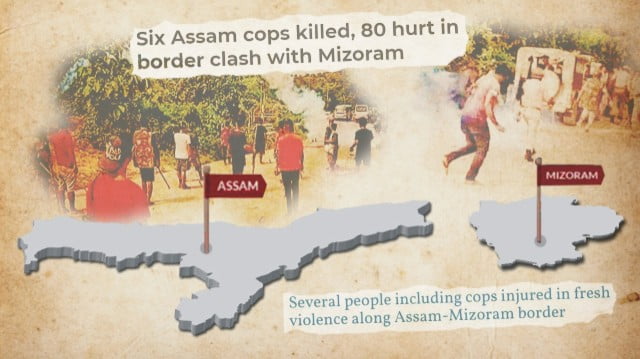 Assam is part of four of at least seven border disputes India is currently witnessing.

IT’S NEARLY 75 years since India attained independence from the British rule but we continue to suffer from the legacy and the disputes left by them.

The tendency of the governments has been to linger on with sensitive issues and avoid any resolution of disputes.

This is due to lack of effective and efficient leadership which would rather shift the resolution of issues to the next government than take any decisive measures.

The present government at the Centre has, for a change, taken several decisive steps but it’s only where it suits the ruling party and its agenda.

The flare up in the Assam-Mizoram border, in which at least five Assam policemen were killed and 60 injured, is the latest instance of the disputes allowed to linger on since the independence.

Ironically both the state governments involved are part of the National Democratic Alliance ruling at the Centre.

The violent clash took place between the armed police forces of Assam and Mizoram despite the Union Home Minister meeting the Chief Ministers of north eastern states only two days before the clash.

Amit Shah had emphasised the need for cooperation among these states.

He did intervene on the day of the clash but it was too late and the Chief Ministers of the two states must share the blame for the clash which, perhaps for the first time, involved firing by automatic weapons by any state police against another state police.

The conflict-ridden history of this 165 kilometres border, lined by the Barak Valley – Cachar, Hailakandi, and Karimganj on the Assam side, and Kolasib, Aizawl, and Mamit on the Mizoram side, is nearly two centuries old.

Over the years it has become an emotional issue between the people living along the disputed fertile land. There has been several clashes including one last year but the direct involvement of armed police from both sides had been avoided in the past.

Yet this is not the first instance of police forces of two states clashing over an inter-state land dispute.

Incidentally Assam, which is the gateway to the north east part of the country, is facing similar disputes with its neighbouring states of Manipur, Nagaland, Meghalaya and Arunachal Pradesh besides Mizoram.

In fact one of the reasons for the emergence of these states was the assertion of Assam and its attempt to dominate the culture and way of living in these areas.

In the decades after Independence, states and UTs were carved out of the larger Assam province – Nagaland, Manipur, Arunachal Pradesh, Meghalaya and Mizoram. 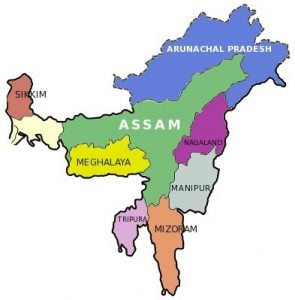 Assam is part of four of at least seven border disputes India is currently witnessing, as per the Union Home Ministry data.

In a written reply to Lok Sabha on Tuesday, Nityanand Rai, the Minister of State for Home Affairs, said border conflicts lead to occasional protests and incidents of violence are reported from some of these areas.

There have been violent clashes in the past on Assam’s border with Meghalaya, Manipur, Nagaland and Arunachal Pradesh. The police forces of Assam and Meghalaya too had clashed in the past leading to loss of lives.

There have also been reports of tension between Maharashtra and Karnataka over the border dispute between the two states. 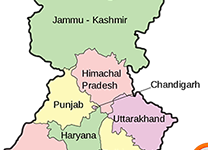 Himachal too has dispute with Haryana and Jammu-Kashmir but there have been no reports of any clash.

Even the dispute over Chandigarh and some other areas between Punjab and Haryana is pending and is raked up in the eve of elections.

The central government must intervene and set up an inter-state border commission to resolve all such disputes. It has acted in a decisive manner on some issues. It must do in the case of inter-state issues too.

Why I am a vaccine skeptic’