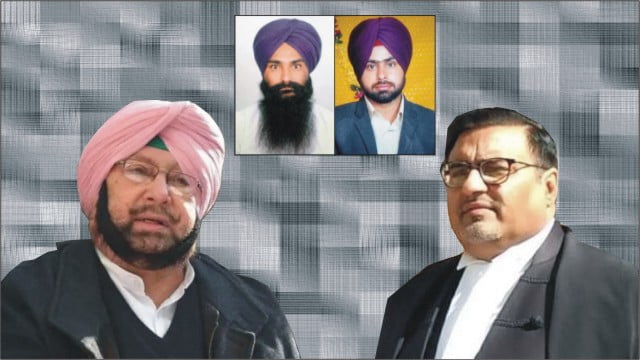 Political and bureaucratic circles in Punjab have remained agog for years now about the AG’s role in gunning for a top bureaucrat.

PUNJAB’s Attorney General and close confidante of Punjab CM Amarinder Singh, Atul Nanda, is once again proving to be a key problematic person for the reputation of the CM and the Congress government.

Nanda, who earlier faced intense criticism from state Congress head Sunil Jakhar, party’s Rajya Sabha MP Partap Singh Bajwa and estranged party MLA Navjot Singh Sidhu, has now come under attack from a family with whom he people of Punjab and Sikhs across the world have a deep emotional connection.

The family of Krishan Bhagwan Singh, who was killed in police firing at Behbal Kalan in 2015, today declared it will not cooperate with the new SIT set up by the Amarinder Singh government and also declared Punjab’s Attorney General Atul Nanda as a ‘Dalal’ who failed to put up correct legal defence in the case in High Court. (See video)

Krishan Bhagwan Singh’s son Sukhraj Singh told the media that the Amarinder Singh government was indulging in partisan politics with an eye on upcoming Assembly elections.

On Atul Nanda, Sukhraj Singh said Amarinder Singh government came to power on the basis of false promises of delivering justice, but is now claiming getting back the investigation from the CBI in three and a half years as its achievement.

Nanda has been repeatedly accused of being behind many a palace intrigues but continues to be a member of the coterie surrounding the chief minister.

Political and bureaucratic circles in Punjab have remained agog for years now about the AG’s role in gunning for a top bureaucrat and another confidant of Punjab CM upon him the CM otherwise relies completely.

The latest salvo fired by the family of a martyr of the Behbal Kalan protests firing has only brought more trouble and reputational damage to Amarinder Singh’s standing at a time when Sikh masses are already angry over denial of justice.

With two separate judicial commissions of inquiry, three police investigation teams besides a probe by the CBI, and now a new SIT facing flak from key stakeholders even before it began work, Amarinder Singh government is doing itself little credit by having AG Atul Nanda at the centre of crucial cases in courts.

Unlike a police officer like IG Kunwar, who enjoyed a ‘no-nonsense officer’ image, Nanda has hardly won any accolades for his legal acumen, and instead, Sunil Jakhar and many other political leaders have repeatedly reminded the people of Punjab about the capacities of Nanda.

With around 170 incidents of sacrilege of Sikh, Hindu and Muslim religion reported in Punjab, the Amarinder Singh government had only this month set up the new investigation panel — seventh such body — after a Punjab and Haryana High Court order, into the Kotkapura police firing incident.

With Punjab going to elections early next year and a poor performance on the health care front in times of pandemic, the latest criticism of the SIT and the family of a martyr labelling Amarinder’s close associate top law officer of the state as a ‘dalaal’ likely to cost the government dearly, many party leaders have demanded replacing the AG.

Nanda, however, continues to be the blue-eyed boy of the CM, sources said.