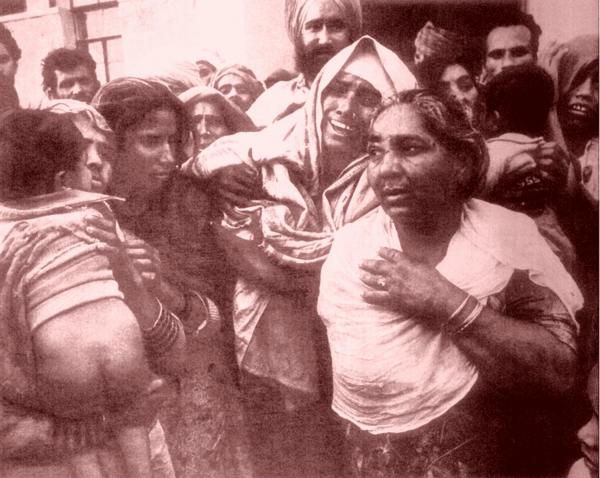 1984 – A Love Story. They burnt alive her husband, she watched silently. Should she have shouted?

There is a silly notion being floated for a few years now that claims that Sikhs are demanding justice for the 1984 genocide. Indian TV and print media happily fuel such a narrative, repeatedly peddling the clichéd line that Sikhs have been waiting for justice for a long time.

If it weren’t so tragic, I would have laughed at the ridiculousness of it all.

No one demands justice for thirty-six years.

36th does not sound like much of an anniversary. In some grotesque sort of way, it is less sexy than 25th or 30th or a 50th anniversary. It’s a truth in the times we live, the times defined by our hyper news media.

When Sikhs were marking in 2009 the 25th anniversary of the 1984 killings, there was a great deal of hype about justice denied. HS Phoolka was still to turn a politician, and he lent his name and possibly some work to a book written by Manoj Mitta. Clearly, some bright book-peddling expert must have suggested that it be released by a “riot victim.”

That’s when I met Sanmeet Kaur. No, she wasn’t a “riot victim”. Her mother was. Sanmeet was a fragile bundle, very delicate. She wasn’t even two; her second b’day was still a few weeks away. Sanmeet had a deep connection with the idea of search for justice.

In 1984, Sanmeet wasn’t around, but questions from 1984 will be existential questions all her life for her, and no Proust could philosophize them enough to help her make sense of it all.

At the book release function, her mother Kulbir Kaur fawned over her all the time. In 1984, Kulbir was even younger than Sanmeet was in 2009. She was just two-months-old – “I was also very chubby” – and was cradled in the arms of her mother Mohinder Kaur, who was all of 25 years of age at that time.

Today, after 36 years, the victims of 1984 are not demanding justice. They are not even there. No one remains the same after three decades.

On November 1 of 1984, Mohinder Kaur carried Kulbir in her arms on the Delhi railway station. Delhi was not under any deathly silence; instead, there was dance of death all around. The goons armed with kerosene canisters were perhaps angry that long-haired people being burnt alive were making hell of a noise, resisting a little bit too much.

But Kulbir hardly seemed bothered. She was asleep. Mohinder Kaur wasn’t paying much attention to that beautiful bundle in her arms. Something else was demanding her attention.

Her husband, Gurmej Singh, father of the two-month-old Kulbir Kaur, was being burnt alive a few yards away on the railway platform. They had spotted him, had pulled him out and given him no choice. They had unlimited supply of used tires and kerosene, and loved a spectacle.

Mohinder Kaur watched, every nerve in her body straining and pulling at her heart strings to rush out and fend off the goons who were assaulting her husband and throwing burning tires around his neck. She wanted to fend for him, to throw herself over him, to take the blows, to extinguish the flames, to save her husband, or perhaps die with him.

But a bundle wrapped in a towel was stopping her. She needed to first get rid of the cherubic baby; left to herself she would have flung herself on her husband. She knew the odds. One step out of the train, one cry for her husband, one shout for help, and her religion would have been writ large on her face. The goons were in no hurry, they were searching for more Sikhs to be burnt, and there seemed little compunction in burning two-month-olds.

Mohinder Kaur watched hell’s fury from the train as the absence of the Indian nation state wrote the damning fate of the two-month-old Kulbir.

I saw Kulbir Kaur a quarter century later, in 2009. She was 25. The chubby smile had long gone, the weary one had set in. She had seen too many summers to know that trees that fall in winter shake the earth. The activist lawyer, whose book was being released, presented a copy of the book to Kulbir Kaur. Carefully cradling Sanmeet in one arm, she unwrapped the book.

It was getting too surreal for the woman who was all of two-months-old when she had seen so much blood. Mohinder Kaur stepped ahead and offered to carry Sanmeet in her arms. In 25 years, one two-months-old had grown up enough to understand what denial of justice means.

And no one was putting much money on what kind of book Sanmeet could possibly be releasing after 25 years.

“You mean she watched her husband being burnt alive and she did not step out from the train?” an innocent young journalist working for an English daily that exhorts its readers to graduate to the times asked me.

“Do you see her releasing the book?” I was forced to ask.

“Well, if she had, you would not have seen her.”

We now use a calendar to remember the pain of others. So we recall the 1984 massacres around the end of October or the beginning of November every year.

Today, after 36 years, the victims of 1984 are not demanding justice. They are not even there. No one remains the same after three decades. The young who needed justice are middle aged now. The middle aged who watched people being burnt alive because they had long hair, are in their 80s or 90s. The wise old men and women passed away long ago. The men who sported just sprouting moustaches have salt and pepper beards now.

A Nigerian proverb that underlines a pragmatic approach to justice delivery mechanism says justice should ideally come before the sole of your shoe wears off.

Kulbir has grown out of so many shoes by now. And Sanmeet will soon be asking for new ones.

It is now for India to search for justice for itself. Destiny has decided that India will forever live with the shame of genocide against Sikhs.

Has India decided to live forever with the reality that it never prosecuted the murderers of more than 3,000 men and women?

We now use a calendar to remember the pain of others. So we recall the 1984 massacres around the end of October or the beginning of November every year.

So we recall it every November 1 – appropriately, because that’s the day they burnt her grandfather.

We are something between humans, and …?

The Comfort of Objects – Walking the streets of Trilokpuri

SAD-BJP rumblings: what about Sikhs who live in India but outside Punjab?